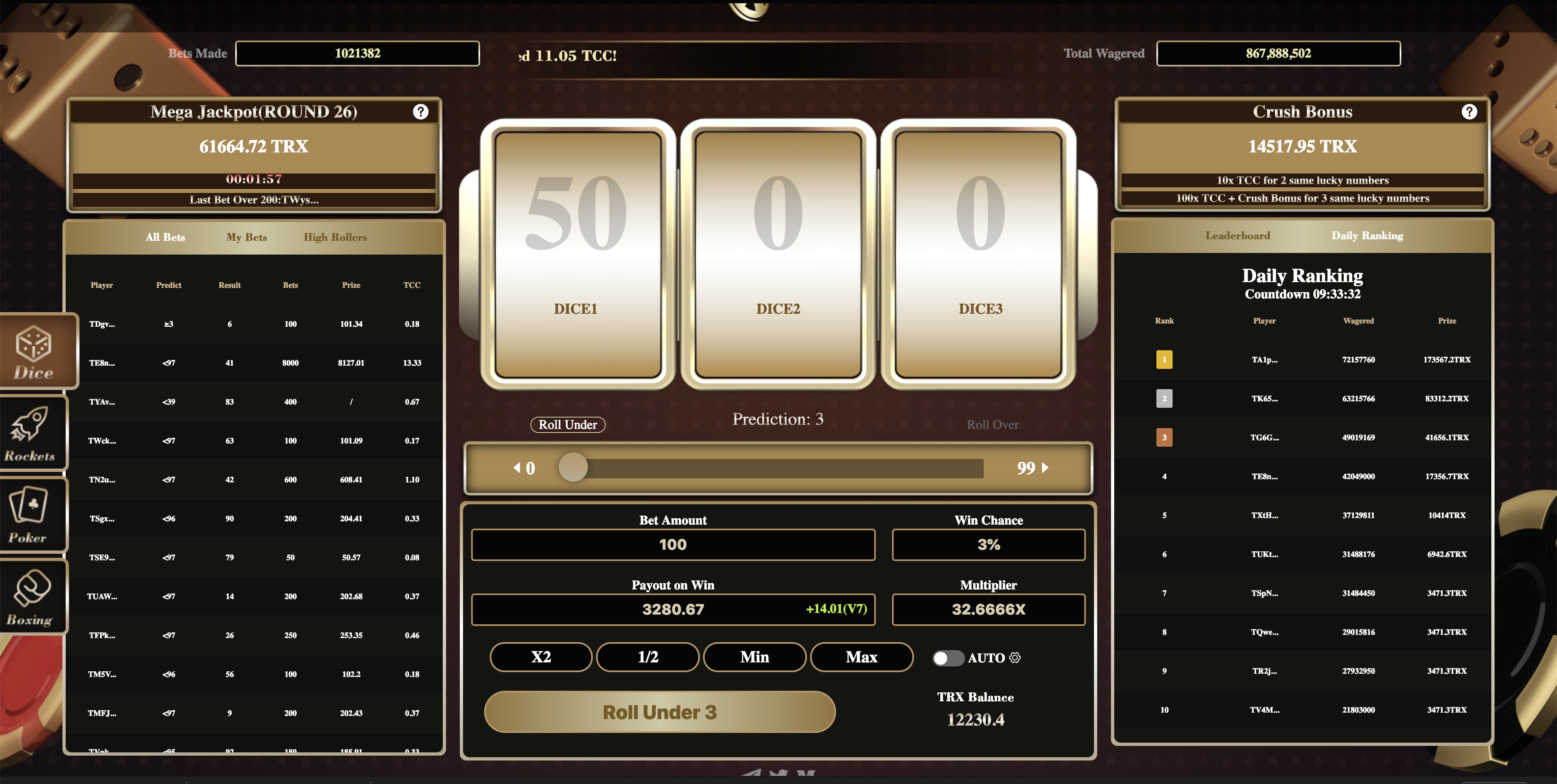 (Tron Crush) Dapp Review (Tron Crush) has only just launched, and the hype and FOMO around this dapp are huge. They already have over 1000 followers in their telegram group and over 1000 users already playing since day one. The good thing about this Tron dapp is they have a progressive jackpot which runs alongside the dice game for a chance to win massive amounts of Tron (TRX). While most of the other dapp’s don’t have this jackpot addition more and more are learning to add this as an additional way to drive traffic and attract loyal players.

Dice Game The aim of this game is to correctly guess each of the 3 dice within the main game, once all 3 dice are played the round ends. Players play each dice one by one, and the payout is sent straight after each dice is player based on the results and the odds. Tron Crush Players are also able to receive an extra bonus according to their lucky number combo. Then, a new round starts. 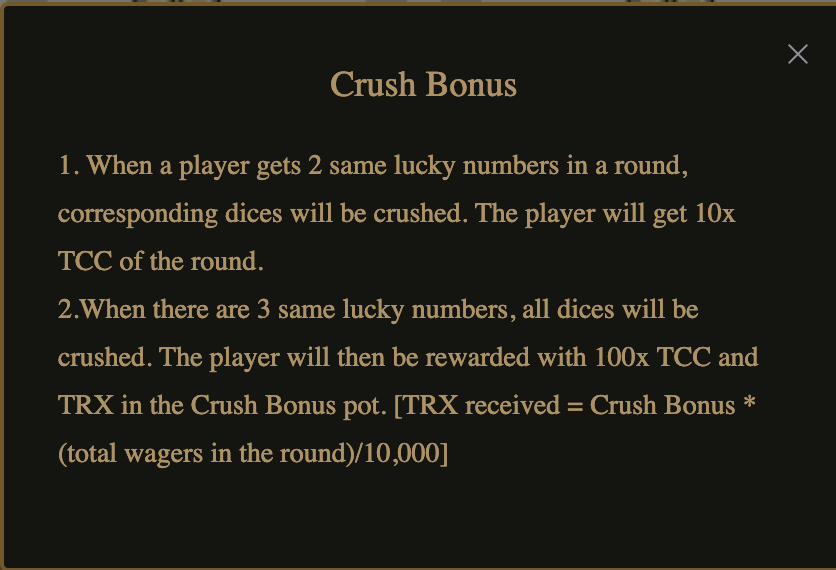 6% of the game revenue is put into the Crush Bonus pot. When a player gets 2 of the same lucky numbers in a betting round, these dices will be crushed. The player will then get a 10x multiple of TCC for that round. When all 3 of the lucky numbers are matched, all the dices are crushed. The player will then be rewarded with 100x of the TCC and TRX in Crush Bonus.

Most of Tron dapps don’t last more than a month or so because the novelty of the game wears off, e.g. FOMO (Fear of missing out) and the early advantage or mining at the first stages are gone. To resolve this issue, Tron Crush has created “Mega Jackpot” which gives players a chance to win massive amounts of cryptocurrency. 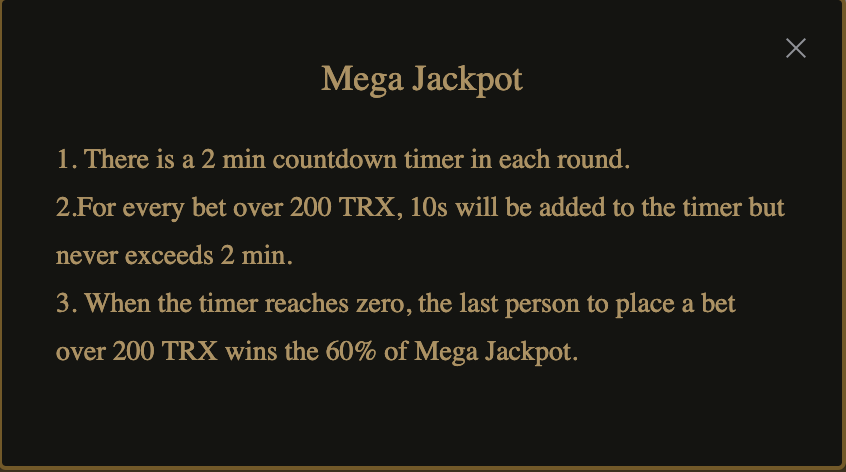 Tron Crush’s token TCC is generated through bet-mining. There are 90 million TCC tokens minable in Total. After 10 million TCC are mined this starts a new stage. Every stage passed will increase the difficulty; the rule of difficulty grows by 200 trx every stage with a total of 9 stages. Stage 1 is set at 600 TRX for every 1 TCC token this is cheap compared to some of the other dapps. TCC token holders will receive daily dividends from every game’s profits on the Tron Crush platform while tokens can be purchased through bet-mining, you will be able to trade these at a later date on various DEX’s.

TCC Token Information There is a total of 90 million DOO that will be generated and the distributed as follows: 65% Bet-mining, 6% Crush Bonus, 4% Mega Jackpot, 2% Ranking Reward and 23% operational. The devs also claim that the tokens dedicated to the operations, will be broken to be used as the following; 5% Tron Energy, 10% Bank Reserve and the remaining 8 will go to the developers. 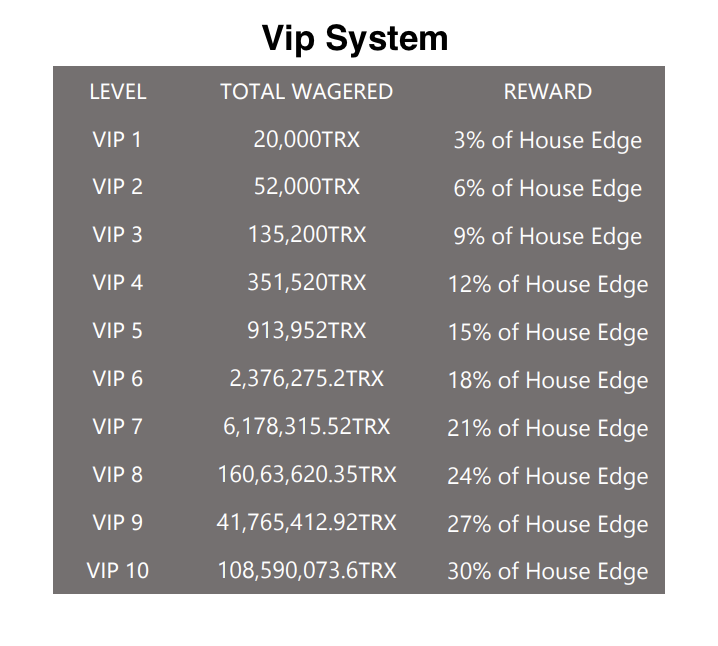 Referral Bonus You can invite your friends to play games on (Tron Crush), and you will earn an additional 0.1% of TCC generated by your friend’s bets. You can create a referral link once you have signed up to the site by clicking on the referral link in the header menu.