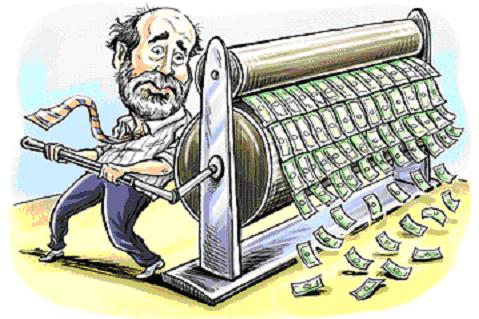 There seems to be a bill out there that will create, borrow, or tax a quick couple trillion dollars which will be spent on defeating the Corona problem.

If from taxes, that would be 5.7 million dollars from each man, woman, and baby in the country.

Well, sorry. I am a bit short today. Can I send you a check next week?

Conversely, if they print it, they could write a $5,700,000 check to each and every person in America. But that would be silly! Everyone being a multi-millionaire? That would not help avoid another 1,046 deaths nationwide.

Neither will anything they have slated for the same money. Don't worry though. It won't cause inflation or anything.

While reverse checking my math, I ran into this answer from my calculator. I know about x number to the x power. That is for counting things like atoms or even stars in the universe. I have never really had to use it, but now it is apparently used for counting dollars!

I thought I would need this sort of math for the local currency before using it for dollars. I have been living in a collapsing country for some time now. Here, they managed to turn $10 into $1000 (not what you think).

That means that you now have to pay $1000 for what used to cost $10 in local currency. That said, I have still not run into this strange 1.995×10¹⁵ response from my calculator. People in Venezuela run into this all the time when considering purchases of cars and homes. Paraguay is not far behind, having to pay $20,000 for a pepperoni!

This is common when governments print their paper into oblivion.

The first line in the below extrapolation

We have so far covered the nearly six million that each living human in America just spent to buy the Magic Anti-Virus including lots of crazy extras. 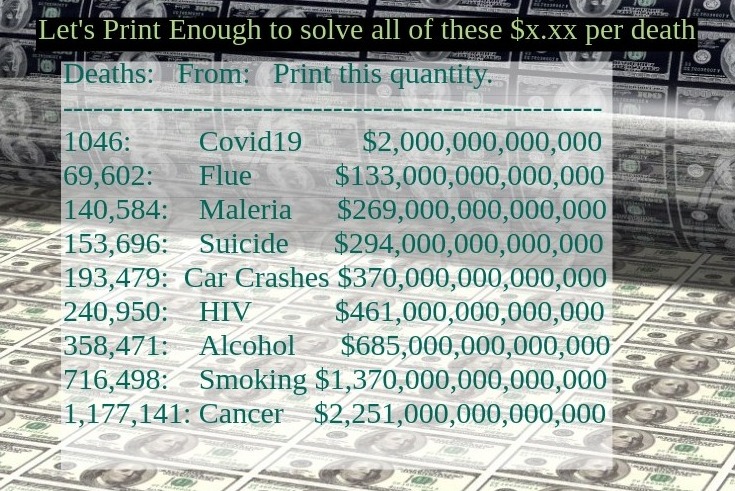 For a visual on what the government just spent - take a look at this representation. You will need to watch it twice to get the gist of our response in order to buy the Cornona Anti-Virus package. https://youtu.be/n4-4bvuX7qA

Next let's look at what they will have to print, borrow or tax, in all fairness, for the more serious problems our country is facing. If you put the same price tax (per death / per year) on each of the above, then I am afraid global warming is about to get much worse.

Paper mills have to have trees to print that much money. I have not worked out how many paper $100's each tree could produce nor the quantity of trees that exist in the U.S.A. I may make that my next post.