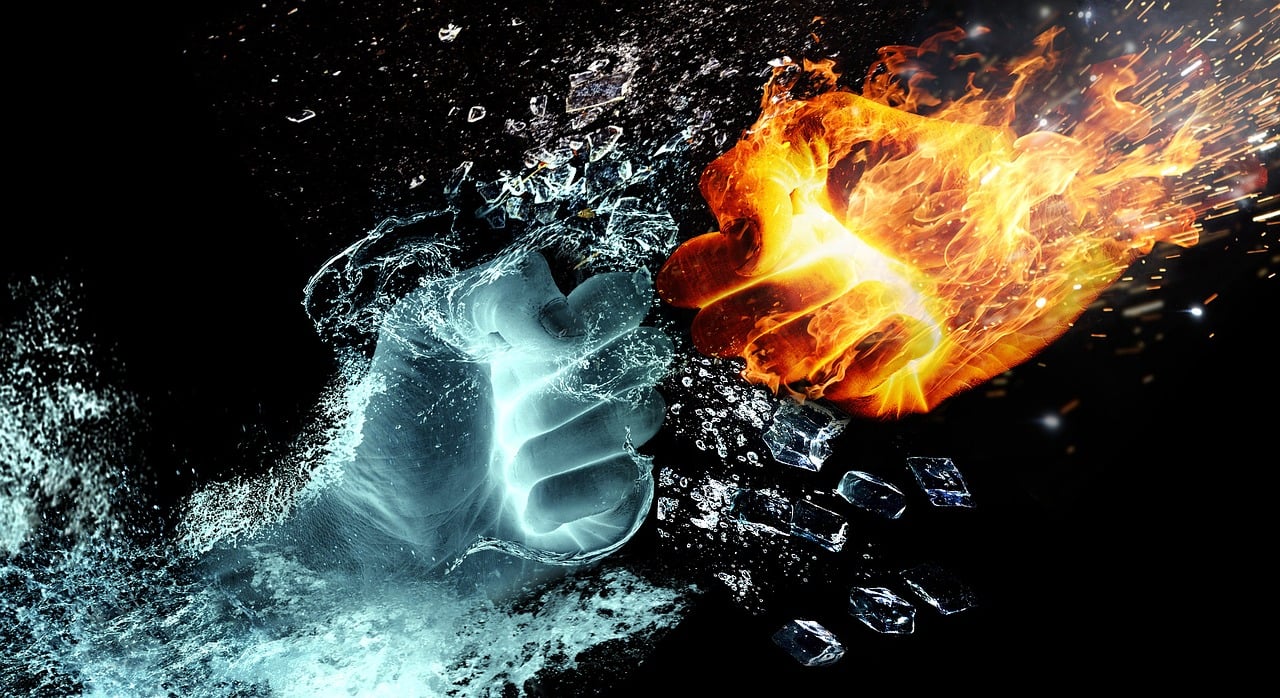 While we think "downvote" is a necessary mechanism in a Proof of Brain community, "daily free downvote" in long term could be a social problem that needs to reviewed and fixed.

Vote this proposal if you support "Remove Daily Free Downvote"

or you can vote the proposal directly with steemconnect:

Please read the reasoning in the post in order to make an informed decision and feel free to contribute to the discussion.

The Mission of "Free Downvote"

Most of the systems in the world have "bugs" or "vulnabilities", which can be exploited by speculators or attackers, and then the system itself gets hurt.

The proposal of "free downvote" in HF21, as one of the three measures in Steemit’s Economic Improvement Proposal (EIP) [1], is to fix several financial "vulnabilities" in the Steem system:

The problems that we believe should be solved are that of self-voting, passive delegation to bidbots (instead of participation in content discovery), spam (especially microspam), and abuse. These problems undermine one of the core unique value propositions of the platform; proof-of-brain. People generally gravitate towards what is the most profitable thing for them to do when there is monetary incentive.

The goal of these economic changes would be to move Steem closer to delivering on the promises stated in the whitepaper of unearthing high quality content by making it more profitable for people to actively curate, and less profitable to self-vote and delegate one’s Steem Power to bid bots.

In short, the major problems can be categorized into two:

The 1st category is mainly targeted at the whales, whose big amount of Steem Power could be misused for self-vote or delegating to bid bots. The 2nd category is easier to be violated by newbies, who often don't know yet the rules of the community.

Indeed, with the EIP deployed in HF21, we could see the bid bot like @tipu has effectively changed their strategy to support content curation, and self voters may give more attention to content curation than before. Also, self-vote to comments and posts also become less today.

Though self-vote and vote selling cannot be eliminated completely, we think the EIP worked well generally, and the "free downvote" has played an important role in the process.

The remaining question is whether the self-vote and vote selling will rise again if "free downvote" is cancelled?? I believe that in certain degree, these behaviors will rise again without "free downvote" as a threat, but will be much less than original after the economic model has been improved in HF21 EIP to motivate content curation.

For the issues of plagiarism and spam, so far we have no apparent evidence these behaviors are de-motiavted or not after the "free downvote".

AFAIK, we can still see these misbehaviors often around the community, and we should not ignore the fact that the number of new comers and active users are decreasing in the past months (according to the Steem Statistics – 2020.03.03). So we cannot give all the credit to "free downvote" only, even if the situation is getting better.

But It's Now the Time to Stop the "Wars"

While recoginizing the acheivements of the "free downvote" strategy, we should never overlook its downside.

Downvote always happens on Steem. There's no need to emphasize more about how frequent that happens on the platform and how many troubles it brings before HF21.

However, as predictable when the EIP was proposed, with the arrival of "free downvote", we're seeing more and more downvote abuse, retaliation and battles within and among communities. Quite some users will downvote because they don't want to WASTE their daily "free downvotes". These fights split the communities and enforce more users to leave Steem.

From the graph below, it's obvious the number of downvotes have increased hugely by 50% to 100% after HF21. You can see that the total downvote have DOUBLED: from 100K before Sep 2019 (before HF21) , to over 200K in Jan 2020. And please don't forget the number of active users have dropped by 25%~50% after Aug 2019 (HF21) in the same period of time, if you have looked at the visualization of active user count in the above section. This means the frequency of downvote have increased by 2~3 times on average to each active user after HF21. If you used to receive 1 downvote on average each day before HF21, now you're receiving 3 ~ 4 downvotes every day. This is a bit crazy and ridiculous. Isn't it? 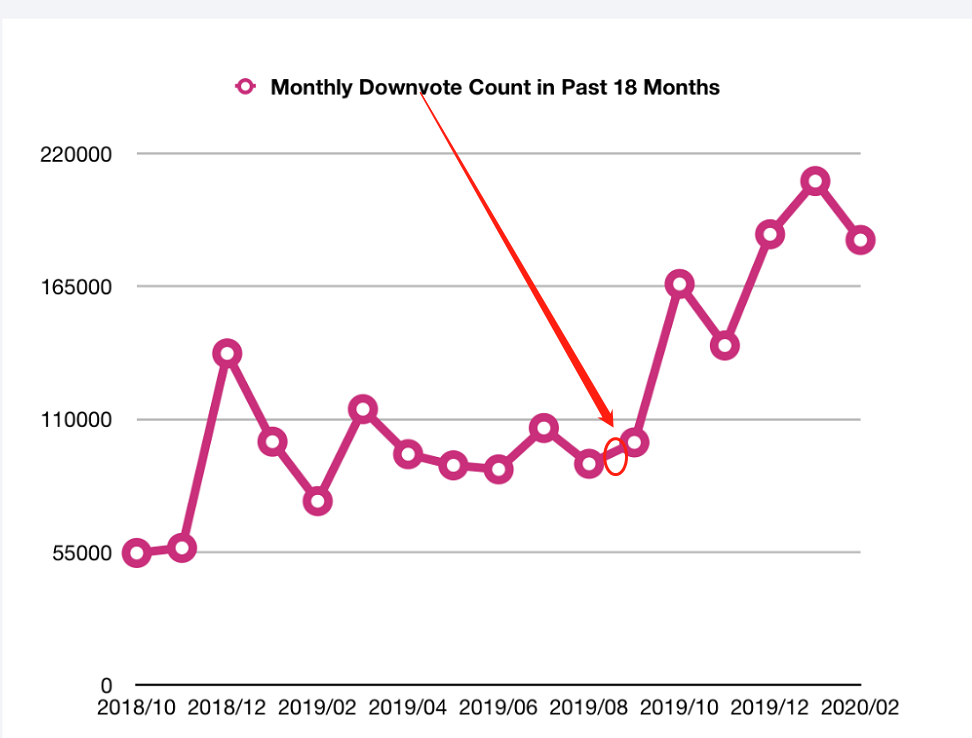 Then why did everyone got more downvotes on average??? Does it mean there're 2~3 times more self-vote, vote-selling, plagiarism or spam which need to be downvoted now, if we compare to the situation before HF21?

The answer is apparently NO. We already have less self-vote and vote selling as we observed. We didn't see much more new comers who may not know the rules. We didn't see more naive users who are increasing the misbehaviors of plagiarism or spam than what it is before HF21. So what are the guys downvoting for today?? Nothing else, but more battles and abuse, therefore more victims and more people who leave Steem.

We love collaboration and competition on Steem, but we never need "wars" in the community. Remove "free downvote" definitely reduce the occurence of fights. From a survey by @proxy.token, we see more witnesses want to remove "free downvote" / "downvote pool", than those who want to keep it. (Survey: Do you agree to remove downvote pool in Hardfork23 as a witness? -- by @proxy.token ==> Vote Result)

from dpoll Do you agree to remove downvote pool in Hardfork23 as a witness? Asked by proxy.token

The same request was proposed in @proxy.token 's recent post, and a lot of witnesses have got involved the discussion. [공지] @proxy.token 증인 투표 운영 방침(@proxy.token witness voting policy).

Eventually I don't believe remove "free downvote" will stop all the retaliation and battles, but the existence of such a tool definitely encourages more hate and fighting, and make more people leave STEEM.

When most people don't like a "vote selling market", they actually were not aware the existence of a hidden downvote market there, and we'll show you how it looks like.

For the 1st case, in the home page of the delegation and curation service @curangel https://curangel.com/, they stated clearly they are providing 3 times of downvote every 12 hours for their delegators.

As delegators "pay" (send) their delegation to @curangel, and they get some extra downvote rights as return, @curangel is a de facto downvote seller in this case.

For the 2nd case, SP leasers such as https://dlease.io/ are kind of hidden enabler for a downvote market. When they are leasing SP to their customers for voting, they are actually not only selling upvotes for curation, but also selling free downvotes with strong power.

The annual cost of leasing SP are around 12~13%. But after the curation reward ratio increases to 50% after HF21, it's possible now to acheive 15~18% annual revenue with the same amount of SP. This means, after lending a huge amount of SP from https://dlease.io/ , a hacker can not only earn some STEEM, but also downvote freely every day with the same among of SP. There will be a lot of victims in this case.

This is indeed a financial and social vulnability that can be exploited: with the help of SP delegation service, you can earn benefits and also downvote freely with huge amount of SP. And all of us should notice: Downvote Market is never better than Bid Bot.

The last but not least, hates and wars always make a worse and unfriendly environment for everyone, and scare away newbies, not to mention how a downvote war could impact the loyality of all the victims.

While you see a lot of fights and hates on Facebook or Twitter, it doesn't mean we should tolerate the same or an even worse atmosphere here in Steem.

You could learn from the below two surveys about how community members think about downvote. 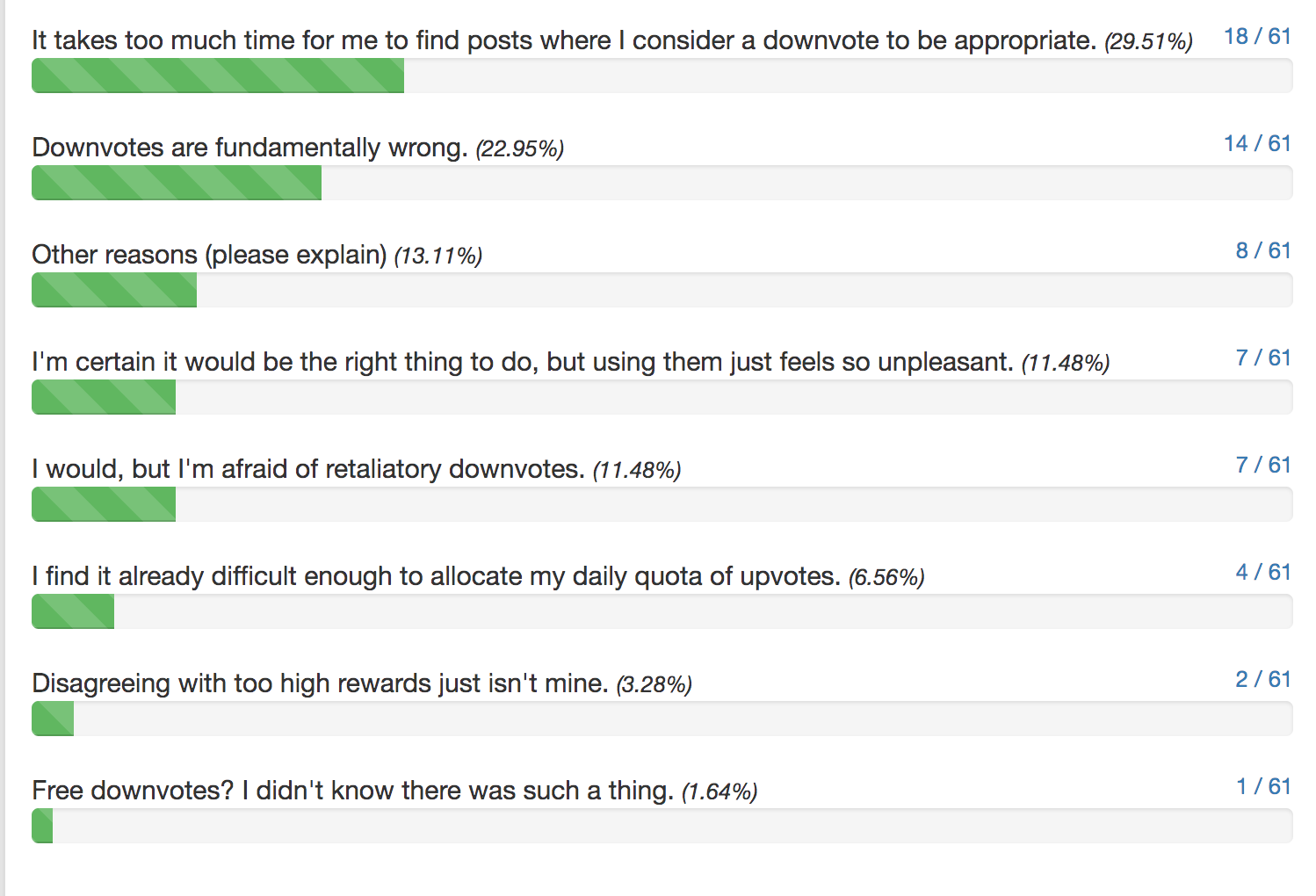 screenshot from Survey: What keeps you from using your daily free downvotes? -- by @shaka

Finally, everyone who support this change please kindly vote this proposal.

Proposal Recipient Disclaimer: The proposal recipient will be @steem.dao, funds will be returned to the SPS pool, the purpose of the proposal is to achieve voting consensus either IN FAVOUR or AGAINST the "daily free downvote".