The History of Music: The Invention of Notation

Last month I wrote about how there were some vague forms of written music many thousands of years ago, but these examples and relics were pretty useless when it came down to standardized details. Most punishingly, there was until comparatively recently no sense of rhythm and certainly no reference point.

To figure out how we solved this, we first need to explore why that even mattered in the first place. To do that, we need to skip ahead a few centuries.

A thousand years after Pythagoras' revelations, the Roman senator Boethius (477–524 AD) took the ideas from Greece to Western Europe which was then picked up by Pope Gregory (590- 604 AD) who was starting up some popular music schools.

At this time, there was already endless frustration about music's tendency to fade away forever, as the only way to store music until this point was with our puny brains, passing songs on through diligent students and word-of-mouth. The greatest song in the Universe could very well have already been written. We just... forgot how it went.

Thankfully, music was pretty basic in Medieval times, with God being the main emphasis rather than musical complexity. In fact, all of the known music at this point was entirely monophonic, or 'one sound'. Everybody in a choir would sing exactly the same thing. This is what we call Plainchant and I'm sure you're familiar with its sound:

This music is much easier to write down since it only requires a single, simple melody, and indeed this is where we start seeing the first form of music notation coming into place.

What you hear above is unfortunately only our best interpretation of what the intended song was to sound like because Neume notation, drafted by St Isidore (650AD) and appeared proper around the 9th century, was functionally useless by today's standards. In fact, Neume notation was mostly used as educational guidance; hints for a song that a student has already learned. It couldn't possibly serve as anything more, as neume music was still at this point little more than squiggles above the liturgical text: 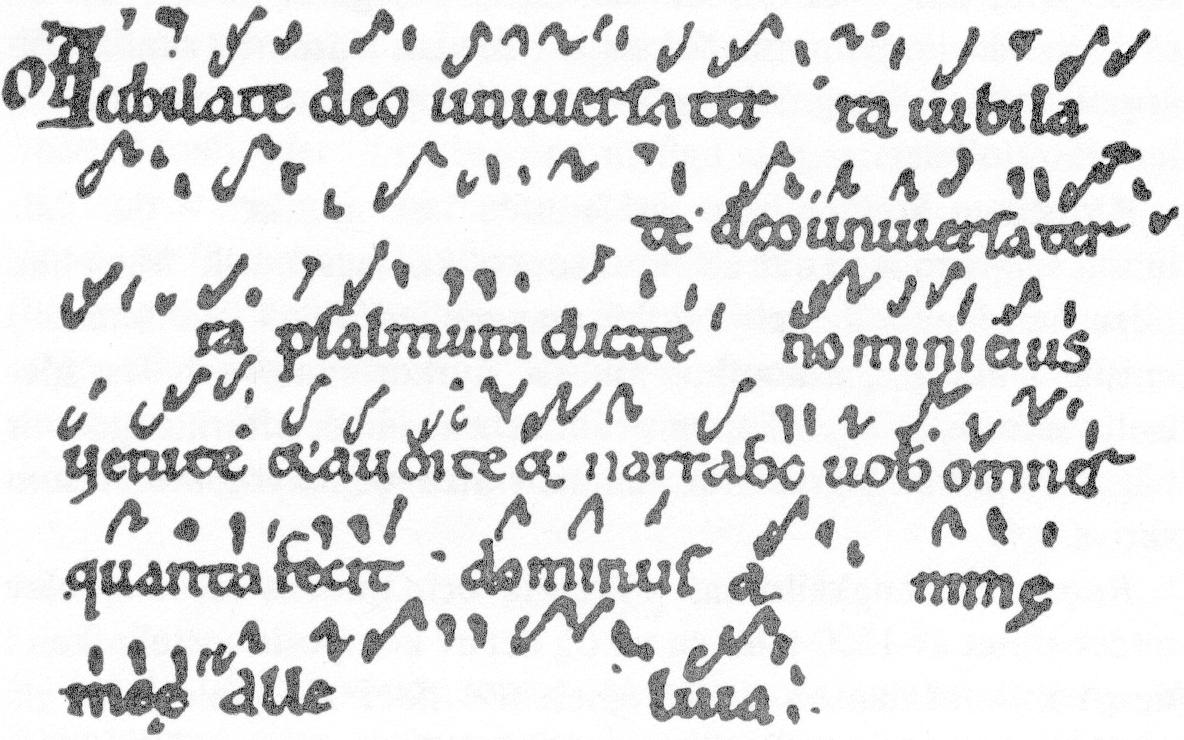 If you listened to the music above, you may have recognized it as 'Gregorian Chant'. However, in order to be a Gregorian chant, it has to be a piece of music specifically written down by Pope Gregory I who, according to legend, was approached by the holy spirit in the form of a dove who would sing beautiful melodies for him to have transcribed down by a literate servant.

For the eagle-eyed out there, you may notice a problem with this; Gregory died some centuries before written notation was even invented. So there is, to this day. a problem in the timelines of history. The only way his music could realistically have survived was to be memorized by hardworking students and passed on as accurately as possible until the day they were written down sometime after the 9th century.

Eventually, there were various improvements to Neume notation, such as around 1050AD, where we find some manuscript of Puer Natus Est demonstrating vertical relationships between notes, giving a clue as to how high and low one should sing - You may even be able to follow along intuitively if you listen and read: 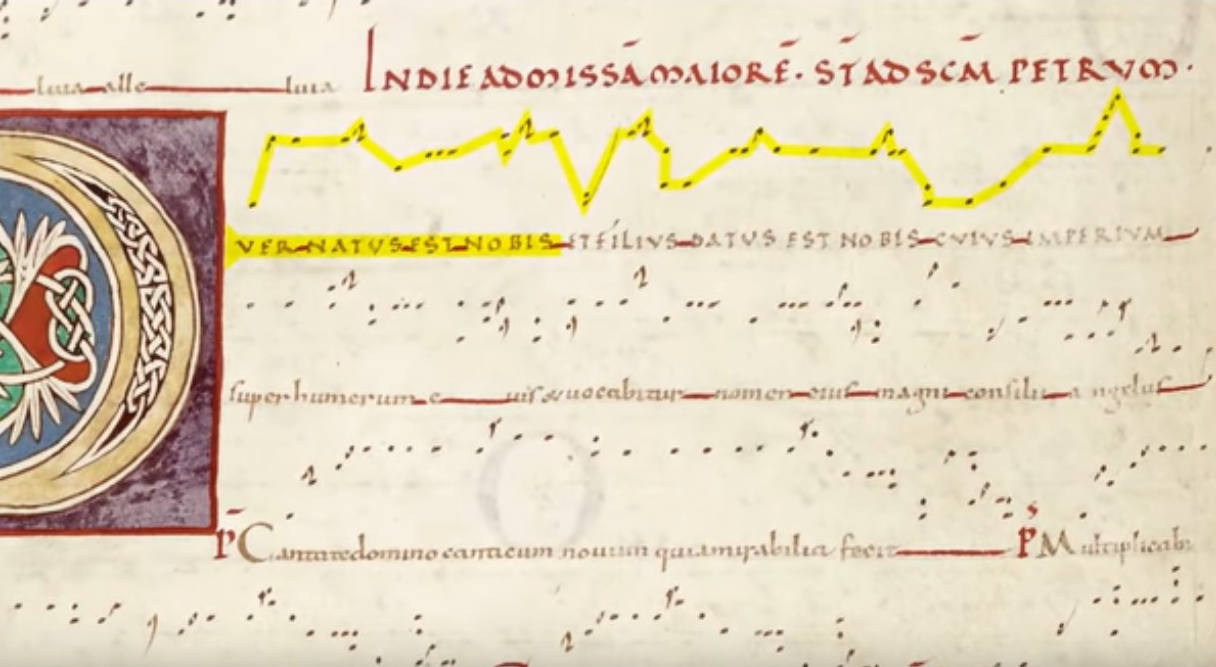 Even here though, we STILL didn't know where to actually start... This may seem trivial at first - as long as everyone in the choir agrees on a starting point on any given session, they can all just sing in reference to that. But music doesn't quite work like that.

This missing detail was a problem in particular because music consists of tones and semitones. If we don't know where to start, how do we know which interval to jump? Take a look at the keyboard below as an example. Bear in mind, music would only be following the natural 'pure' intervals laid out by Pythagoras. No G-sharps or B-flats. This means, Only white notes on the piano would be sung.

As you can see in red, there are two steps you need to make to get from one white key to the next, with a semitone - or black key - in between. This forms a tone. In both the yellow and green parts, there are no black notes in between, thus the distance is only a single semitone. Without knowing this due to the incomplete invention of Neume music, you had no way of knowing which notes are hitting the green and yellow semitone intervals and the red tone intervals.

It wasn't until a certain monk came along, exceptionally frustrated with these literary limitations to such an extent that he eventually took the reigns and patched up these gaping wounds of music.

By this point, 1,000AD, we're 1,500 years past the revelations of Pythagoras. For perspective, the Agricultural Revolution which set the stage for the Industrial Revolution and lead to where we are today, all happened in the last 250 years or so. If Guido was here today, the details laid out by Pythagoras occurred when the Persian and the Eastern Roman Empires were at war, and close to nothing developed in between.

Guido was born roughly 992AD and among many things, he invented the concept of the clef. Looking at the piano above, the green and yellow parts are E-F and B-C respectively. since these were the two important parts of the scale messing everything up, Guido pinned two clefs here - the F and the C clef, which indicated on a series of four horizontal lines where those two semitones were - everything was a tone except the notes BELOW these two clefs. Fantastic! Now we have reference points at least for intervals of the music!

It was now possible to read music! Of course, Guido's clefs looked very little like those above and more like old fashioned telephones:

Guido d'Arezzo accomplished much more than this, including the Guidonian Hand used as a method of learning music substantially faster than before, which also came alongside his creation of Solfege (do-re-mi-fa-so etc). However, this may be left for another post more focussed as a biography to him,

Most importantly, music could now be performed the same at one church compared to another in an entirely different country!

Neume notation was slowly evolving, and by the 13th century, we start to see a significant change. Neumes - the squiggly lines above text - were no longer squiggly lines, but instead blocks, squares, sometimes connected with one another to indicate directional runs and other things: 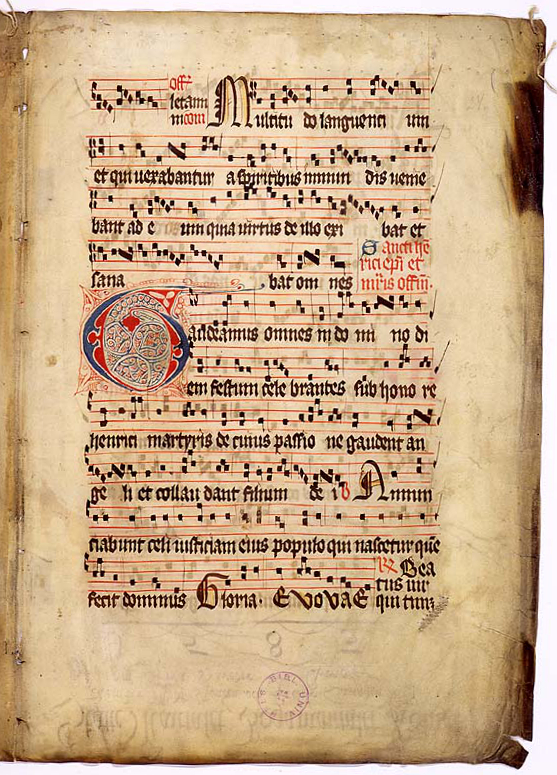 Once again, you can actually follow this music above - Introit Gaudeamus Omnes - in the following excerpt, starting from the right of that gigantic circular G. Just bear in mind that when notes are directly above another note, this does not indicate two different notes, but the lower note played before the higher one. Give it a go! Just follow the squares, with the words in your peripheral vision:

Assuming anyone tried, congratulations! You're learning to read music!

So we solved the problem of reference points, but we still have no indication of rhythm. This was typically fine as things were, and really quite free and liberating. However, as polyphony - or 'many sounds' started to evolve, it became harder and harder to keep things in control, with multiple melodies getting mixed up and out of sync constantly.

So how did we come to solve that?

Well, I'll save that for the next episode!