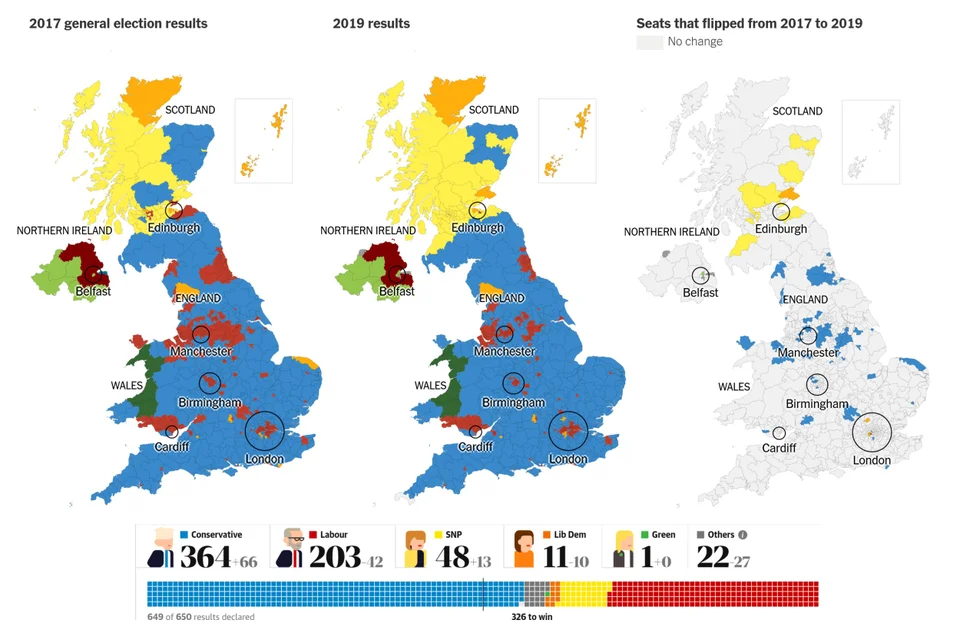 It's been a pretty turbulent and yet somehow also boring 3-4 years of Brexit in the U.K. I haven't been there the entire time, but I do find myself attached to it and perpetually informed because, well, It's where I was born and raised and where I will eventually return.

When Brexit was first declared, I was strongly in favor of remaining, and although I'm not eligible to vote for having been away too long, I wanted desperately to spread awareness of my views in hope that I could perhaps persuade people to be on my side. I lost, and Brexit happened, which I respected, which seems to be a rare phenomenon in this recent democracy.

Elections were called to keep Theresa May in power for another 5 years, and I was adamantly against the Conservative party, as I had casually been throughout life, purely for ideological reasons before I was truly politically engaged. Labour - the left-wing party - had been reborn as New Labour, lead by a kind of Bernie Sanders-esque figure with similar socialist ideals.

I was all for this. When he released his manifesto, I read it and I loved every page of it. It made sense, it was rational, balanced and sensible. The Conservatives released theirs and it was universally accepted as awful.

3 years later, and I find myself leaning more towards the Conservatives than Labour, with two outcomes I wanted from this new election; A) NO Jeremy Corbyn under any circumstances B) A majority government.

The majority government could have been anyone for all I cared - even Labour. Just not under Corbyn's leadership.

The thing is, I couldn't find myself supporting anyone. Call it a bug in democracy or whatever, but I spent weeks digging into the root cause of which I maintain to date that it is the terrible, agenda-stricken media forcing soured views on everything and being practically the only source of 'truth' a casual or passionate reader can get a hold of.

So although I was naturally against the Conservatives - this never changed - and increasingly in despair of Labour, with no inkling of support for any other parties running behind them, I felt I could not entirely blame any of them. After all, it's practically in the job description of a politician to lie, like lawyers and estate agents.

It was, therefore, supposed to be the job of the impartial media to fact check and report the complexities and nuance of a politician's agenda in an honest yet digestible format so the people could make proper judgments. It has always failed at this I guess, but with the rise in Social media, the role of journalism was spread wide and thin, and it became the role of everyone on the planet to be their own followers' reporters.

Traditional media had to keep up somehow, and so I think their state is now worse than pre-social media, as can be reflected by the decline in trust as people become more selective to what they want to subscribe to, but also generally more savvy to the truth.

With all of the above in mind, after the Conservatives slit the throats of Labour and got their majority win, I wrote a Facebook post I thought I'd share here:

Boris, on the other hand, ran a campaign of positivity, of love for his country and was single-minded in this strategy with only the occasional quip about Corbyn's plan being unattainable or whatever.

The point here is not of honesty, but of attitude. As far as I've learned, both are complete liars, but one took the positive approach, one took the fear approach. I prefer the former and it seems the vast majority of the country agrees. Whoever takes ownership of Labour next should not blame corruption and lies and so forth; let us, the public, do that. The next leader should focus on moving forward and listen to the people. Speaking of which:

I can't really say how much Tory's listened, however, I do think Boris randomly threw these very Labour-esque policies into the limelight (NHS money, education money, housing etc). Again, this could be absolute lies throughout, but this is still evidence that the party listened to the wider narrative and adjusted at least to some degree.

All this data is public, I've checked. Nobody uses it. At least not correctly.

I genuinely think the state of politics is conceptually easy to fix. I'm not naive enough to believe any one of these things will happen, but I wrote it because I think it reflects a growing sentiment across the world. We're tired of all the BS, and even as we passionately defend our bigoted views via our racist leaders or communist parties or whatever hate-filled napkins you want to wipe your mouth with, we know deep down inside that there's more to the story.

It's just that the nuance is more complicated and frustrating to sift through than ever, and we as a society aren't ready for that. Eventually, I hope there will be a breaking point where protests amass for the most important cause there is. Not climate change or war or equal rights or human trafficking.

I will happily vote for any party that tells the truth, no matter what they are proposing for the country, whether its banning free speech or killing all the whites. If they can back it up with incontrovertible evidence and they don't mislead the people, I'll vote sure.

After I buy a whole lot of tanning spray.

The above Facebook post brought a small handful of extremely butthurt Labour supporters who were quick to call me Alt-right and even quicker to call the entire country bigoted retards. Naturally, only those who voted for the party suffering the biggest loss in generations were right.

But again, I don't really blame them for their blind support. they have been trained to build echo chambers of bias in favour of their views, to provide them with a cognitive safe space. The same applies to all sides of the political spectrum (I'm aware that metaphor doesn't work).

I can only blame the media for enabling this, and perpetuating views that represent a small minority as if it was the country's majority. Well, the people have spoken. Were the conservative voters who were victorious also brainwashed with ignorant views? Entirely possible.

This is why I would not have voted for anyone, given the opportunity. Voting is a right, yes, but we're not supposed to use that right badly.

Since any vote is by default a bad choice in the current political climate, it would seem more ethical to me not to vote, and save it for better days.

Those better days will come when the truth becomes a priority over emotion. I'm sure that day will come but... in my lifetime? I guess we will have to see.