Learning to Animate Music for Future Secret Plans or Something

I thought I'd make a post nobody will read in the current climate, about what I'm doing these days other than reading witnesses and stakeholders going around and around, as if circling a drain.

I'm starting on a certain personal project that hopefully will be a change in certain things I do here if all goes well. But to do that, I need some new skills. Only rudimentary; I'm going to leave the expert skills to people like @glass.wolf if I can afford his amazing services.

But in the meantime, while I get my thoughts organised, I can use the same skills for a second project I've been pondering for some time; music theory classes on video.

This has been particularly present in my mind lately because ever since work began after the vacation here in China, I've been working at home. This is now week 3... or 4? I've lost track of time, to be honest.

Since it's online I'm constantly trying to see how I can improve things, so how about a beautifully designed, pre-recorded series of music theory videos that anyone can watch? I am fully aware that elements outside of raw information help retain said information when teaching; humour has a great power to instill knowledge, as does aesthetics.

So with that in mind, I figured I'd... legally purchase Adobe Illustrator and Adobe After Effects and get some baseline idea of how to make 2D vector animations.

I started off with some free samples of vector graphics online of a nice little moon off-world somewhere and tried to move individual components around. This was a pain in the arse but eventually, I managed to make something excessively tacky and basic:

As you can see, the foreground kinda moves independently from the rest, as does the planet floating around at the top. And I slapped a little SteemSTEM rocket in there for good measure, fading, fading away.

But now it was time to get my own images. Well, I'm not an artist so I can't go that far for now, but what I can do is take screenshots of music notation, super zoomed up close, from the free, open-source music notation software Musescore.

Since it's open-source, I can use the notes freely... not that a case of copyright on a note is in any way ethical unless it's particularly stylized, but whatever. I cut around each and every variation of notes, rests, accidentals, clefs and such that I thought I might need to start off and pasted them into Illustrator. Then I had to learn how to turn them into 'vectors' and make the background disappear, rather than be 'white', so I could tell what is embedded into the image as white.

The next goal was the figure out how to remove said white background from each image, which, after a quick YouTubing, proved fairly simple: 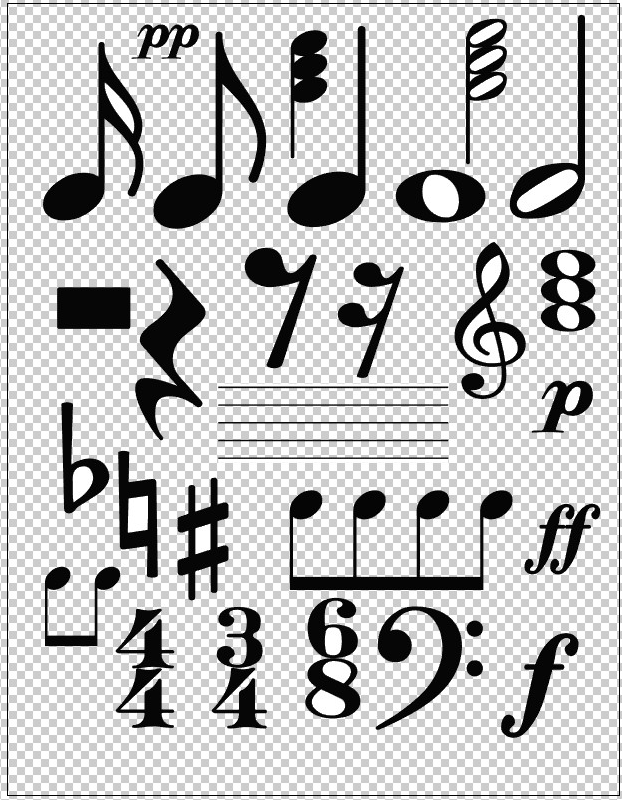 I couldn't figure out how to remove the inside white bits, it kept just going black, but whatever, good enough for practice.

It seems like there's no way to just do group actions, so I had to remove the white through a 3-step process for each fecking item here, and then I had to create a new layer for each one and migrate them to their own independent layers before I could export them to After Effects:

Cool. Open up in AE. Add a white layer background... or maybe something a bit more papery. After spending an unearthly amount of time figuring out how to draw a straight black line before finally giving up because drawing a line just isn't something that should be easily accessible in such programs of course, I decided to start setting up the animation. The goal was to make the music run across towards the Treble Clef before landing in its destination and vanishing or exploding or something. I noticed the quality of each image was immensely low. I'm not sure why, but I guess either the compression option I saw earlier, or the fact it's a preview or some other thing was going on... It's fine for now... whatever.

It took a lot of time to create something so shitty, but I genuinely feel like I had learned a lot, and by the time I had finished I felt my actions were becoming somewhat 'routine'. Next time I'll be able to do the same task in a few minutes, rather than hours.

Anyway, I had to export the file and, well, a mere 5 second, low-quality video was over 300MB, so I had to go to free Openshot video editor to re-render it into a smaller size.

Finally, I plonked that into onlineconverter.com to transform it into its final stage from a 300MB .AVI piece of junk to a 300KB .GIF piece of junk.

Not bad for an evening's work, I guess!

It was then I realised my hard drive had gone from having 60GB spare to about 30 over 24 hours, which is confusing and annoying.

But more importantly, I still need to work out how to maintain high-quality images and how to draw god damn lines. Oh, and remove those white bits.

Note to Self: Add actual music.