China dares you to match its reforestation efforts! (Part 2)

In my previous post, I gave a little perspective to the substantial conservationist movement, #teamstrees. A combination of popular YouTube channels came together to ask the world for $20,000,000 by 2020 to plant 20,000,000 trees by 2022.

This is a phenomenal task that requires much more than throwing seeds in the ground, as I explained, and the effort is nothing short of admirable, but it is also completely dwarfed by the efforts of China and India that has been doing such things since the 1970's. Just a single initiative in China has planted over 66 billion trees since 1978, for example. India planted 50 million trees in a single day.

My post explained how the consequences of badly run projects like this can make matters so much worse, from drought and loss of groundwater causing entire cities to become abandoned, to an extreme lack of biodiversity and just a general waste of at least 25% of the trees to begin with.

However, using China as an example, they eventually managed to figure out a working formula. How? What is China doing now that the Western world could learn from?

What a difference a tree makes

Based on satellite data between 2000–2017, NASA noticed, counterintuitively to most of us, that the earth is getting greener. One's first explanation for this is that Climate Change is causing more CO2 release, which serves as a lot more food for trees, and the heating up and melting of the permafrost across the northern arctic regions gives more opportunity for trees to start growing again in massive swathes continent-wide.

However, this is not what we see. The data showed that the change in greening was very clearly concentrated in two areas of the world you wouldn't expect: India and China

Together, the two countries account for a third of planetary greening, 42% of China's as a result of such conservation projects. Improved crop practices also play a large role in this in both countries. Overall, China saw about 11-12% increase in leaf coverage each decade. That's incredible.

But now there is a new movement, TeamTrees that is a noble effort to contribute to this cause. After all, the planet belongs to all of us, not just China and India.

The difference between these two movements is that one was highly publicized and calls on the average Joe Bloggs to make a difference. You, me, anyone can contribute a single $1 and have our own tree, or $100 for our own little forested area.

This can have a powerful social effect that can encourage the world to follow suit. Who reading this knew about the greening of China or their struggle with the invasion of the Gobi Desert in my previous post?

What is China's answer to the sociological effect of viral YouTube projects? Now, there is a new development from one of China's biggest corporations, Ant Financial. This $150 billion corporation has a stranglehold on the people of China, which is terrible for people wishing to be anonymous, but incredible for those who wish for a convenient life.

In Ant Financial's app, Alipay, you can essentially do everything, from ordering food from anywhere in the city to booking flights, movies and hotels, give to charity, pay your bills, order taxis, healthcare, loans, and insurance, and yes, even save the trees.

Ant Forest is a fairly simple game within the app you and your friends can interact on, which is connected to your daily life in ways you can't possibly imagine. The mini-game is so powerful in fact that the UN awarded it the '2019 Champions of the Earth award, the UN’s highest environmental honour'.

Essentially, you collect little bubbles of carbon. When you pop the bubbles, the carbon goes into a little sapling, growing your own virtual tree. The tree gets bigger and bigger until finally it becomes fully grown. Once this is accomplished, Ant Financial will plant one real tree, made by you.

I've been using this app for a while and have accumulated a little over 40kg of carbon, enough for one tree to be planted. But I never truly understood how this was possibly connected to reality, and how Ant Financial could possibly make money from this. It's also pretty hard to understand why 500 million citizens of China are regularly using an app where you just sit there bursting 3 or 4 bubbles once a day. Steem can't even retain 3% of its user base and this blockchain literally pays you to post selfies. What gives?

Well, the answer lies in where that carbon comes from and is made possible by the aforementioned stranglehold Ant Financial has on the people of China. 870 million people use Alipay for its mobile payment services, and everything we do is, of course, tracked and recorded.

The goal here is to reduce our carbon footprint. You can use the app to, for example, unlock public, shared bikes as an alternative to taxis, buses and subway systems. By using these bikes (of which there are about 300 million daily users), you get rewarded with some amount of carbon grams for your tree. Using other electronic services instead of the paper alternatives also rewards you, and there are a whole number of other functions you are encouraged to take advantage of in order to live a greener lifestyle.

You might get 2 grams, for one thing, 60 grams for another, it depends, and you can steal from friends if they are too slow to collect their own bubbles, but you can also help them out if they forget to pop them before the time runs out, creating a kind of community effort. You can also build a tree together by pooling your carbon resources together.

If you want to make bigger trees, you have that choice, too, and there are certain levels of tree you can save up for, requiring over 200,000grams for a cottonwood or scots pine tree. You even get to choose where on the map you want your tree planted, and get to enjoy Satellite footage of your tree!

For the most part, people are going to choose the easiest - and most important - tree; the saxaul. This plant, scientifically known as Haloxylon ammodendron, is vital for the fight against the Gobi. It is particularly drought-resistant and able to grow in densely saline soil, but it's also an over-exploited plant, threatened with endangerment, so growing more in its native, arid land is pretty useful for conservation as well as building a natural wall of defense against the encroaching Gobi. 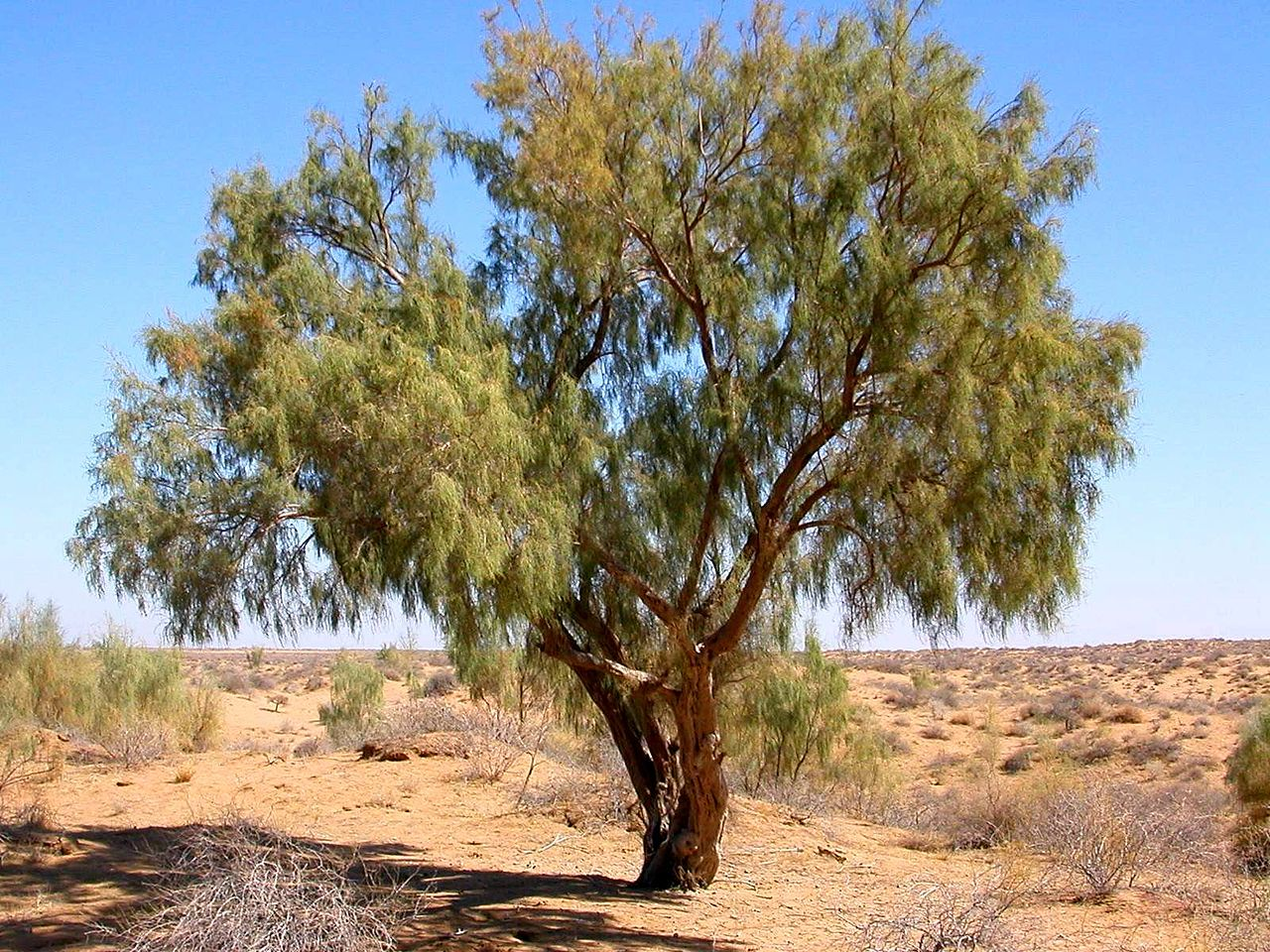 Jabez - Free to use

However, that is not the only place. A cottonwood is hardly going to grow in the same place as a Saxaul! According to this paper on Research for Sustainable development, Ant forest has a number of leagues, or planting locations:

I may make a third part of this series looking into the specifics of the trees and choices made in these climates, I guess we'll see.

Either way, as you can see, this system has numerous benefits and its gamification with people's finances and active lifestyles is a revolutionary way to take advantage of the digitalization of our lives and economies. So far, Ant Forest has resulted in 100 million trees being planted in the last 3 years. One of which will soon be mine! (I'm saving for a larger species). Even more ambitiously but just as feasibly, they plan to reach 500 million trees planted in the next 5 years!

Show me the money

But there is one more missing piece of the puzzle. How is this sustainable? Where is all the money coming from to hire the workers to plant and care for the trees? How can a company profit from this at all?

It was pretty difficult to find the answer to this, with all news sources simply describing its function, and not its economics, but I finally came across a single study into their business model and it's quite varied and genius!

There is a multiple-step approach, starting with a number of welfare foundations providing financial support corresponding to the carbon reduction data per user, without which the whole project could not survive. However, the fact that there are businesses running on the app such as the shared bikes, cinema bookings, utility companies and so on, well, they want exposure. Ant Forest encourages users to take advantage of these businesses, and so these businesses support Ant Financial to continue their place on this app with an almost 1 billion user audience.

On top of this, there is a government initiative used around the world called carbon trading. Essentially, governments put a cap on the amount of pollution a company can emit, and if they want to produce more, they have to pay for an extra permission slip to do so. If one is below the limit, one can sell its partition to other companies.

Each users' account has its carbon emission reduction recorded on the Alipay app. Each Saxaul amounts to 17.9kg of carbon capture. If each of the 100 million trees were the smallest option, the saxaul (and I'm sure many are the larger species), that amounts to 1,973,137 tons of carbon capture that Ant Financial can now sell off to other companies. Each ton can get you about $7, which doesn't sound like much until you do the maths - almost $14,000,000 in total so far.

For a $150 billion company, this still sounds like pittance and indeed, the project is to date barely profitable, but they have another trick up their sleeve: Future development.

These forests are getting BIG, and with big forests that hundreds of millions of people are not only aware of but consciously contributing towards, well, you have a lot of potential tourists. Tourism is the next step along with new pastures of agricultural products, such as various medicinal plants, licorice trees and more that come with the project.

This whole movement is one of the best things I've seen any company figure out and not only be charitable to the world and create a nationwide community effort, but make money from it.

Being profitable means the project also has room to grow, which it is. There are now little side games such as playing volleyball with a giant baby chicken which, as far as I can tell, earns you points you can then donate to your chosen charity or person-in-need (I'll have to look more into that), and the whole thing is already looking to go international.

So what can the world learn from both China's Ant Forest and the west's Teamtrees? Team up, pool your communities together. Make it fun, make it profitable, and make sure we are genuinely a part of the process!