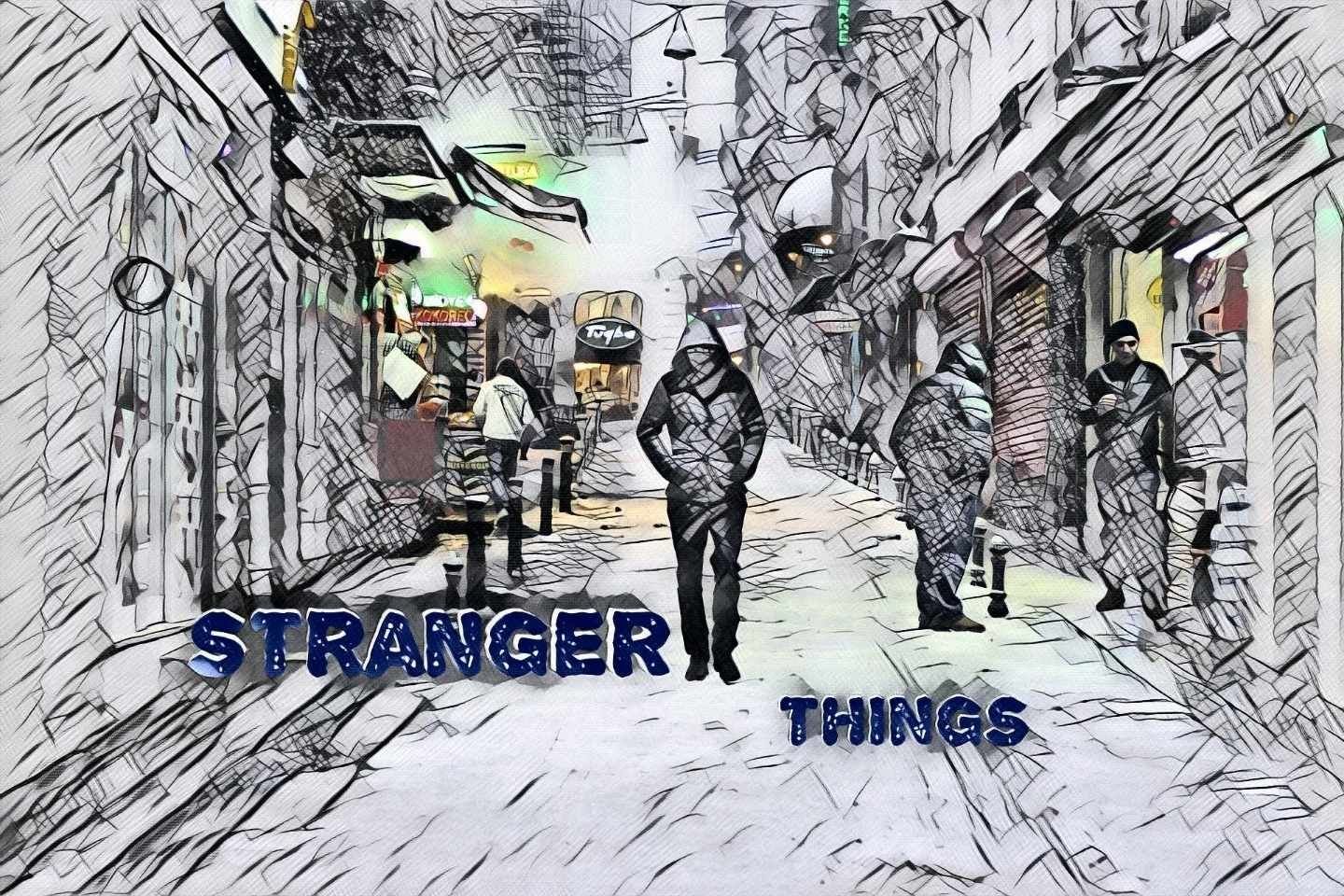 Surprisingly, in the past, I have written for other publications on this fine platform. Now that everything is stuffed and up in the air I have decided to reclaim my work and post it on my own blog.

Note the lack of swearing. It's hilarious being tied to rules...

Forgive the misleading header. This post is not to talk about the latest Netflix sensation where some photogenic young teens save the fictional town of Hawkins from an encroaching supernatural menace hailing from an alternate dimension. (Enough of my toilet habits.)

No, instead I would like to discuss our attitude to strangers. As in, people we have not yet met and not long-limbed monsters from the upside-down.

Today, I was returning from my lunch break when I was stopped by a wild-eyed fellow on the street clutching some manner of map.

My first thought was that he was out of luck if he was looking for Black Beard's hidden treasure as it was most surely not buried in the City Centre of Glasgow, Scotland.

My second thought was to be on high alert. Scotland is known for many things, one of which the Scottish tourist board always tries to play down is the savage predatory nature of the urban Scots upon their fellow man.

I bounced around on my toes, readying myself for things to get a bit leery.

The chap gestured at me with his map and pleaded,

Excuse me, would you happen to know where this building is located?

Despite the fact that he had an accent as civilized as my own and was wearing a suit so sharp it was in danger of slicing a hole into another dimension, I was not so readily fooled.

I beg your pardon?

Was my wicked riposte whilst I watched his hands for weapons or movements that suggested an innate knowledge of Krav Maga.

This building old fellow, I can't seem to place it. I have an urgent appointment at two o'clock.

He seemed genuine enough but this wasn't my first invite to a sexy party. I leant in a little so I could see the map more clearly but far enough back that a swung sock full of coins couldn't catch me on the chin.

Ah yes. I know that one. It's down the bottom of the street there and to the right... Oops, sorry, I mean left.

I waved a brawny arm in the general direction of the place in an ape-like display of masculinity. Just to emphasise I was not to be trifled with.

You mean the left then don't you?

Oho! Well, well, well my little pirate treasure hunter. If you bloody well know where it is then why are you asking? I stepped back, readying myself to unleash a bag of testosterone-fueled punchy-kicky-fight mayhem.

He stared at me. Eyes wide.

I stared back like a fox would at a casually discarded kebab.

He muttered before skirting around me nervously.

I watched him go. My eyes like demented gerbils.

Soon he was out of sight. I continued my walk back to the office. On the way, I had time to reflect.

Should I be more trusting of strangers? Should I have been nicer, perhaps invited him to tea? Maybe I should have shared a joke about the time I got lost in Venezuela and ended up trapped in a bin for many hours?

Whilst I thought of these questions, I was reminded of one of my colleagues who always had time for strangers and general deeds of goodness.

Right enough he has been robbed more times than I can count.

What is your attitude to approaches from strangers? Do you think we should all attempt to be more friendly and make the world a better place? Or is the Scottish way of open hostility the only sensible response in this age of modernity?