The One Trading Card Game To Rule Them All (Steemit Airdrop!)

In 2019, crypto trading games are all the rage, and dozens of hugely popular new titles have been launched this year, bringing with them thousands of collectible non-fungible tokens (NFTs).

However, while dozens of crypto collectible games have come and gone, few are still as relevant today as they were when they first launched. Part of the reason behind this arguably due to the lack of scope, which eventually leads to a lack of variety, stalled development, and player disinterest.

All of this is about to change with the advent of Tides of Magic, a brand new trading card game built on the Ethereum blockchain that promises a boundless, ever-growing world comprised of your favorite crypto collectibles.

| Tides of Magic are also airdropping 3 standard packs exclusively to Steemians, read below to find out more!

To practically eliminate the possibility of stagnating, Tides of Magic is unique among Ethereum games, in that it supports crypto collectible tokens from potentially any other game—making it essentially infinitely expansible.

“We want to join all of the crypto assets into our own game, or help others do it.”

Despite launching just days ago, Tides of Magic has already formed agreements with several major crypto collectible games to bring their in-game assets to Tides of Magic, these include;

So far, the team has confirmed that every single ether monster from Ethermon will be available to use in Tides of Magic. Not only this, but Tides of Magic will also be compatible with every asset from the wildly successful ‘My Crypto Heroes’ and is in talks with several other popular Ethereum games,

When a crypto asset is brought in from another game, Tides of Magic will decide which category it fits into, e.g. whether it is a minion, spell or habitat card, and will also decide its in-game stats. How will your external crypto assets play into your Tides of Magic strategy? Only time will tell.

For anybody who has played other popular Ethereum card games, Tides of Magic will likely feel immediately familiar. The team has done an excellent job of making the game accessible to players of any experience level, having produced a simple to play game which can be grasped in just minutes.

In brief, these are the basic elements of the game:

The number shown in the top left corner denotes the casting cost for each spell. The first mana used to cast the spell must be of the same type, whereas all subsequent mana can be of any type. 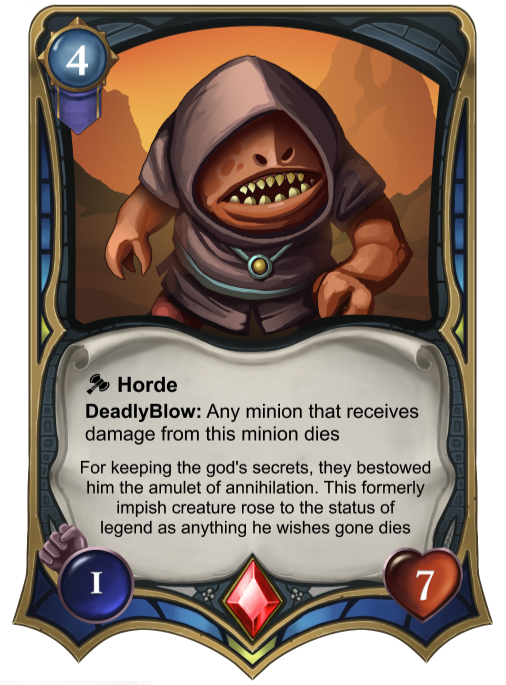 Beyond this, there are 11 default factions. Each faction has a variety of minions, each with a unique combination of attack power, health, and unique abilities. Which faction/s will you align with?

These spell cards and minion cards can be combined with rare habitat cards, which are used to generate the mana needed to play spell cards. Each player can assign up to three habitat cards for each game, these are placed directly on the field, rather than forming part of the 40-50 card game deck.

Not all cards are built equal. Cards can be common, uncommon, rare or legendary. This is indicated by the color of the gem shown on the bottom of each card, though you will likely be more interested in the purple (rare) and red (legendary) cards. In general, rarer cards are more desirable in-game, but this isn’t always the case.

In total, Tides of Magic already has over 1,500 different cards available, including more than 850 minion cards, 700 spells, and a dozen habitats. The list of currently available Tides of Magic cards can be found on the game’s OpenSea marketplace, where they can be sorted by type, rarity, health, faction and more, allowing players to buy and build the perfect deck.

Standard packs, such as the ‘Red Magic Pack’ can be purchased for as little as 0.04964 ETH, whereas the most expensive pack—the ‘Legend Magic Pack’, currently costs 0.272 ETH. With each successive pack order, the price of subsequent packs will rise by 0.00033 ETH each for everybody. This additional pack premium can be avoided by purchasing several packs at once.

Tides of Magic is now live! To find out more, check out these links: