Dennis Quaid must need some money or perhaps Hollywood is no longer interested in giving him roles that actually matter. When reading the description of this film it is very evident that there have already been a ton of films that are just like this so honestly viewers probably go into it not expecting much. However, I like many others (the film made a pretty decent return) was duped into watching it anyway because of Quaid's presence. I have lost a lot of respect for the man because of this role.

Normally I try to avoid spoilers but on films that I really think are a deplorable I abandon that courtesy - so if you enjoy wasting 90 minutes on garbage, go ahead The story goes like this: A young(er) couple buys a house from a widower who has lived on the property all of his life. He seems normal at first, perhaps even helpful, but as time passes by the couple starts to realize that he wont go away and is actually monitoring the property, going to the point of attempting to reprimand them for changes they are making to what is now, their own house. Eventually "Charlie" (Quaid) starts stalking them.

Now I realize that this isn't exactly like films in the past but it certainly has a lot in common with various plots that have existed on numerous occasions such as Cape Fear, Fear, Panic Room, and Straw Dogs but all of those were infinitely better films than this because those were at least plausible.

The impossible nature of this pile of turds comes at the hands of the new homeowners never having a phone on hand when trouble begins (think about how often you, personally, don't have a phone on hand; now multiply that times 2 or 3 people.) At the start it is a bit endearing the way that they try to accommodate this older man by allowing him some access to his old house but as he becomes more and more intrusive, certainly the police would have been involved and they never are. Later on in the film when they do report "Charlie" they are unable to file a restraining order on him because they don't know his current address. 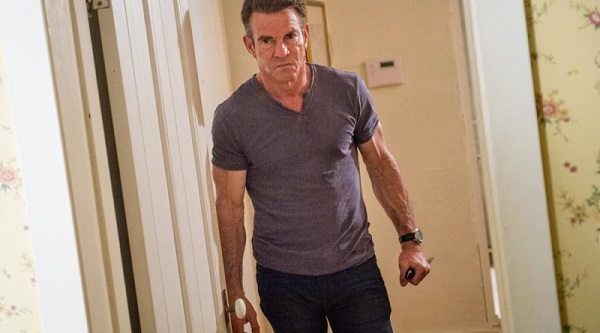 The couple seem perplexed at how it is that Charlie seems to come and go inside the property as he pleases because "we already changed all the locks!" only to discover a false wall hiding a massive underground lair and I think this part of the film pissed me off the most.

The false wall is contained behind a cabinet that is built into the wall and the doors and drawers on said cabinet were also fake meaning that there would be no way to store anything in the cabinet. Do you honestly expect the audience to believe that they never checked this cabinet that is in the hallway? The other entrance the "Charlie's lair" was a completely not-hidden-at-all ladder descending from their garage - I guess they never went in there either.

Charlie kills one of their friends who was on the property and the guy's car was still there for days and presumably there was blood on the car or around it. Yet no police investigation happens of any sort and everyone is just like "well it is awful strange that Mark would just leave his car here and never go home or to work again." Charlie also transitions from polite,overly concerned older man, to crazed killer, instantly. There is no character development or indication as to what his motivation is, he is just all of a sudden really mad and wants to kill everyone. The above picture is from a scene that was at least funny due to the obvious Shining reference.

https://www.youtube.com/watch?v=aKXvex7b1Ew from the official Sony Pictures channel check the 2 minute mark for a look at the absurd hiding place for the "secret entrance to Charlie's underground lair."

Overall this movie should only be watched in order to see how predictable and exceptionally dumb the movie is and perhaps feel a little bit bad for Dennis Quaid - who up until now was someone I thought had some sort of standards as far as what kind of movies he will be in. I'm not familiar with anyone else in the cast and presume they are in a position of "hooray! we get to be in a movie with Dennis Quaid!" so you can't really blame them for this turd.

The only thing admirable about this movie is the fact that Quaid is in exceptional shape for a 65-year old man. The script, the impossible nature of pretty much everything that happens, the near complete reliance on "jump scares" to have anything happen, and the total lack of character development make The Intruder one of the worst films I have seen in 2019.