So I finally won a race

I enter these off-road jungle races a couple of times a week for exercise and the camaraderie with the other expat residents that live in the Chiang Mai area. I don't ever expect to place very well in them. This was especially true earlier this week when I went to the Monday run drunk after drinking beer all morning during the Super Bowl. I was a bit useless on that one.

Now for any accomplished runners out there, a 7 minute km is NOT an impressive run rate but there are 2 things you gotta understand about these things.

at this portion we were on a tiny raised platform between the rice fields, obviously you can't move very fast on this

So there was a pack of about 50 people and I was NOT in the front the entire time because there are certain points where the trail ends and then whoever the people are up front have to search for where the trail continues, which is going to be somewhere within 100 meters of where the marker indicated that the trail had ended. You have to FIND it and then shout to the others.

This can result in you losing a couple hundred meters of your progress because if you accidentally go off in the wrong direction, now you have to catch back up. So a lot of my victory was based on me being lucky and that is ok with me if anyone wants to say that it was "the only reason why i won." 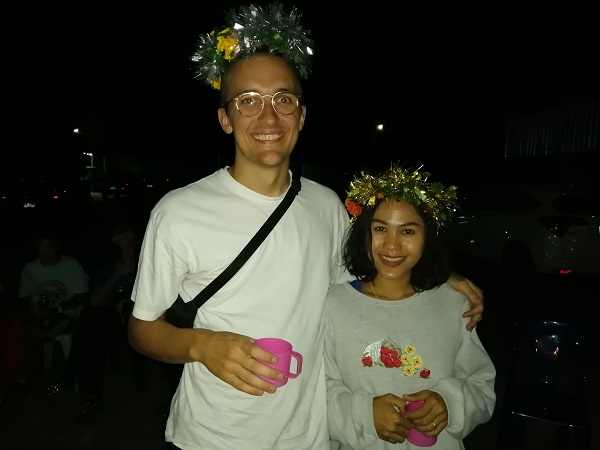 You don't actually win anything for coming in first. Well, other than pride and the ability to hand out this crown that we refer to as the "wings."

I have been running with these guys for over a year and only came close to winning once before. This time, i finished multiple minutes before anyone else so yeah, I'm gonna enjoy this moment. A few years ago I was 106kg and couldn't run to the end of my driveway and back without needing a break (and probably a sandwich.) I am now down to around 82kg and winning races? Yeah, I'm proud of that and I'm gonna brag a little bit :)

This was once again done with the Hash House Harriers. A international group of "drinkers with a running problem" that I highly suggest you check and see if your region has a chapter.