Into the Woods (film) : interesting at parts, but mostly very skippable

I am a bit biased in the realm of film musicals as I tend to not enjoy them. It really doesn't matter to me how good the singing is, or the pageantry, personally I just don't have a lot of love for them espeicially if it is an adapatation of a successful Broadway play.

I didn't like the film versions of Les Miserables or Phantom of the Opera despite the fanfare so I am not at all surprised that I was rather nonplussed by this production as well.

Produced by Disney and starring a treasure trove of talents such as James Corden, Meryl Streep, Johnny Depp, and my personal favorite Anna Kendrick (there's just something about her) there is plenty for fans of the Broadway musical to love here but there are also going to be people like me that have seen the live production and are going to be perhaps, overly critical of the end result.

For one thing, a vast majority of the filming happens, and I think quite obviously, on a sound stage rather than actually being in any woods at all. This is not a problem if you are in a downtown New York City theater looking at live actors, but I found the decision to have very few location shots to be a bit lazy. I mean we are talking about the very deep pockets of Disney here, so why couldn't they splurge a bit for slightly nicer settings?

The story itself is pretty fun and being familiar with the live production is not necessary. If anything I would say that it may actually work to your enjoyment detriment if you HAVE seen the Broadway production. That was the case with me anyway because I found some of the celebrity actors / singers to be significantly less talented than their stage counterparts. I suppose I am being too picky here. Also, although they did about as good a job as you can expect covering this up, a vast majority of the music / lyrics are lip synced and again, to me at least, this was quite obvious. They don't screw up badly or anything but it just seems a bit strange. 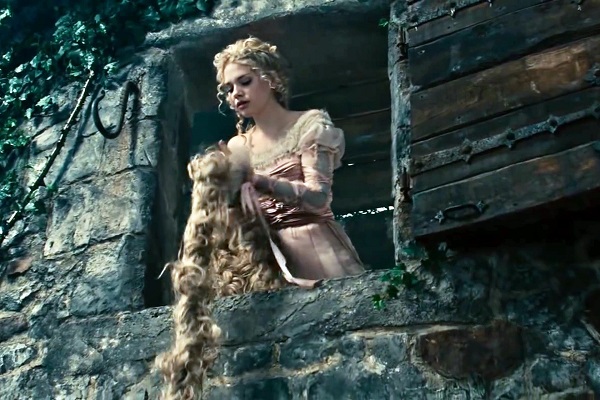 The plot is something that I think most people of any age can immediately be familiar with as it incorporates the major plot-lines of fairy tales that I think just about everyone already knows such as Cinderella, Jack and the Beanstalk, and Little Red Riding Hood. All of these "side quests" are intermingled into one larger story and at least that part of it kind of works.

But here comes my big gripe with this film and it shouldn't be surprising because it is Disney we are dealing with here after all. A lot of the more gruesome elements of the story, which is a big part of what made the Broadway production so special, have been toned down immensely or altogether eliminated probably in the interest of making the movie "family-friendly." The Big Bad Wolf or "Mr. Wolf" as portrayed by Johnny Depp is an extremely tame version of the "Wolf." On stage the wolf actually looked more convincing than it does in a Disney studio with unlimited CGI and having access to doing as many takes as they need to. Depp just comes across as slick-talking kiddy-fiddler who turned up for perhaps one day of filming and simply wore whatever he happened to have on that day.

On stage the princes have multiple lurid affairs with both Snow White and Sleeping Beauty - who weren't mentioned in the film at all. Rapunzel getting "knocked up" also wasn't included. On stage, particularly in the shocking and very dark second act, the body count was gory and massive but in the film version only a few deaths happen and they are carried out in such a child-friendly manner that it isn't even evident that anyone has died.

While I understand why Disney had to do this for the sake of gathering a wider audience and therefore making more money, it seems to me to kind of betray the source material and therefore, a bit part of the reason why this musical was such a hit in the first place. It went from being the stories we all know in act one, to becoming more like real life when things start to go terribly terribly wrong in act 2.

In the film there doesn't really seem to be a "dark period" act 2 and since that juxtaposition of fantasy vs. real world is such a critical aspect of the entire Broadway story in the first place, it is disappointing that it is all but completely missing from the film. Meryl Streep's performance was lauded by critics and this comes as no surprise since it doesn't really seem to matter what role she takes on, she tends to do a good job and at least in the eyes of the various awards committees, she can do no wrong. I'm not going to bad-mouth her. When she is on screen the movie tended to be at its best.

If you have kids and want to watch something with them that everyone is going to know the background of for the entire time (until the 2nd part where the fairy-tales start to go awry) then perhaps this could be a fun popcorn-muncher for the family. There isn't any sort of traumatizing things that happen in the movie and the romance never goes any further than a kiss or two. So if you do have kids, you can watch this movie without being concerned about explicit content.

And therein lies precisely the problem that I had with the whole thing. Other than the songs and the and the very familiar fairy-tales, this story isn't really the story that Into the Woods was meant to be.

If you aren't familiar with the original story, you might enjoy it anyway but for me, making it so accessible for the very lucrative child market (which is what Disney is always going to do) kind of made it not worthy of a watch.

My overall jaded and biased rating?