Mental Illness is a challenge for the contemporary science. Darkness Visible: A Memoir of Madness by William Styron. | Showcase Sunday 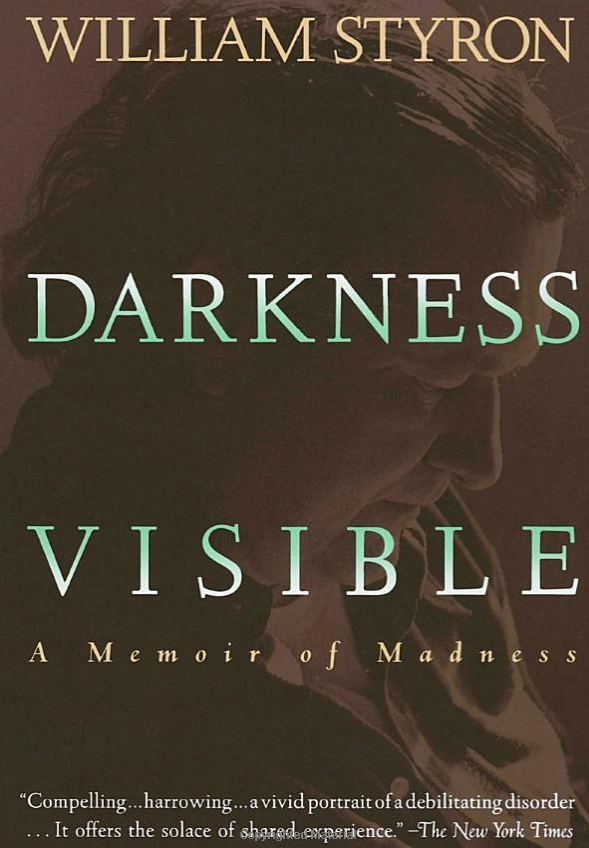 This is a short essay based on William Styron's book Darkness Invisible: A Memoir of Madness.

In the middle of the journey of our life I found myself in a dark wood, For I had lost the right path -- Dante (Styron p.83)

We all experience illnesses in our worldly lives. Most of us are mostly familiar with physical illnesses, and the pain they cause. We have a clear understating of the pain the regular headaches can cause, we all have experienced melancholy in some level. For most of us it is come and goes in a very short period of time, and we have an ability to control it by taking a pill or taking a nap.

Reading Darkness Visible, one can understand and feel that mental illness, which is mainly explained as a depression and melancholy, is not the regular headache or depression what many people experience in their regular lives. William Styron explains this through his own experience and says: “I was feeling in my mind a sensation close to, but indescribably different from, actual pain.”

All of us in some particular part of our life feel like this. There are days when we are gloomy and in deep depression. Sometimes we feel we are in dead-end. However time cures us and we keep on living our normal lives. Unfortunately, there are some people who experience melancholia continuously. It is impossible to understand fully what kind of pain that illness gives. Styron calls that pain “indescribably different from actual pain”. However, as a purpose of his Darkness Visible he tries his best to describe how to be in that state of being.

“I fell onto the bed and lay gazing at the ceiling, nearly immobilized and in a trance of supreme discomfort. Rational thought was usually absent from my mind at such times, hence trance.” He continues: “a cognition of helpless stupor in which cognition was replaced by that positive and active anguish.”

We all know nowadays that mental illness is a disorder characterized by disturbances in a person’s thoughts, emotions, or behavior. Styron in his Darkness Visible suggests an idea that writers and poets are particularly vulnerable to this kind of disturbance and disorder. He gives examples of many writers and poets to support his argument. I support his argument in a sense of writers and poets are people of thoughts and they are very emotional. While creating their works they plunge into deep thoughts about problems they see around which they want to describe in their works. They try to find the meaning what they see and think about. Sometimes it is not easy, especially it is not easy without concentrating on that issue. They need to be in their world of mind, away from the real world. They keep traveling to and from real like to their imaginary life. I think the melancholia comes when they are just in between those lives. The pain that disease gives when they are in that inter-lives condition. Styron explains how it might take to suicidal actions. “If depression had no termination, then suicide would, indeed, be the only remedy.”

Even though medical science is very developed in our contemporary world, medicine is still not developed enough to struggle with mental illness. There are many controversies in treating depression. Many of those afflicted with mental illness do not want to be treated with drugs, believing that the root of their illness is not necessarily in their bodies but either in the world in which they live or in their spirit or mind. They often seek psychotherapy for the treatment. However, large part of the medical community itself strongly defends the use of pharmaceuticals, arguing that depression is a result of faulty brain chemistry and that drugs are the most effective form of treatment for sufferers.

Styron makes remarkable observations on depression through his own experience and he offers us a better understanding of the phenomenon of mental illness. “The pain of severe depression is quite unimaginable to those who have not suffered it, and it kills in many instances because its anguish can no longer be borne. The prevention of many suicides will continue to be hindered until there is a general awareness of the nature of this pain.”

Many people in our society and in the whole world have been suffering this kind of disease. Not being able to understand the nature of this disease we sometime mistreat and react with carelessness to those who became victims of mental illness. Not only the society itself but even medicine is negligent and weak to treat people with this diseases. Styron talks about Halcion, whose chemical name is triazoalm, and says that it had a causative factor in producing suicidal obsession and other aberrations of thought in susceptible individuals. “I’m convinced that this tranquilizer is responsible for at least exaggerating to an intolerable point the suicidal ideas that had possessed me before entering the hospital”, he says. After Styron’s medication was switched to Dalmane his suicidal notions dwindled then disappeared.

William Styron explains his experience of taking Group Therapy as he was getting better, and then he went through Art Therapy. As he explains Group Therapy was a way to occupy the hours and Art Therapy was more or less the same. A large part of his finding a cure was finding the right kind of medication, with taking therapy as an adjunct.

Science will go on in the exploration of this phenomenon, and artists also will contribute their own share in this exploration as did Styron. The search for a clear representation of its meaning, “which sometimes, for those who have known it, is a simulacrum of all the evil of our world: of our everyday discord and chaos, our irrationality, warfare and crime, torture and violence, our impulse toward death and our flight from it held in the intolerable equipoise of history”, is desperately needed and hopefully it will go on and better ways of treatment of these illnesses will be developed. It is obvious that Styron was suffering. He didn’t know where this disease came from, but he wished it would go away.