Travel to Crusader Castle & the Past, Jordan 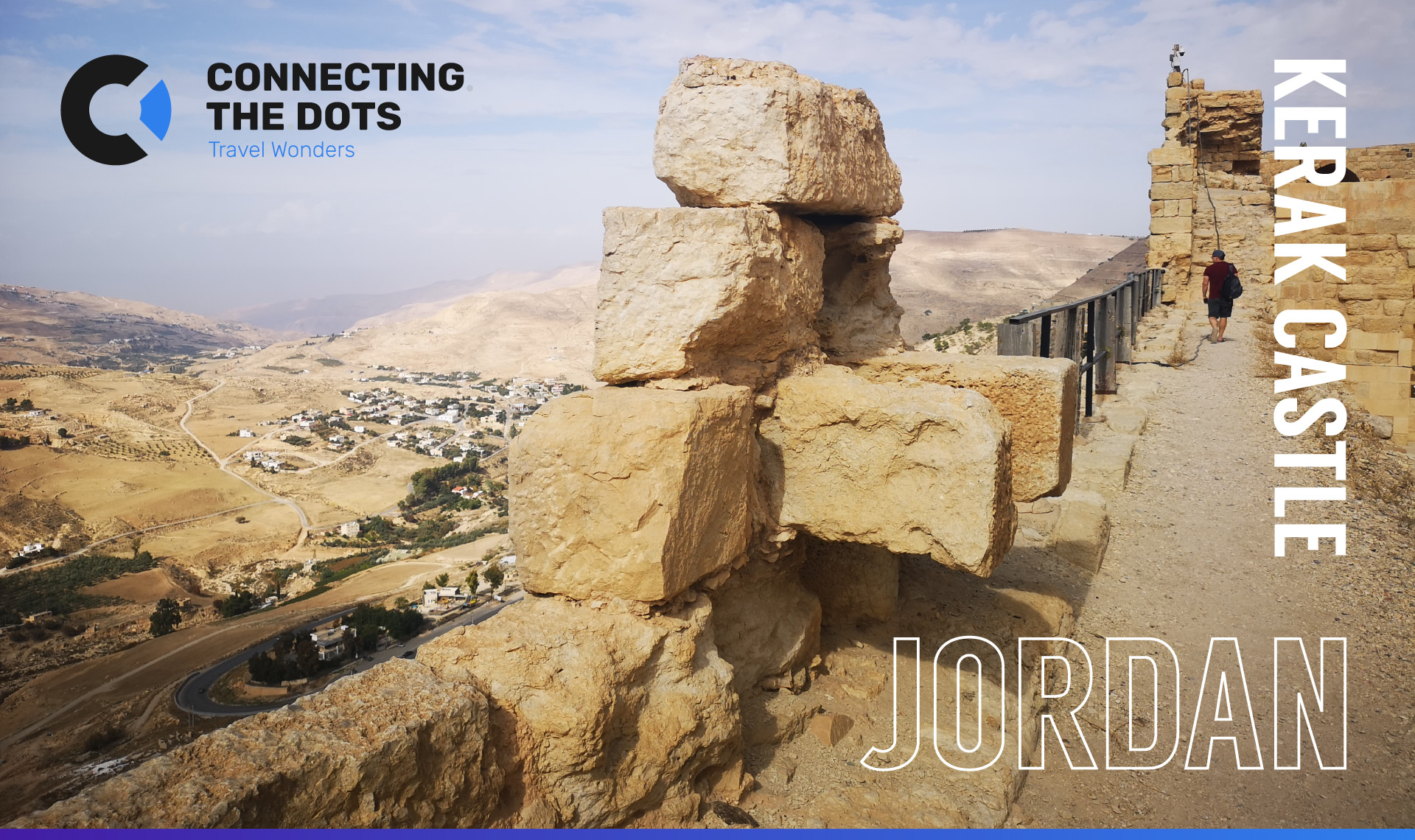 Read "Travel to Crusader Castle & the Past, Jordan" on TravelFeed.io for the best experience

Echoes of from the Past

The Crown Jewel of all the castles built in Jordan during the Crusade times. The Castle has 16 towers, with the biggest being the tower of Baybars. Kerak Castle is an interesting place to visit, but it is far from its greatness. The sieges and ages throughout it stood, heavily damaged it.

Walking through the dusty halls and walls of Kerak Castle, I couldn’t help myself but wonder how did it feel looking at vast Saladin armies during the sieges. These highly religious people were been speaking to God constantly. It was not only a matter of Life & Death but a matter of acting in the way of the only true God. Both sides saw each other as heretics. 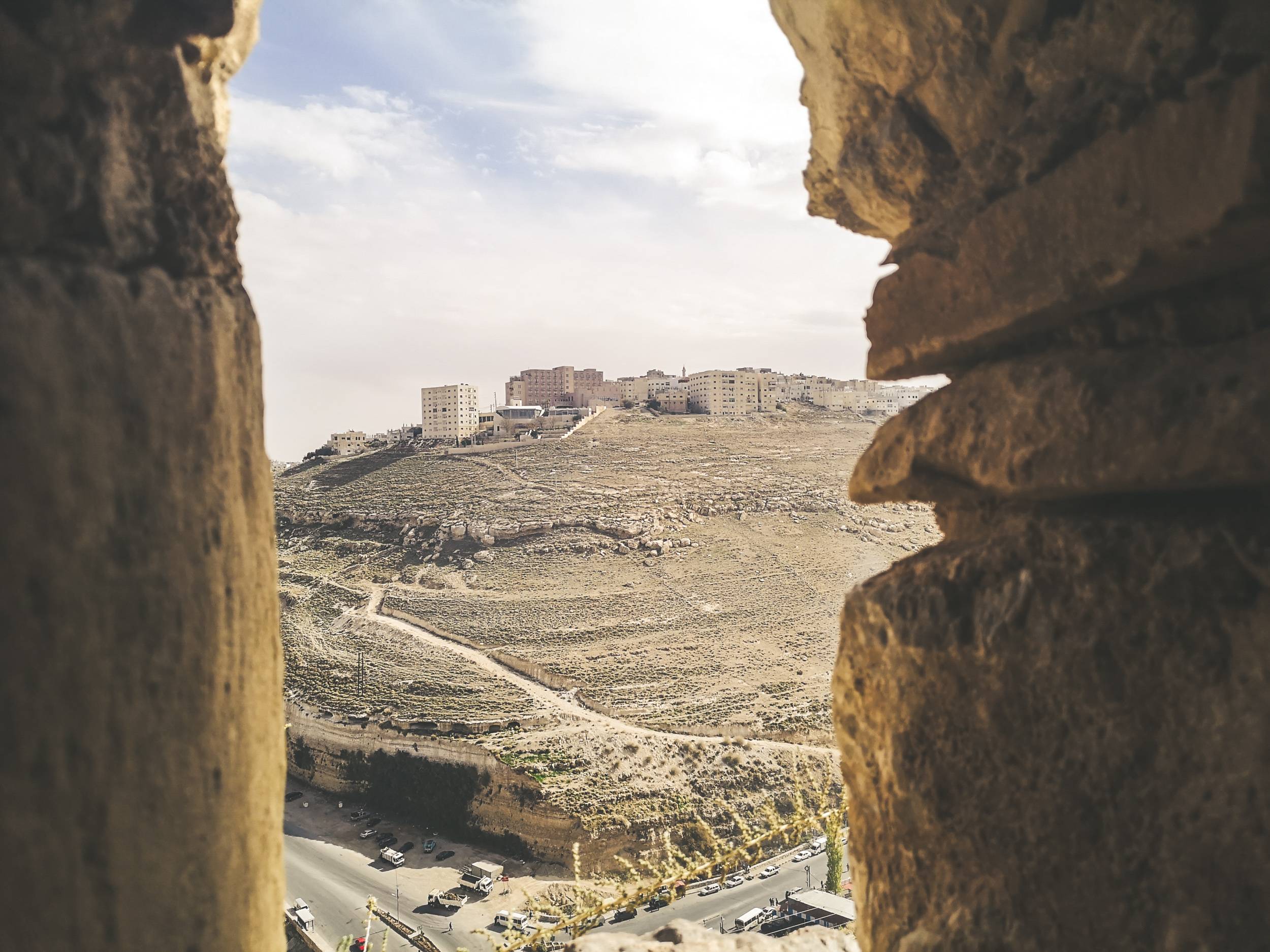 Even more interestingly, maybe on this dramatic spot, after a victorious battle against the Israelites, King Mesha rallied his troops:

Listen, today we fought bravely and we liberated our homeland from the sons of Abraham. But never forget that alone we couldn’t do so. We must thank all-mighty Chemosh for he stood with us again and praise him as our Father and Mothers taught us so. Never again we will let the sons of Abraham command unto these lands for they don’t know the power of Chemosh. They haven’t seen it as we did. Never again we will anger Chemosh! 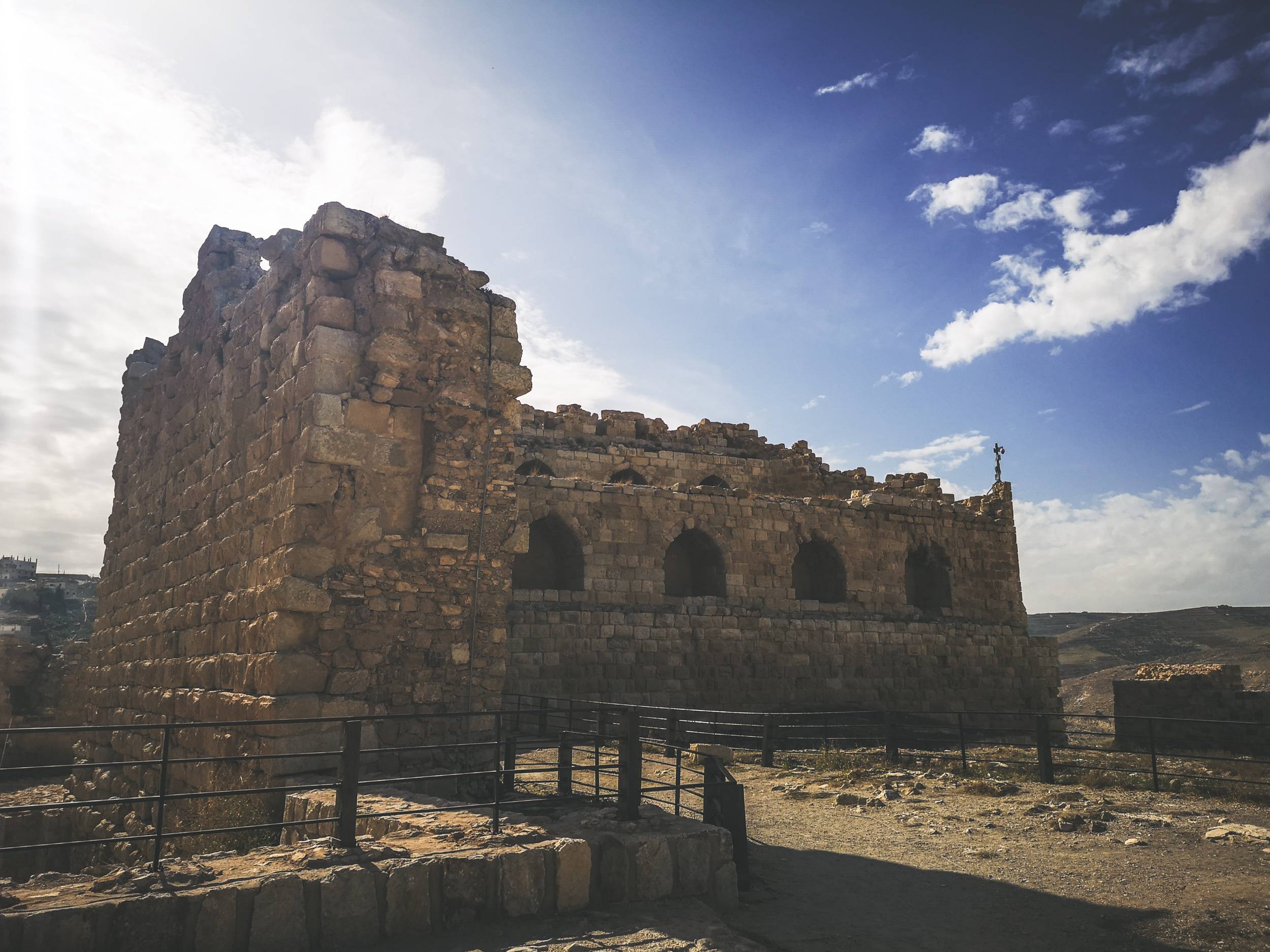 The name of the castle comes from the town it was built in, al Karak, Karak is taken from ancient times when Arameans been here, in Aramaic word Kharkha means town. It was often called by the Crusaders and in history books as Karak of Moab.

Israelites knew al-Karak as Kerak. Further on I’ll use the local name from the castle and the settlement. 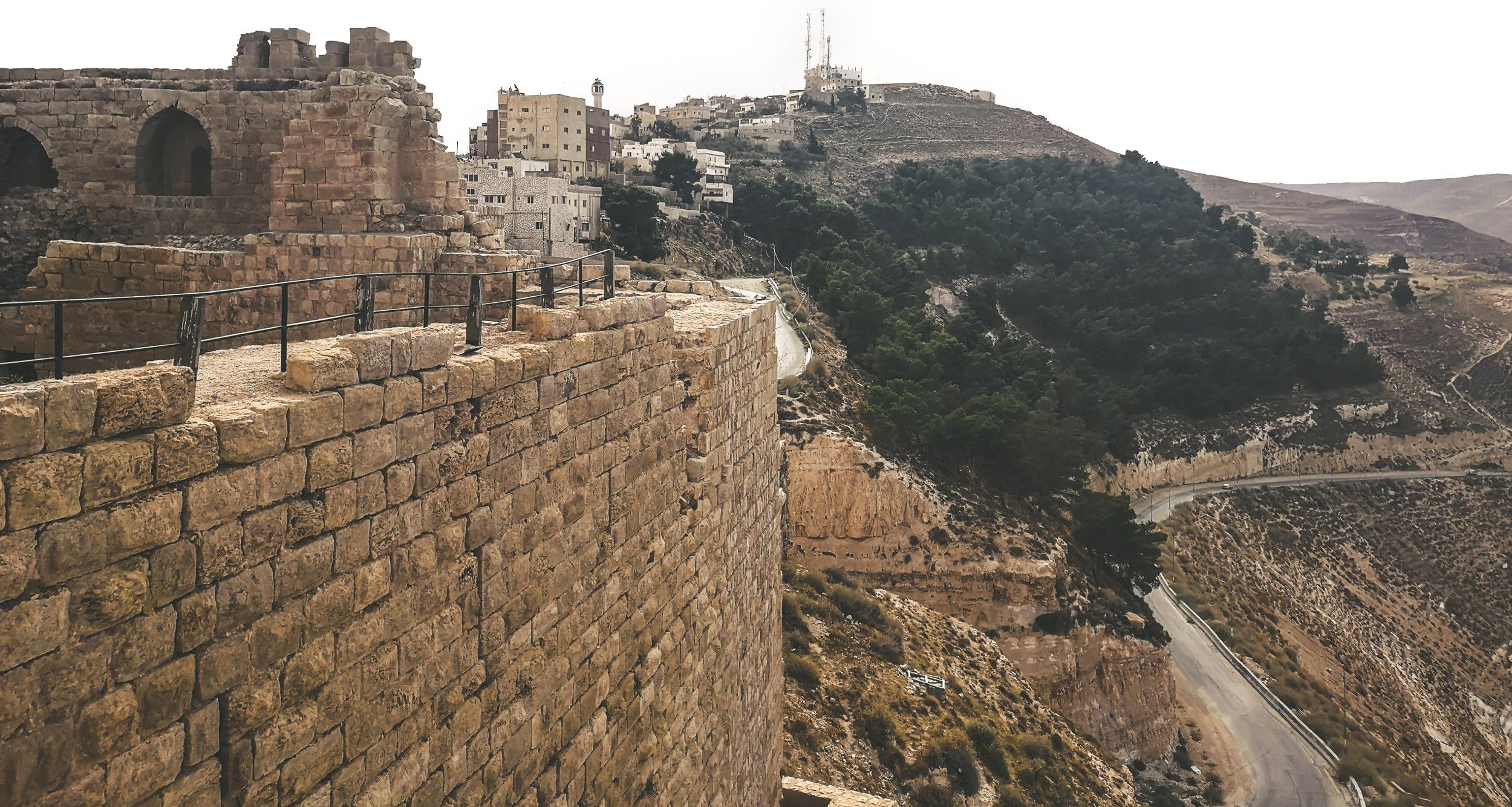 While the history of al-Karak castle itself dates to 1142 AD when the crusaders built it, the point where it stands dates almost to the very edges of known history of the humankind. After all, Jordan is among the countries where the known human history began. 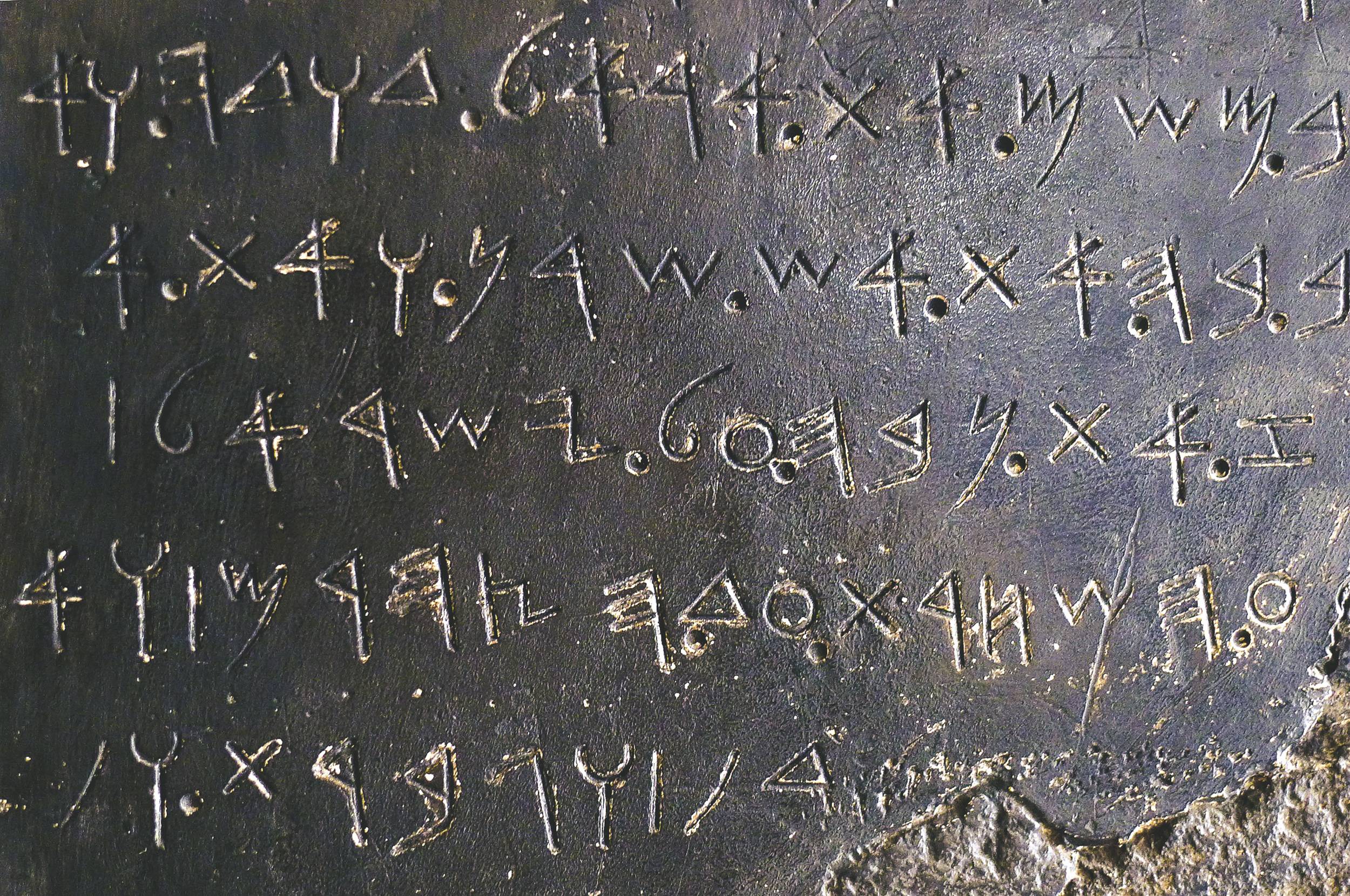 Before the al-Karak Castle, this area was controlled by Moabites, people who lived in the Eastern region to the Dead Sea. Karak was mentioned in the Bible several times in various names as Moabites were often in rivalry with their neighbor Israelites to the west of the Dead Sea. 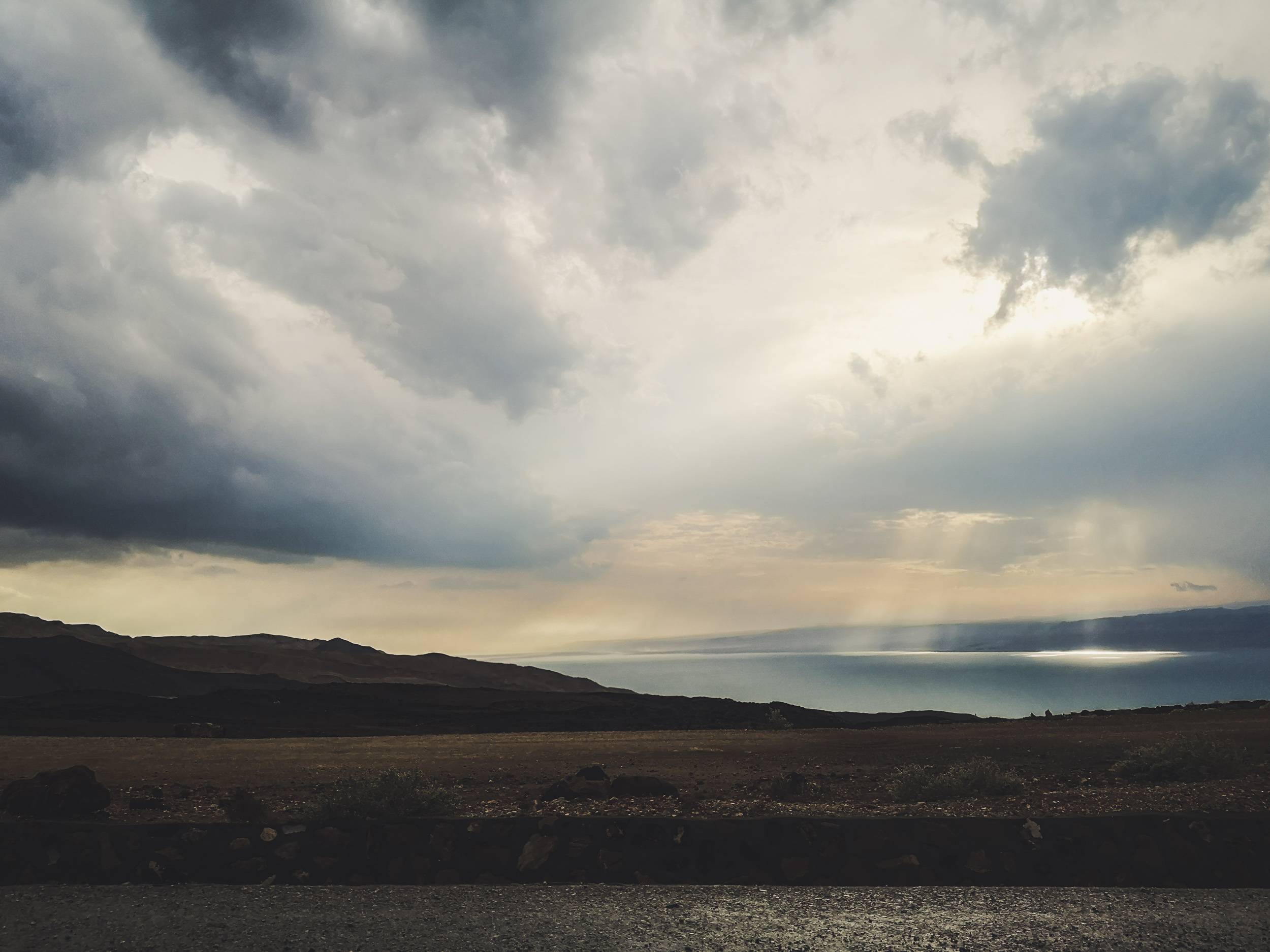 According to the Book of Genesis, both Moabites and Ammonites are Lot’s sons born to his daughters after the incest. Though poor Lot had not much to do because his daughters got him really drunk. Apparently, the girls did so because they were afraid that their bloodline will end.

Based on historical inscriptions, Mesha, the King of Moabites, built a castle as a temple for their God Chemosh in 850 BC. The name translates to either “destroyer”, “subduer” or “fish-god” which could make sense if the Moabites were, in fact, the sons of Lot who witnessed an unearthly powerful destructive force once he fled Sodom and Gomorrah. You don’t want to upset whoever is responsible for that destruction, don’t you? 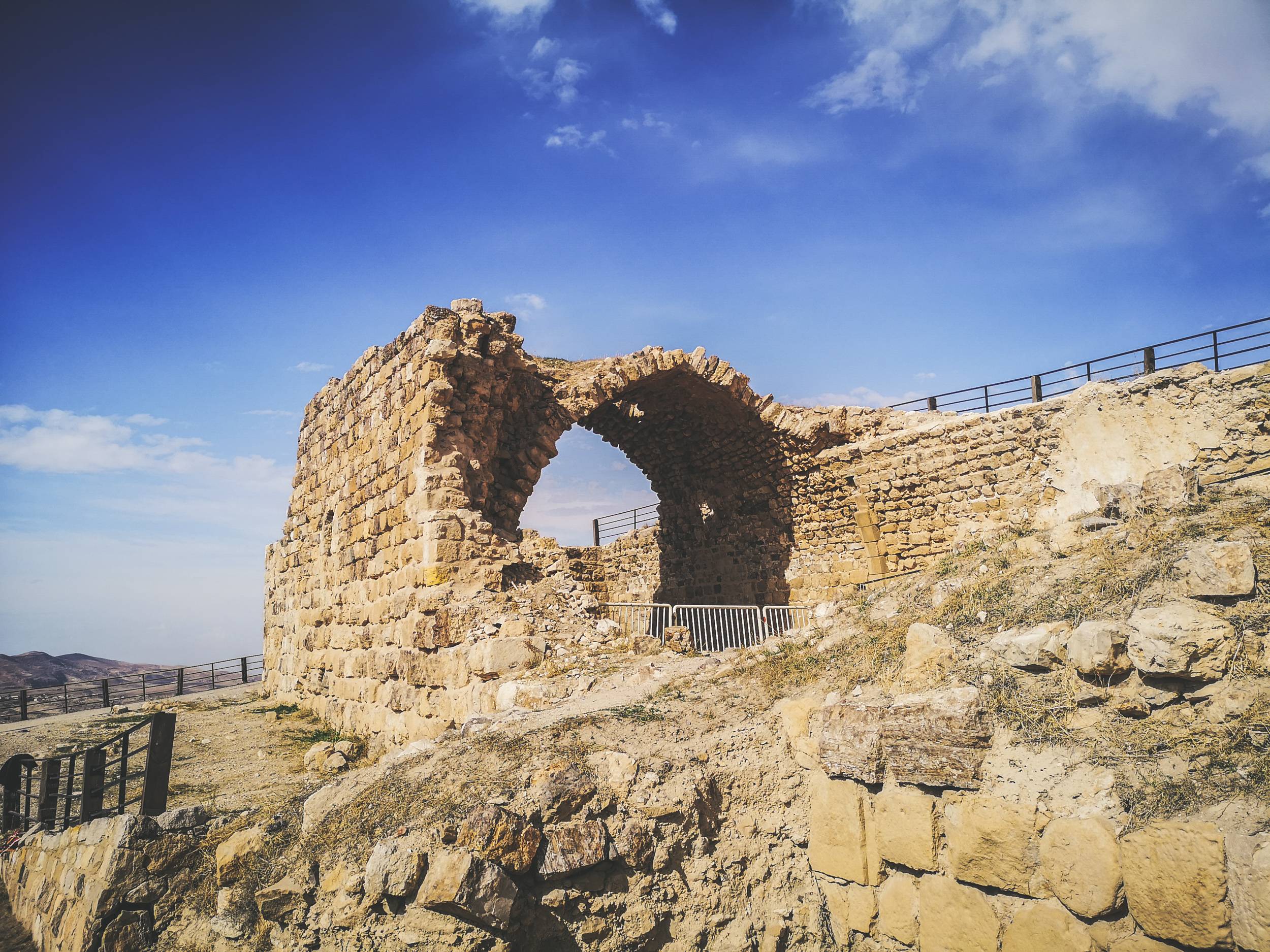 Anyway, the Temple was built probably after a major victory as a sign of gratitude to Chemosh. The Kingdom of Moab was under the control of Israelites after King David conquered it somewhere in 970-1000 BC. In the same year as al-Karak Temple supposedly was built, King Mesha liberated the Kingdom of Moab from the Israelites. 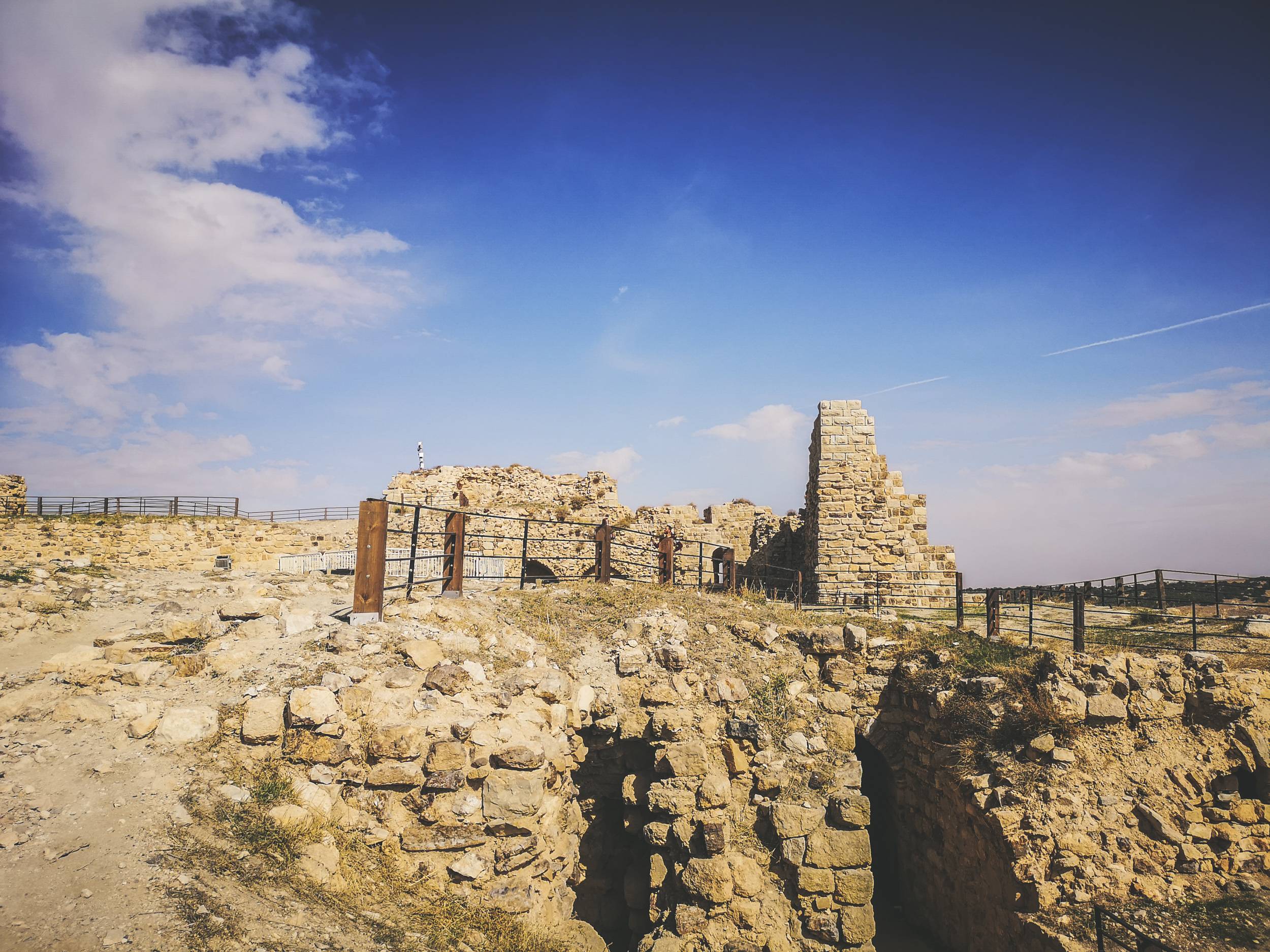 Little is known what happened to the Moabian Temple of Chemosh, but apparently, Franks built an impenetrable castle on it in 1142 AD. It instantly became the center of the region, replacing less fortified Montreal Castle to the South. It was built under Fulk, the King of Jerusalem and Pagan, the Lord of Oultrejordain. With the taxes imposed on passing caravans and the food grown in the region, the newly built castle helped Jerusalem to prosper. 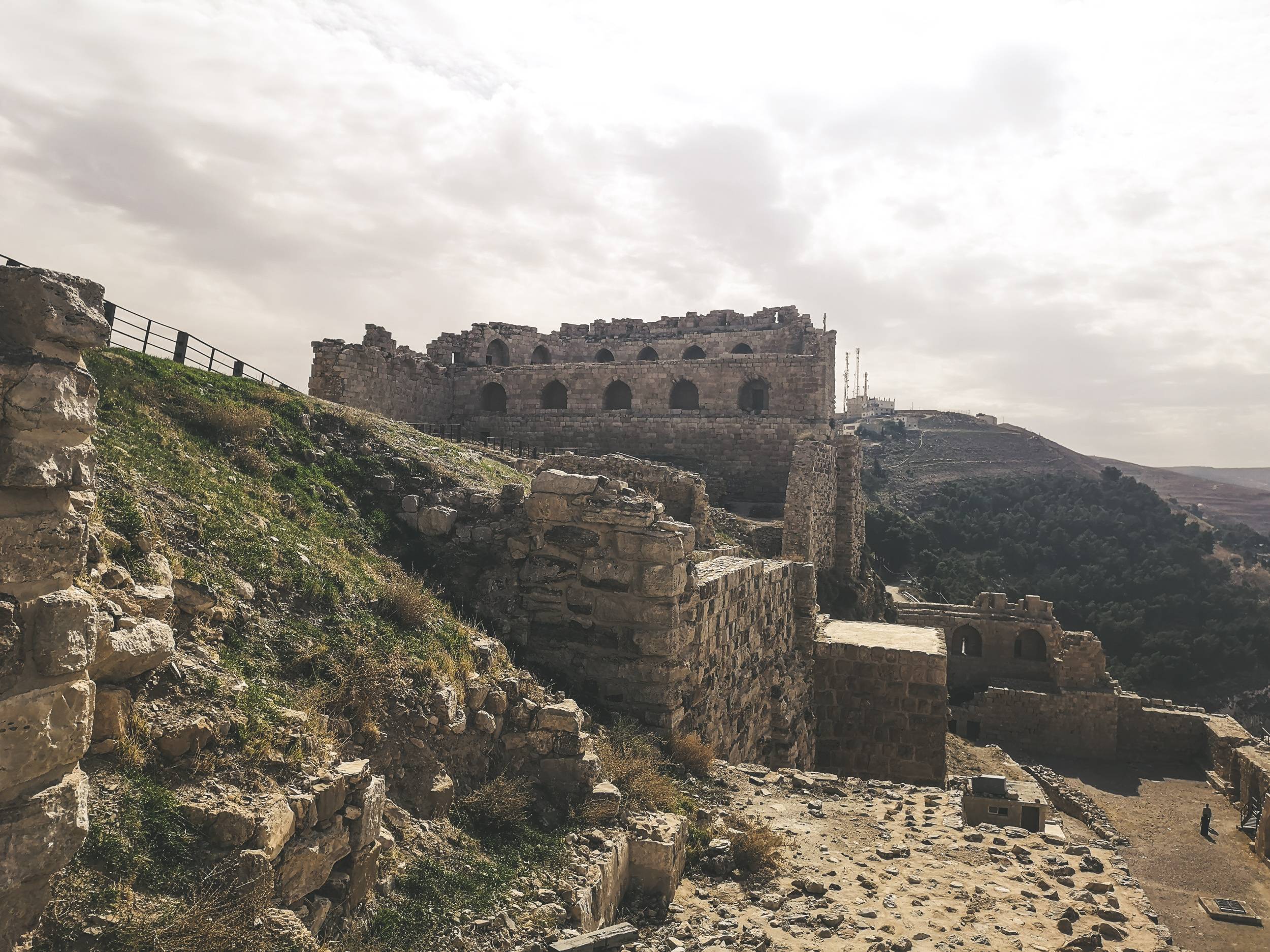 After marriage with a widow of Humphrey III of Toron, Stephanie of Milly, Reynold of Chatillon became the Lord of Karak Castle in 1176 AD. Lusting for power, he harassed camel caravans and even attempted an attack on Mecca. This, of course, got the attention of Saladin, the Sultan of Syria and Egypt. He besieged the castle in 1183 AD but withdrew once the reinforcements from Jerusalem were close. He did the same in 1184 AD and after 4 weeks of a siege – the results were the same. 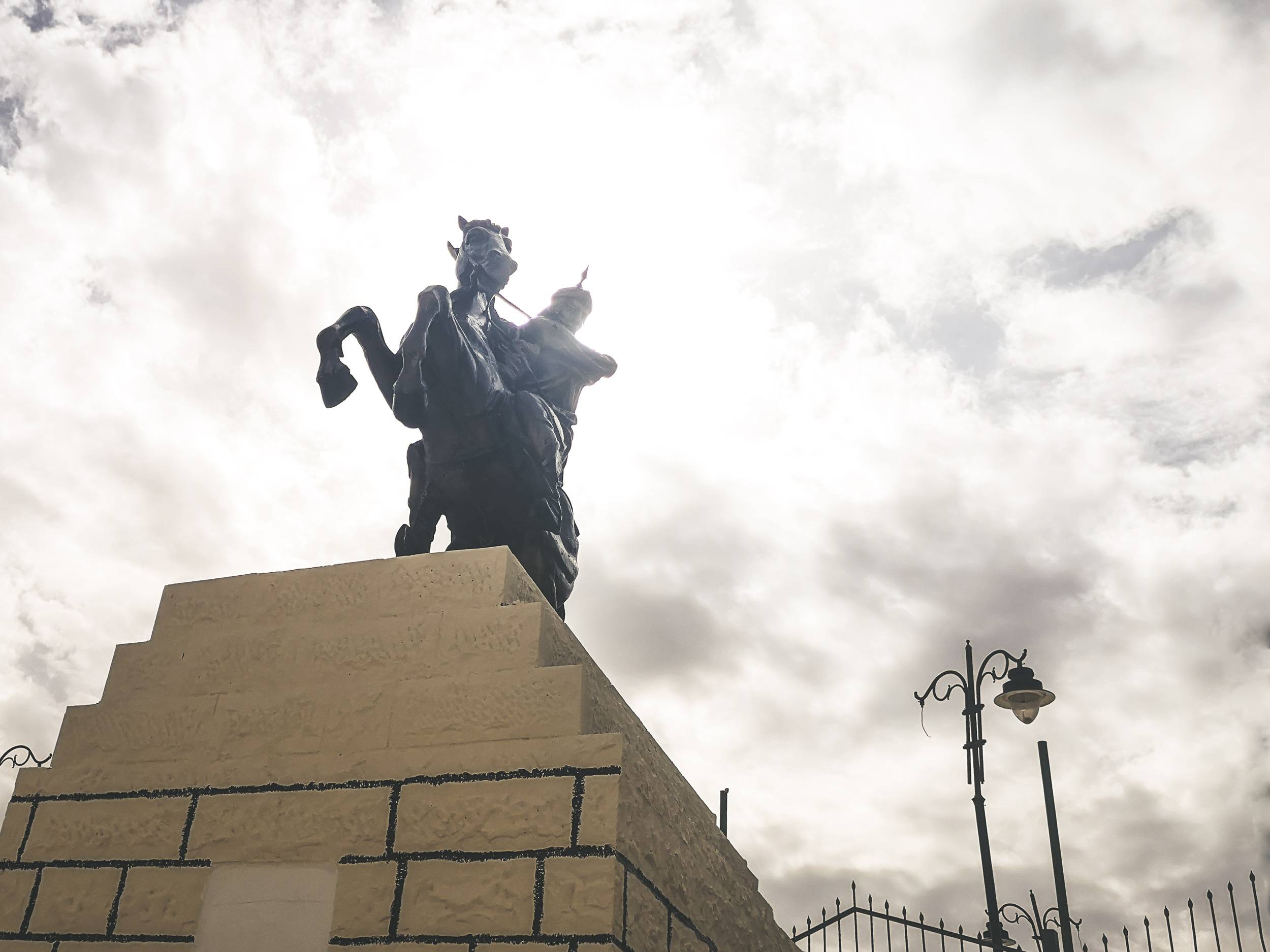 Nevertheless, after a few failed attempts, Saladin’s nephew successfully took al-Karak Castle in 1188 AD after Saladin’s forces defeated outnumbered Crusaders army in the Battle of Hattin in 1187 AD. Nobody was there to send the reinforcement to defend the al-Karak Castle anymore. Muslim armies cut off the supplies to the Castle and it surrendered a few months later. After the defeat of al-Karak Castle, Montreal Castle has to surrender as well. Meanwhile, Jerusalem was taken by Saladin forces with relative ease.

Mamluks were warrior slaves in Arab armies since the 9th century, but they flourished under Ayyabid Dynasty after Saladin replaced Fatimids Sultanate infantry from North Africa to Central Asia’s Kipchak Turks. They were instantly transformed to Sunni Islam and went under a heavy training of Martial Arts and various teachings. Mamluks had higher status than other slaves and regular citizens. After the training, they were freed but had to remain loyal to their master. And so they did. Mamluks were very loyal & powerful troops. 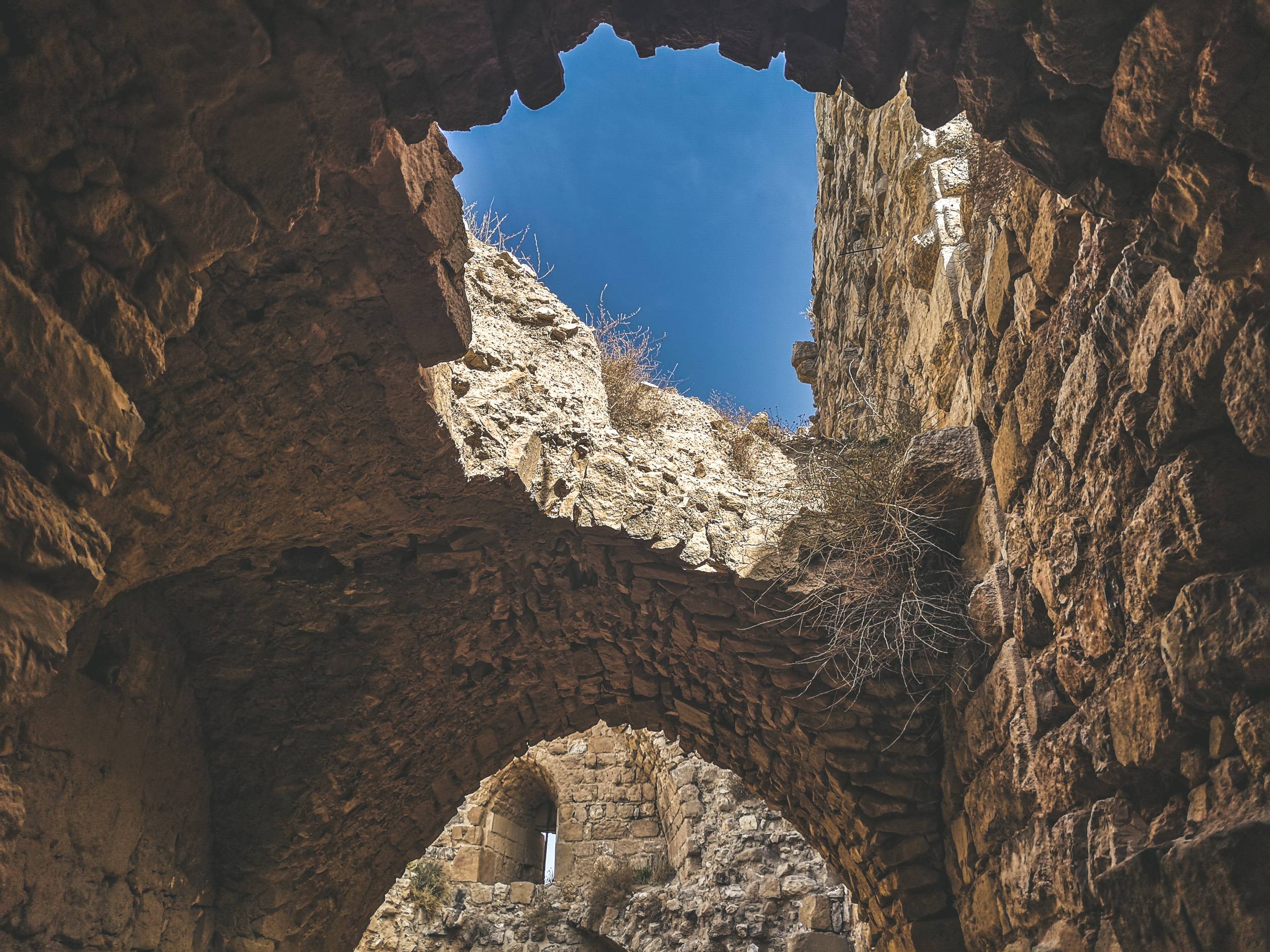 Nevertheless, sooner or later once you get some power, you start to want even more power. It is the destiny of the son to overthrow his father. That is exactly what happened in 1249 AD when Louis IX of France captured the city of Damietta in their attempt to conquest Egypt during the Seventh Crusade. The strategy to withdrew the defending forces from the city did not satisfy Mamluk leaders and this is how the struggle between Ayyabid Dynasty and the Mamluks started.

Later on, it was the Mamluks who stopped the Seventh Crusade by capturing the Louis IX. They seized the total control over a region when they were the only force capable of defending the Muslim world from Mongol invasion. 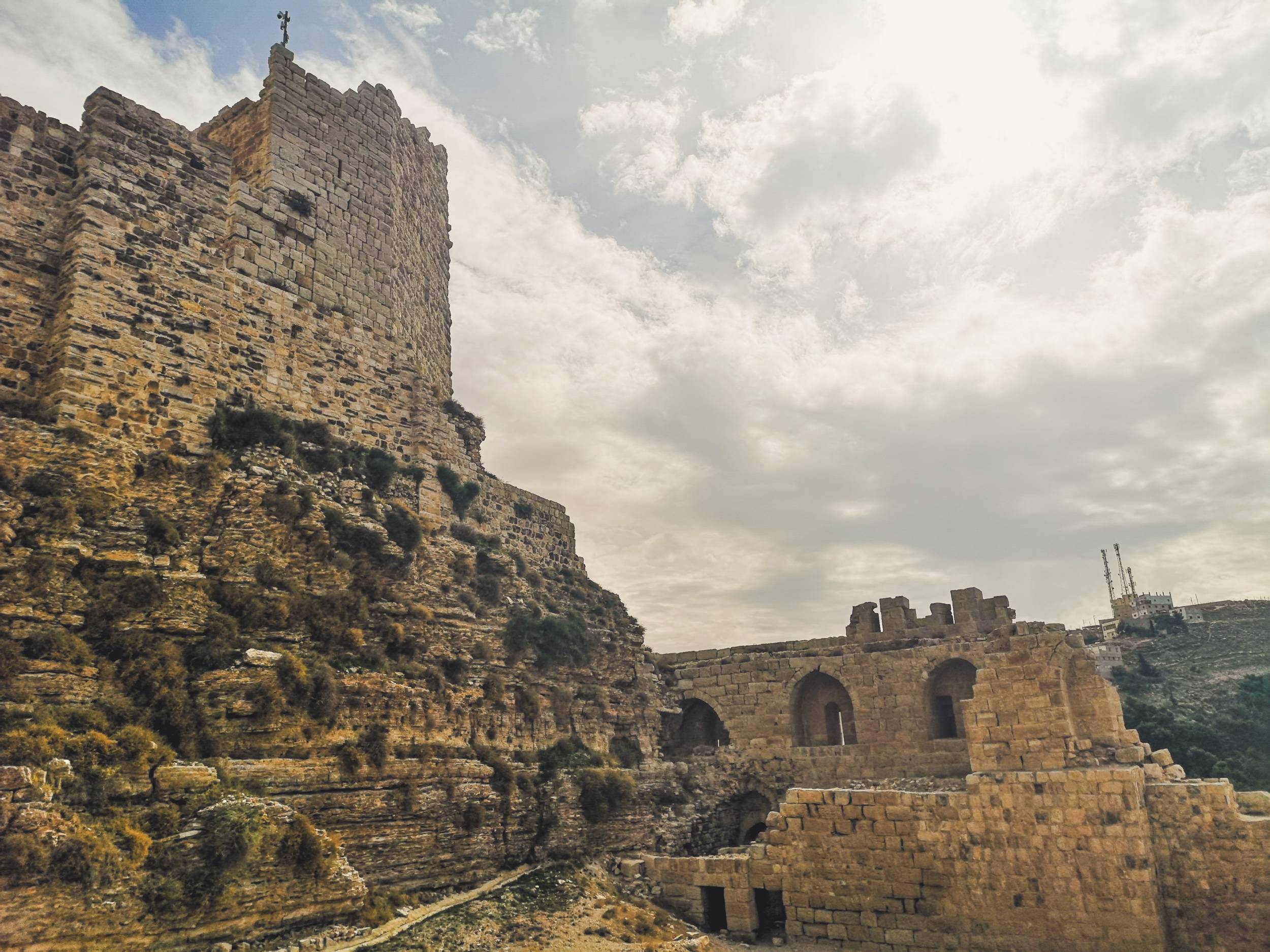 Mamluk leader, Baybars I gained total control in 1260 AD and established Bahri Mamluk Sultanate in Egypt. Baybars captured al-Karak in 1263 AD and reinforced the Castle further. Mamluk Sultanate remained in power until 1517 AD when the Ottomans conquered the region.

Ever since little was known until Swiss explorer Jean Louis Burckhardt, the same guy who tricked the Bedouins into the discovery of Petra, passed by the al-Karak Castle, describing it as shattered, but imposed. 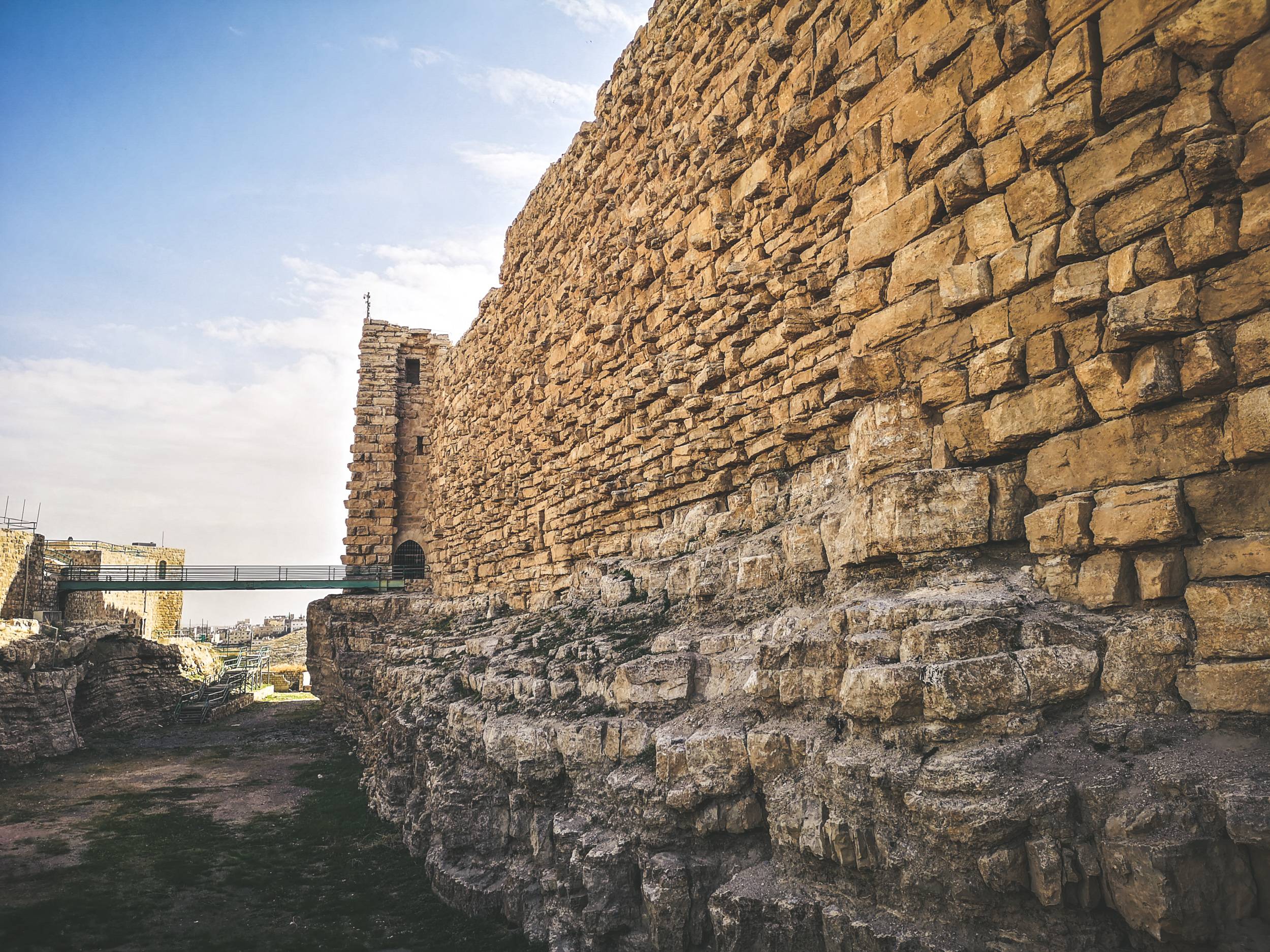 It was built 950m above the sea level, on a strategically important point in the middle between Shoubak Castle and Jerusalem. It is one of the biggest crusader castles in the whole Levant, a territory in Syria and around. Because of its location just to the east of the Dead Sea, whoever ruled the Castle could control the trading routes going from Damascus to Egypt and Mecca.

My Impression of al-Karak and Kerak Castle

Before you go to the Castle, be sure to visit Saladin’s statue nearby. It stands next to a mosque in a small square, not to far from the Castle itself. After you pass the bridge to the Ottoman gate, you’ll be met by a guide which will kindly show you directions of the Castle. He will point towards the center of al Karak Castle upstairs on the left, but I would offer to go to your right to enjoy the picturesque scenery of the panorama around. 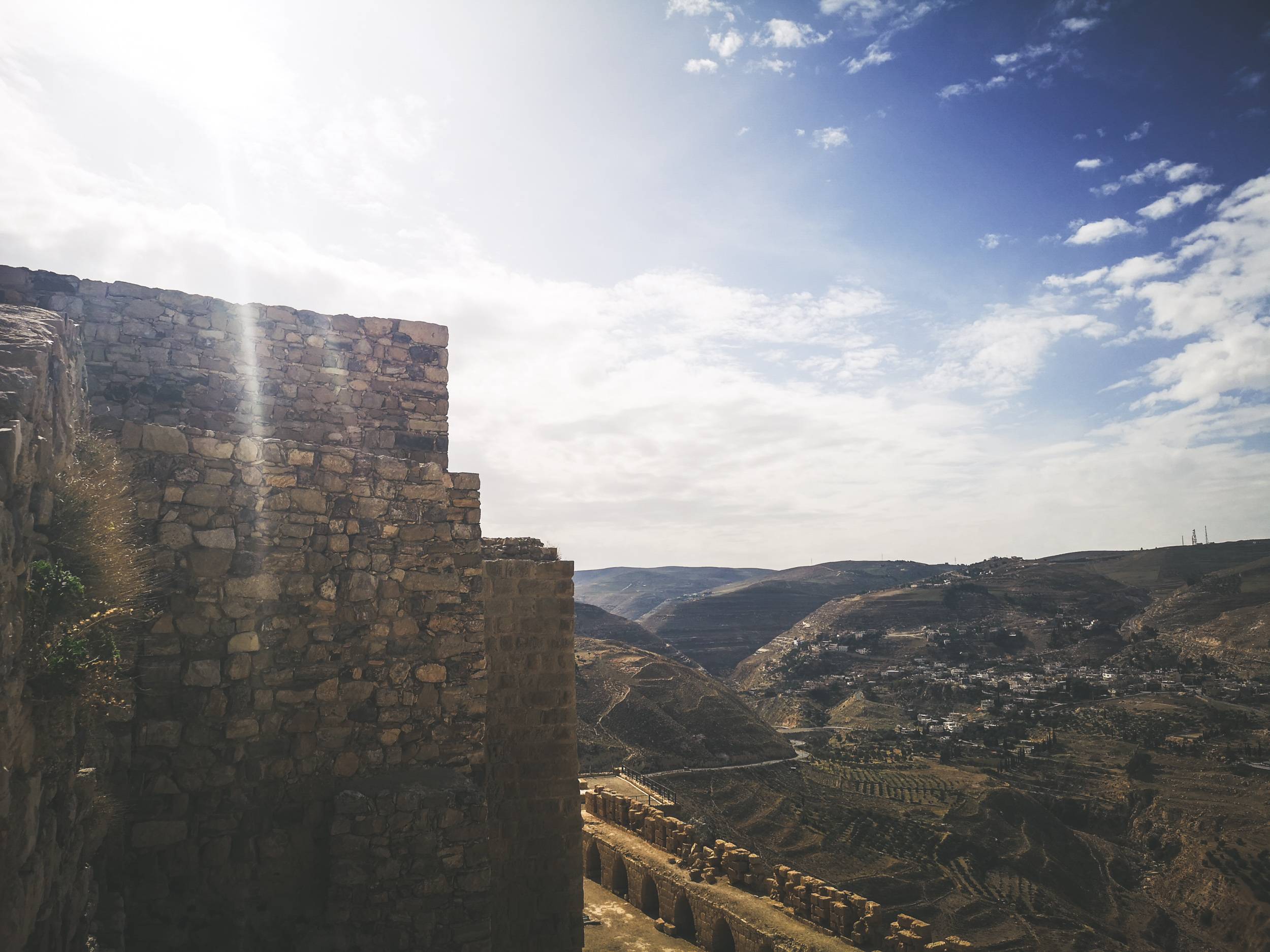 The ticket office is somewhat hidden and easy to miss, if you do so, you might get shouted at. Just be sure to check it on your left, as it might be covered by a tourist bus.

Be aware of the scam, don’t park near restaurants unless you eat there. If you drive further from them, people still might come to you and insist that the parking is free only if you visit their restaurant. Don’t mind them, the actual places reserved for restaurant clients are the ones with chairs on them. The city is not that big, so just drive 50m further and you should be OK. Just don’t forget that not everyone here is to scam you, some people just trying to help. 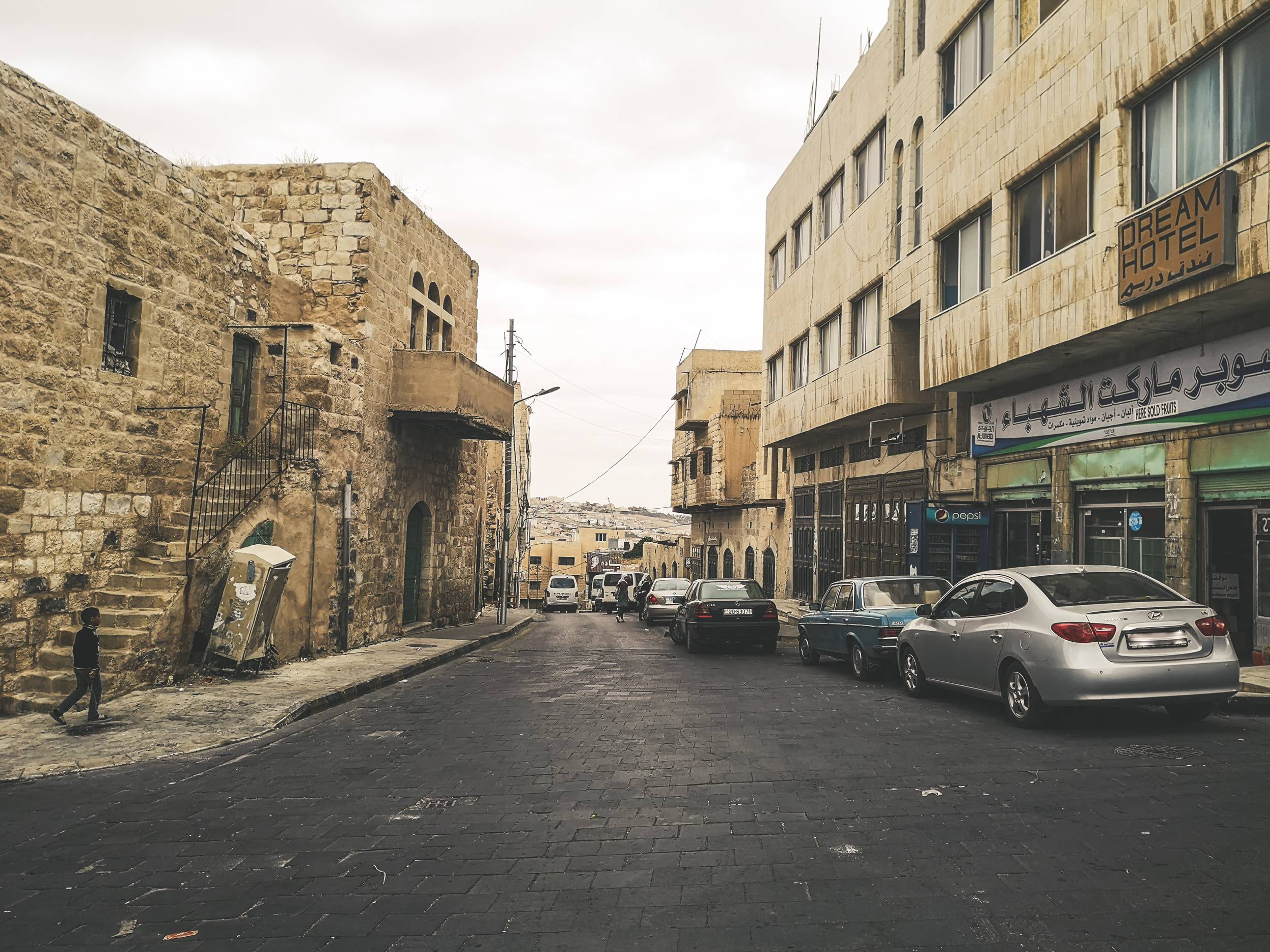 Avoid King’s Restaurant and King’s Castle Restaurant. Meals are overpriced, and you might even get something you didn’t order. If you must eat, go to Kir Herrs nearby, prices there are way more tolerable and has nice reviews on TripAdvisor. Portions are not the biggest, but the food is tasty. It will be enough for breakfast or brunch until you reach a bigger city with more places to choose from. 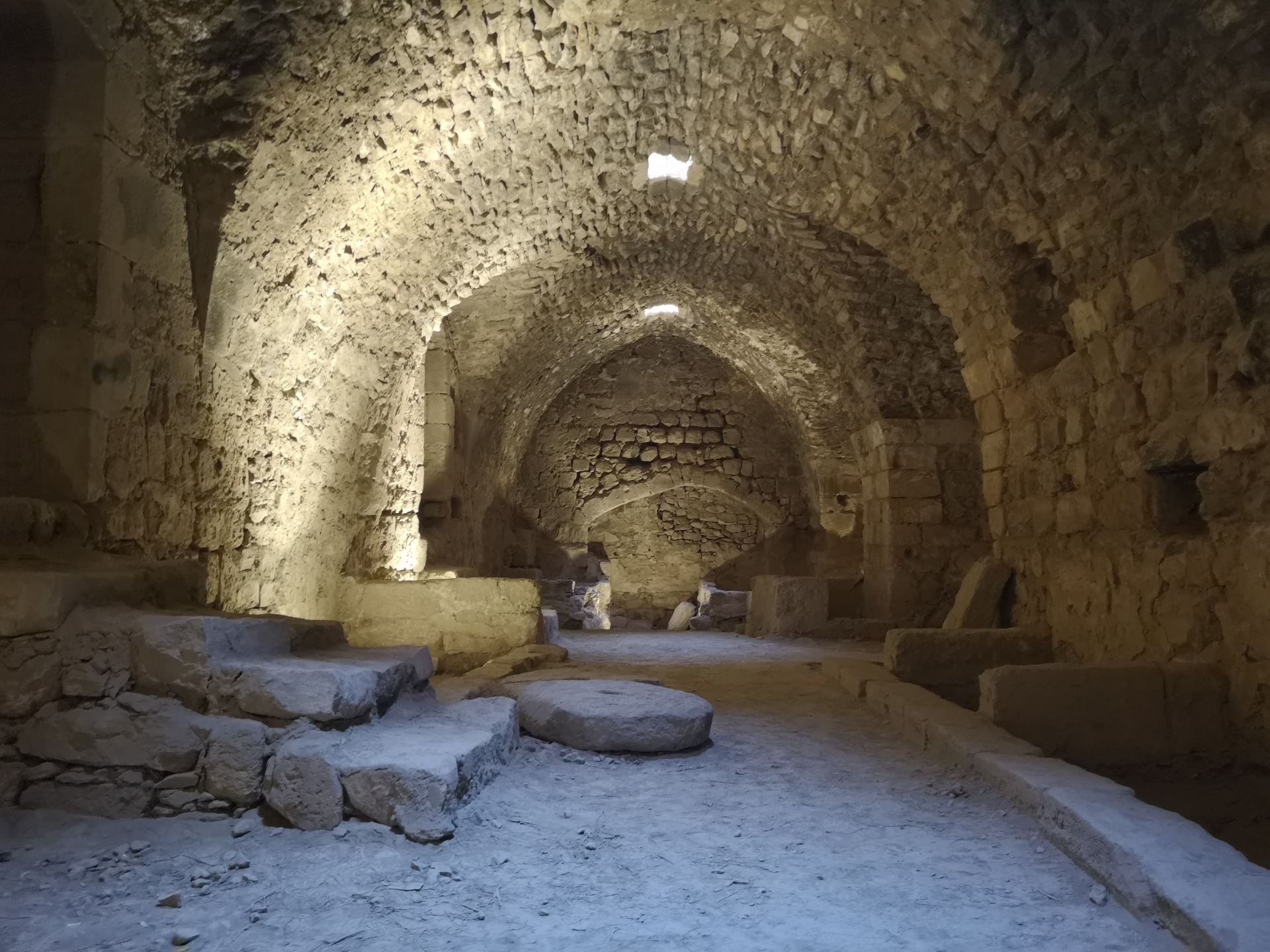 It was fun exploring the Castle, but it can be enjoyed the most, once you do your homework. What looks like a pile of bricks, actually has a very interesting and rich history. For me personally, the most interesting part was walking around by the castle’s walls foreseeing the vastness of the horizon. This where the imagination comes to live.

Al-Karak Castle is one of those places where it is well worth your time to explore every corner. It is allowed to walk almost anywhere including the tunnels of the Castle. There is some light installed in al-Karak, but if you want to really explore it – be sure to take some extra flashlights so you could see what is beneath it. If you decide to visit any of the Crusader Castles around, visit al-Karak. 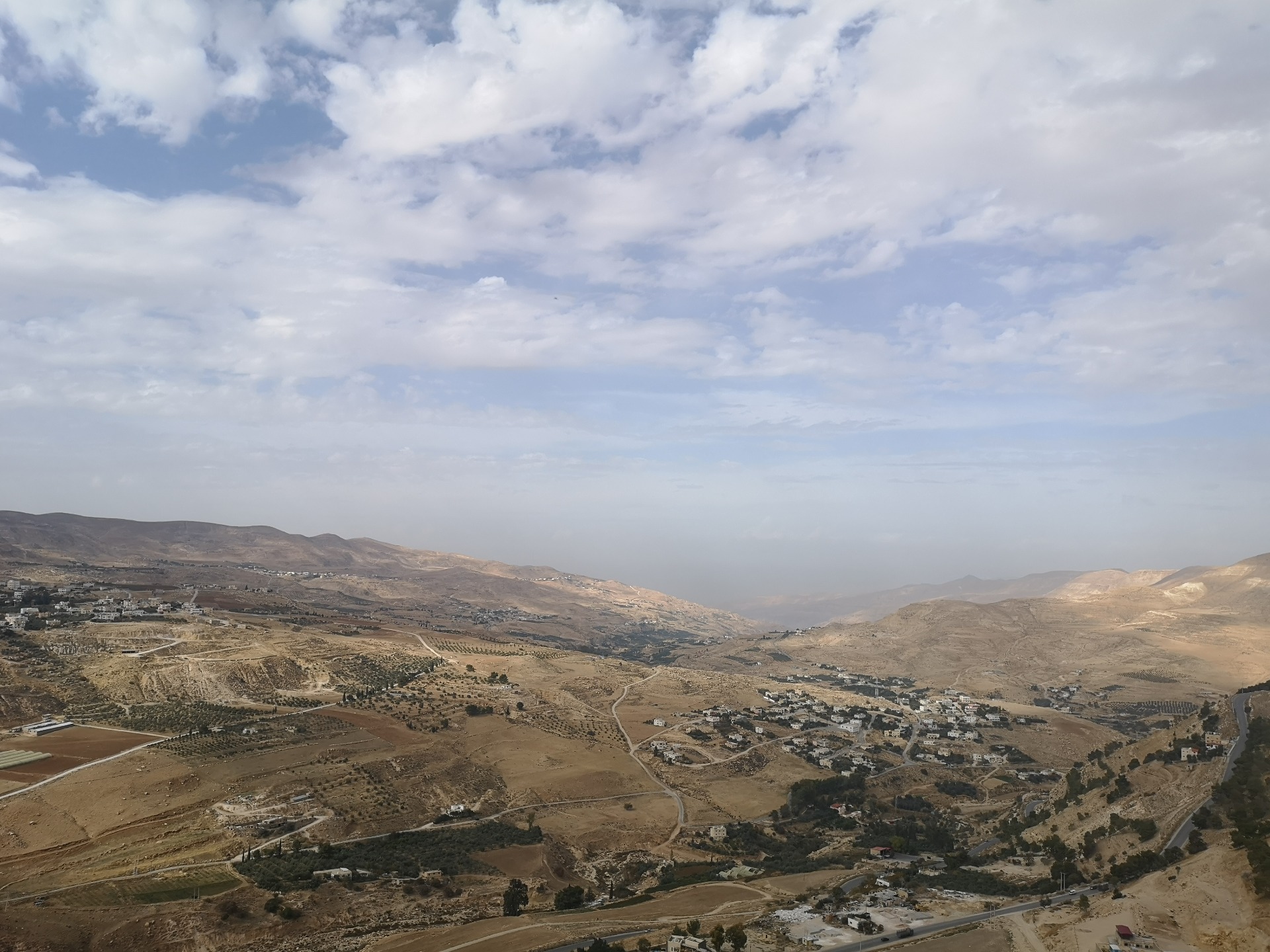