Political Wish List - The absurdity that we expect from politicians. 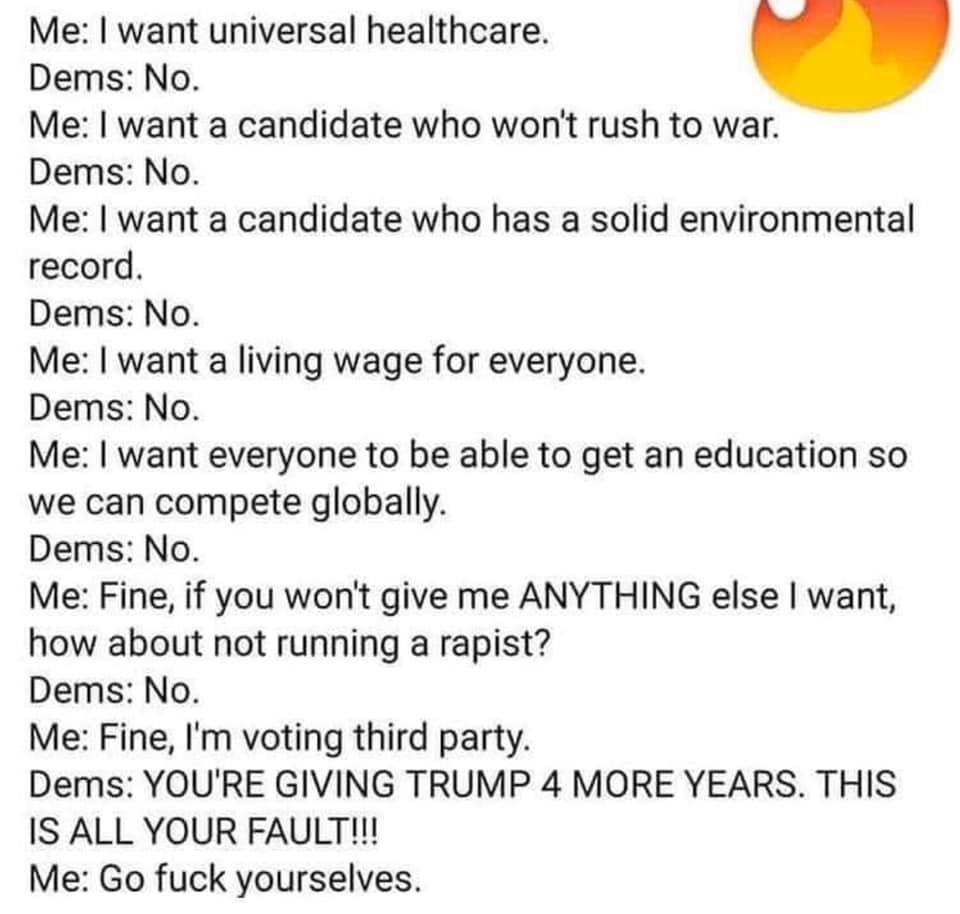 There is a problem with this.

And it is the core problem between the right and the left. Everyone wants lots of things The Dems just want the things The Reps say, wait a minute, we have to pay for these things (well they used to, but maybe that was just lip service.)

You can't have universal healthcare.

The left says we just need to throw more money at it. The right says we can't just buy more doctors, we have to train them.

And, the solution? Kick feminists out. Get rid of equality and affirmative action.

Give grants to men ONLY to become doctors. Apply a 50 point deficit to women applying to medical school.

But, no politician will touch that with a 10 foot pole.

(because female doctors, at very high percentages, drop out to become mothers, and most often only work part time, if they work at all.)

Environmentally friendly and a living wage?

So, you build something. How much of the profit from selling the item should go to cutting down pollution and how much should go to wages?

You can't spend it on both.

The only thing we can do is wait for entrepreneurial inventors to think up/create better ways to do things.

Under all the communistic govern-cements, they killed this group of people off. So, no communism doesn't get these either.

The desire to compete globally...

While "gender studies" is an accepted college curriculum, we will never have the education to compete globally.

So, if we want this, then we have to train more people in hard sciences. (We need more lab techs and people who understand manufacturing. ) The other stuff has to become completely self funded.

Meaning, 95% of the college degrees, that women get, need to cost twice as much, and be paid for completely out of pocket.

And, i just don't think that, politically, this is going to happen.

Not wanting to vote for rapists...

Almost everyone in congress is a rapist and/or a pedophile. They can only get nominated to run if they "play ball".

And that means that the party has dirt on them before they even start. You do not get on the ballet if you are clean.

We live in a debt and death paradigm. Since the introduction of central banking, all wars are bankster wars.

In order to keep people working for money, we must spend as much money as possible as wastefully as possible.

One of the best is to make bombs and drops them. Lots of money in, and then boom, nothing.

If you want to stop this, stop using their "money" Start using crypto-currency solely.

That we have these kind of "wish-lists" and tried to hold them to politicians means that we have to grow up and face facts. We have to learn to recognize narcissists / sociopaths and bar them from running for office.

We have to have an actual, enforceable, contract with politicians and hold them to their promises legally, and bindingly.

And, we must learn the difference between a pie in the sky wish list, and a list of things that are obtainable and something to work towards.

All images in this post are my own original creations. except the one stolen from f-c-book
+62 Written by @builderofcastles | View post on Steemit.com