As a parent and a dedicated connoisseur of quality games... I'm always on the lookout for great, well-crafted games to present to my children. Too much of the games that are presented as "kids games" are terrible time wasters or horrific free-to-play cash cows... or even worse, adrenaline soaked brain rotters... I want to have my children grow up to appreciate games as both an enjoyable past-time but also a genre that is capable of real quality in both narrative and presentation.

So, when I'm looking for a game for my kids... it has to be well crafted with a great story, game mechanics with immersive music and artwork. So, the sort of thing that you would normally expect from a quality book, film or any other art or narrative form. After all, you can get pretty terrible representations of books and other stuff... but you wouldn't want to be presenting those to novices (children...) as something to shape their view and appreciation of the genre!

Also... something featuring a strong female lead is always a plus!

When I was young, I remember my father giving me typing style games... so games that were "educational" in nature... but with a gaming component. So, the one that I most remember was this game where you would be typing words... and the words per minute metric would relate to how fast your runner would be running to complete a sprint or a marathon. Wrong words would result in a fall and lost time...

So, as my oldest has reached the age where she should be more capable with typing... I've been on the lookout for typing style games... and this where Epistory crossed my path.

Epistory is a 2016 game released by the studio Fishing Cactus for PC and Lunux. At it's core, the mechanic for Epistory is typing on a keyboard mashed together with a RPG-lite growth mechanic... but there is such a great story (actually, quite heart-breaking!) and art and music style that has been loving crafted into the world.

According to their Steam Store blurb:

Epistory immerses you in an atmospheric action/adventure game where you play a girl riding a giant fox who fights an insectile corruption from an origami world. As you progress and explore this world, the story literally unfolds and the mysteries of the magic power of the words are revealed. 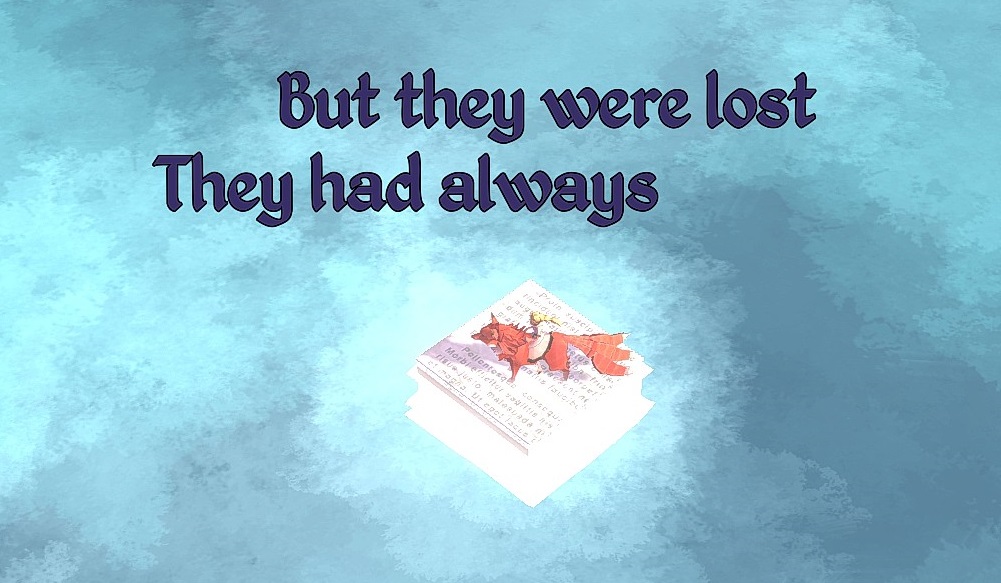 Epistory tells the story of a girl and her fox... You start off like most games... lost and with no idea what is going on. That is a pretty standard RPG trope... but in this case (as you reveal more of the story...) it really makes sense. Without giving too much away, the story describes the growth of the avatar (as told by the narrator, and with interjections from the avatar herself) until the present day... I can't go too much into it without spoilers... but let us just say... it is heart-moving and really engaging. When you hit that last crescendo at the end... WOW! It is beautiful.... 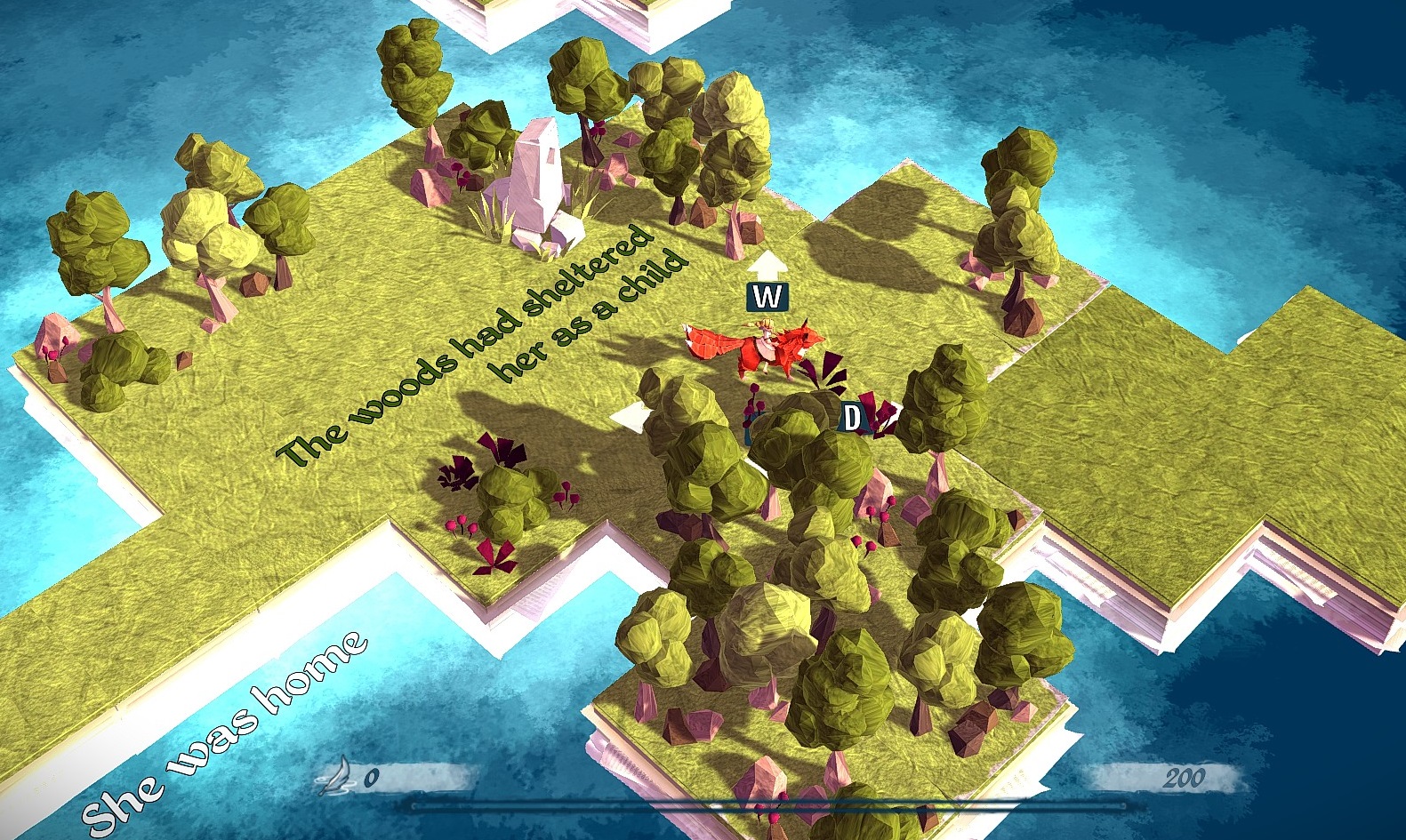 Control mechanics are very simple... WASD for direction, and with no jumping or anything like that... so, despite the "3D" appearance of the world, it really is pretty much a 2D isometric affair. Mouse is not required, all the interactions are done via the keyboard.... Console gamers will have to leave their controllers at home! There is no way you are going to do the requisite typing with your funny little toys! 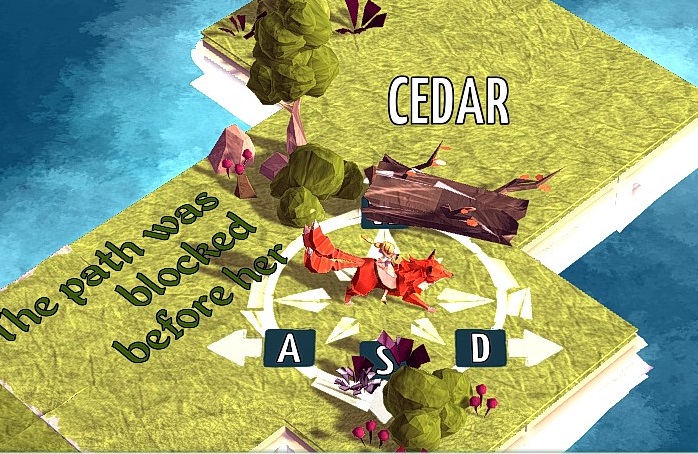 Hitting Space or Return will bring up the typing interface... this is where you are rooted to a single spot and the keyboard becomes active for typing the various words that are on the screen. There is destructible terrain, puzzle interfaces... and incoming monsters that you have to destroy by typing. Interestingly enough, the words are all linked by topic to the type of game object that it is attached to. So, wood will have wood type words, stones will have geologic type words and so on...

Something that was quite interesting and definitely a great design choice was the Adaptive Difficulty with typing. I'm a decent enough typist... but my children are only beginners! So, having the difficulty ramp up or down whilst you are playing is definitely a good idea. That said, there were some pretty hairy moments during the incoming enemy stages where I was frantically typing and switching element modes whilst juggling various priorities... and by that time many of those words were damn HARD! It would have been easier if I failed more often, resulting in an easier difficulty... but my pride wouldn't let me throw fights! Unfortunately, I don't have any screenshots of epic epic fights with multiple monsters of different element types and speeds coming in within a hair's breadth of touching (killing...) my avatar... too busy typing to hit the screenshot button! Plus, having the screenshot splash screen would kill me.... 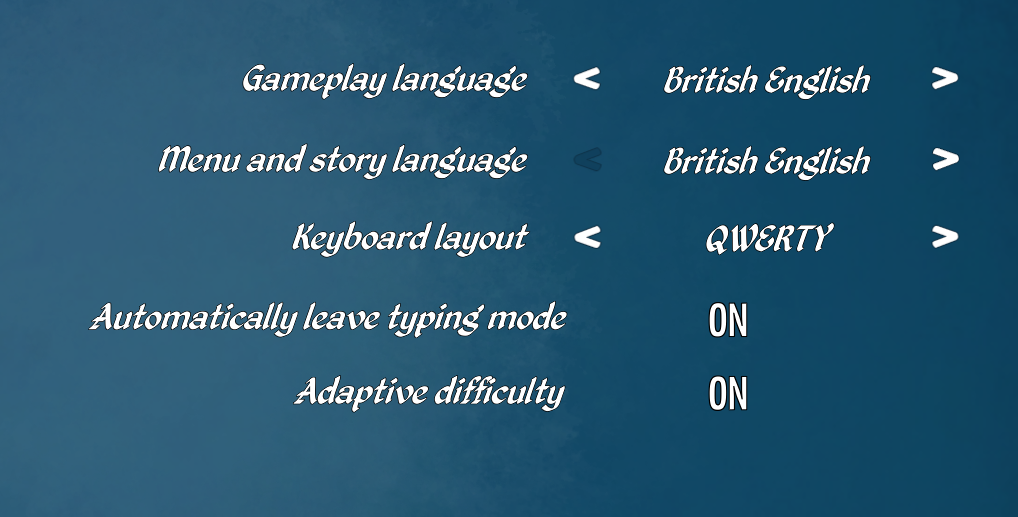 Speaking of important... being able to change the Language settings is pretty important for a typing based game.. in fact, there is really wide variety of non-English languages (and keyboard layouts) to also choose from! The one that matter most to me was the ability choose real English instead of American English... with it's overabundance of 'z's and weird weird spellings.... seriously, just because you had a War of Independence didn't mean that you had to change everything... although, if you could change to logical metric system (instead of the system that was developed by the empires that you REBELLED against...)... that would be super handy for the REST OF THE WORLD! In addition to the regular word dictionary.. there are some of the most common password entries as well! Please don't ever use these.... As I had mentioned in the introduction, there is a light RPG element to the game... as you chain together more and more words in a time limit, you gain "inspiration" (aka, XP) to level up your avatar. This is the level-up screen, and I won't spoil it my showing what other upgrades are possible... mostly they have to do with elemental powers and upgrades... or upgrades to movement and word-chaining. I found that I had maxed out the XP levelling mechanic by about three quarters through the game... but that will really depend on how well you type. 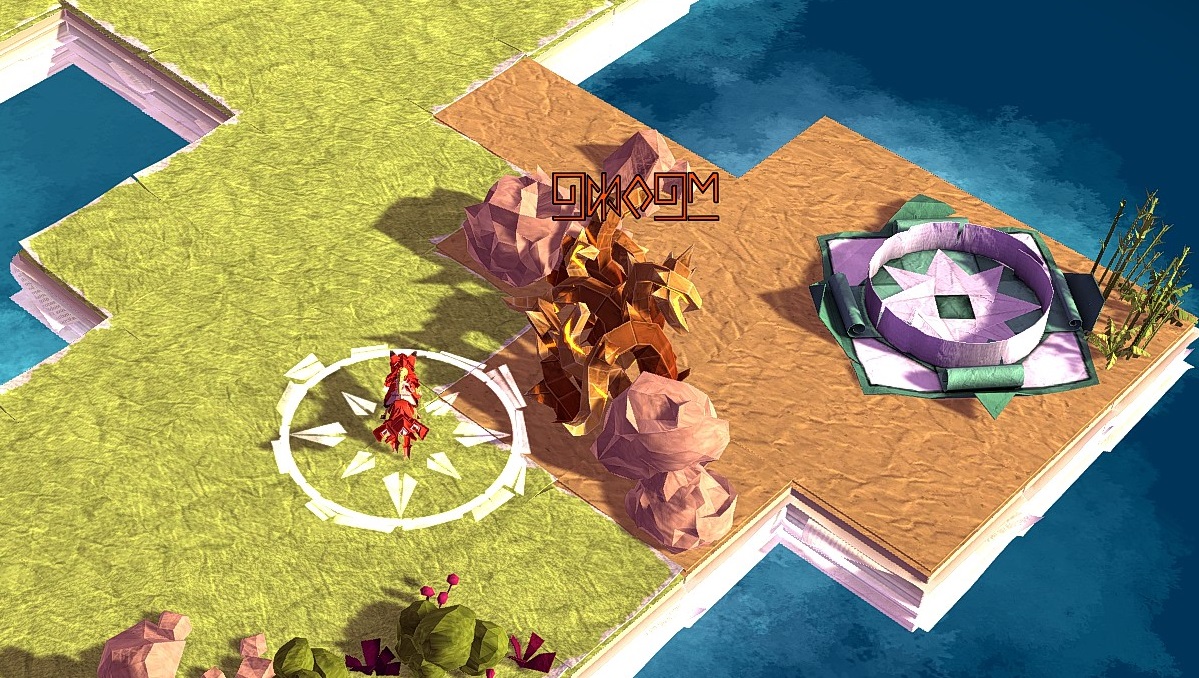 There are various paths that will be blocked until you unlock the requisite elemental power to read and type the words. Each elemental power also has certain special affects that can be applied to monsters, to help with the crowd control element of battles. For instance, Fire will help burn away additional words, Ice will freeze, Spark will chain damage to nearby enemies and Wind will push monsters away. It is possible to brute force to an extent (not use too much of the elemental effects)... but it is much more elegant and effective to switch up the powers for the appropriate occasion. Plus, there will be monsters that are only damaged by specific elements.

The Presentation and Performance As you can see, there is a pretty amazing papercraft aesthetic to the visual presentation... it all ties in the narrative... the story is presented in a narrative style similar to Bastion, with a narrator speaking as you traverse the paper world, and with the inner voice of the avatar sometimes also chiming in to flesh out her inner thoughts. As you unlock a new game area, you are treated with a pan-out as the game world unfolds (paper like...) to reveal new areas to explore! I would never tire of this moment... it is such a beautiful unfolding as the camera backs away and swoops around in a 360 degree spin... it is an epic and awe inspiring animation!

Speaking of inspiring... the music is incredibly well suited to each situation... with battles and exploration taking different music... and with each game area having music specific to the aesthetic of the area. As a musician, I'm particularly attuned the sounds and music of a game... however, the best thing is when it emphasises and enhances the game... without being too overt... and in this game, it is well crafted and masterfully applied! For a full aural treat, play with headphones... noise cancelling ones... you won't regret it!

On the XPS15 laptop (GTX1050, for full reveiew specs see below), it had no performance problems... it's not a particularly graphics heavy game... and the limited animations and screen refresh rates are not critical or punishing to a dedicated graphics card. With an integrated card, I have no idea... you will have to check for yourself, but I suspect that it should be fine with most of the newer Intel/AMD integrated graphics. Despite the fact that this was a game that I purchased for my child... I was completely hooked by the loving presentation and the beautiful story. It is rare for me to just play a game to competition in a series of sittings without being distracted by other shinies... but I did this with Epistory... again, I can only stress how beautiful that game was!

The developers have another typing based game released... Nanotale, which is a spiritual successor to the game Epistory. If it is anywhere near the level of love and care that was put into the original... I will definitely again be hooked!

Get this game... for yourself... and children!

Steem-Monsters (aka the best blockchain game out there!)

Humble Bundle Subscriptions, it's a no brainer for the dedicated gamer! 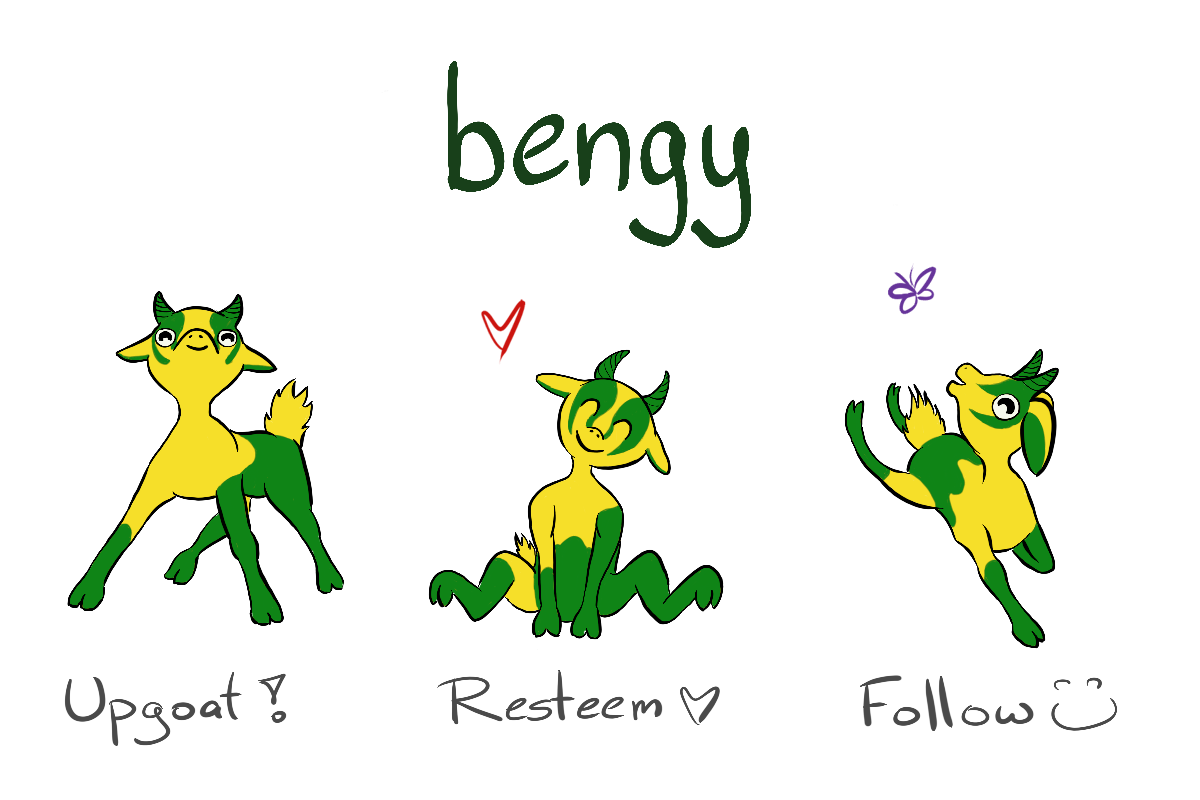