The Humpback Grouper, a Princess and a Luxury Meal - 1001fishes project

During the beginning of the week I've painted a Humpback grouper (or Panther grouper but I'll stick to Humpback because of the whaaaalesss <3), so I will dive with this beautiful yet highly saleable on asian luxury food markets. But first of all, let's talk about the man who described it. 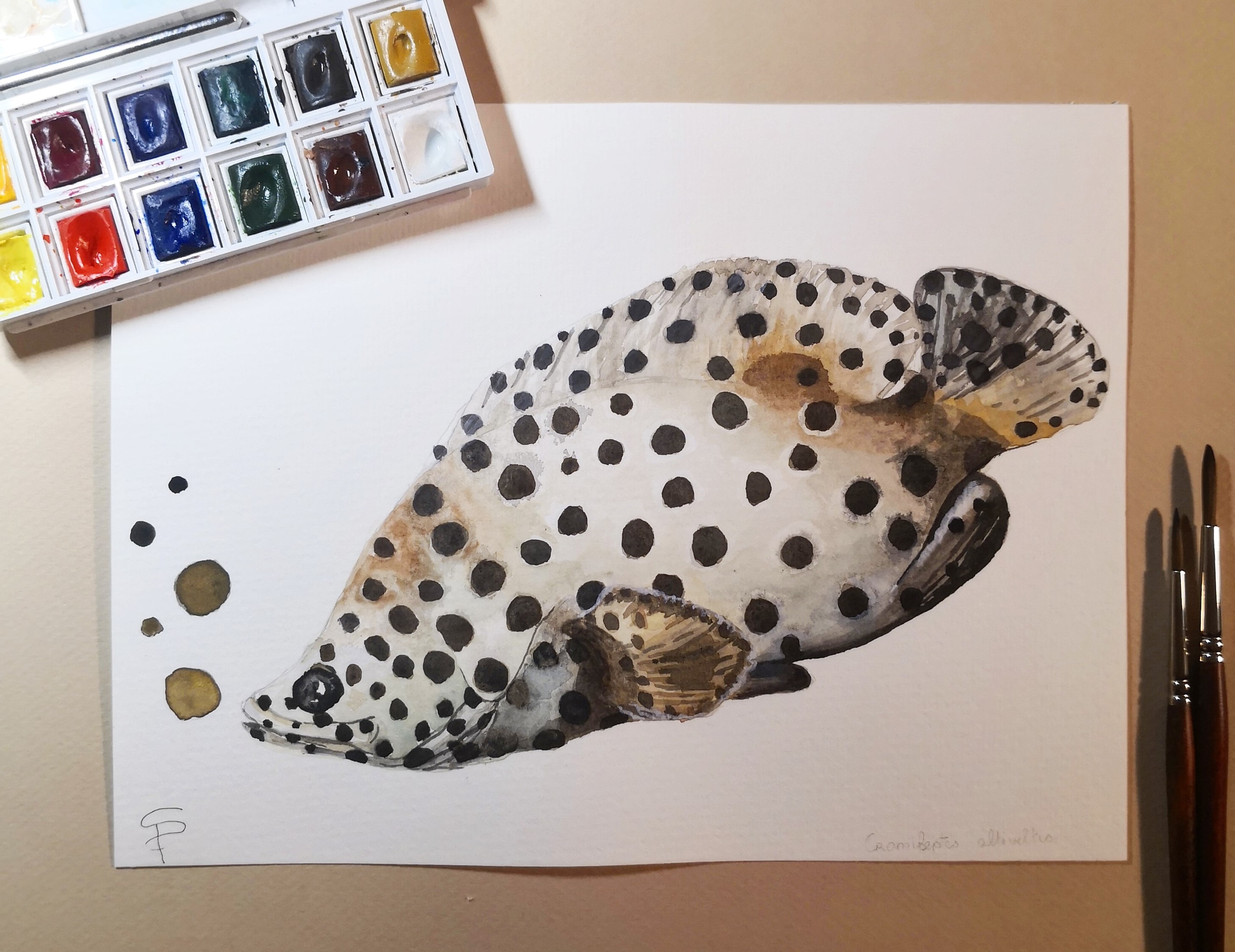 A very French man and a big book

If your not native French speaking you will likely struggle to pronounce his name (I dare you to try). Achille Valenciennes, was a french zoologist from the XIXth century. Student of G.Cuvier, I'll eventually come to him (because he have played such an important role in fishes natural history) . Both created the most ambitious ichtyological book (headache giving term for fish related), Histoire naturelle des Poissons, en 22 volumes, literally translated : Natural History of Fishes, in 22 volumes. And since this book is way more interesting than A.Valenciennes's life. I'll talk a bit about it. 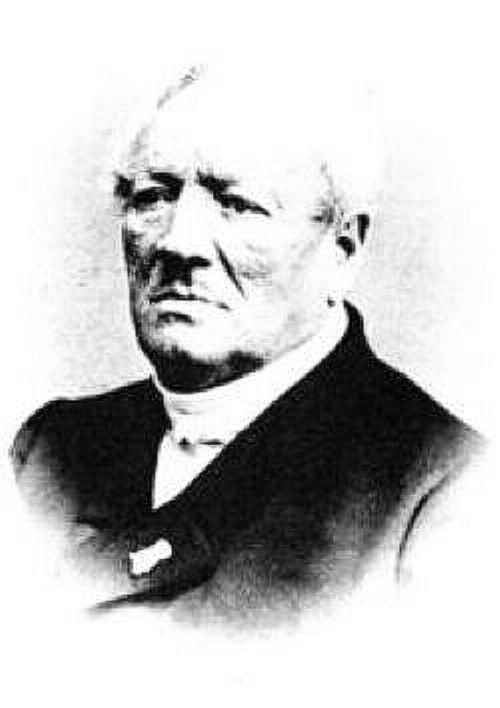 Started by G.Cuvier in 1828 then carried on by A.Valenciennes, it took 20 years to complete, with the 22th published in 1848. Even if Cuvier and Valenciennes weren't field researchers, they have used the tremendous knowledge, material, and fishes collections of the french Natural History National Museum (check it out if you spend some time in Paris ;) ). With a great network of correspondents and observants distributed all over the known world, they gathered data from 4514 species which contains 2311 newly described ones ! Thats why we will sooner or later talk about G.Cuvier. This huge compilation of fishes was the first stone of the 12 000 species described at the XXth beginning, for around 22 000 nowadays ! (these two numbers might seems big, just keep in mind that the oceans are 70 percents of our planet, and I haven't find any relatable source so take them with care).

One of the 2311(!) species described in their lifelong work is our grouper, Cromileptes -from Ancient Greek roots : croma = color - leptos = delicate for the sweet looking juvenile dress and altivelis from Latin roots : altus = high - velum = sail for his (unusually) long dorsal fin. Its common name is not that appealing, he have a bump on the back of his head, and he looks close to a grouper sooo Humpback grouper... BUT I have some more exciting names to bring up ! Related to a Monaco's princess !

In 1960 in Monaco, the first aquariological international congress took place, at this event they named the Cromileptes atlivelis from a dress Grace Kelly was photographed in. This photograph, was taken in 1954 during a script reading of The crime was almost perfect by Hitchcock. And mérou is the French equivalent of grouper, from the Spanish mero. 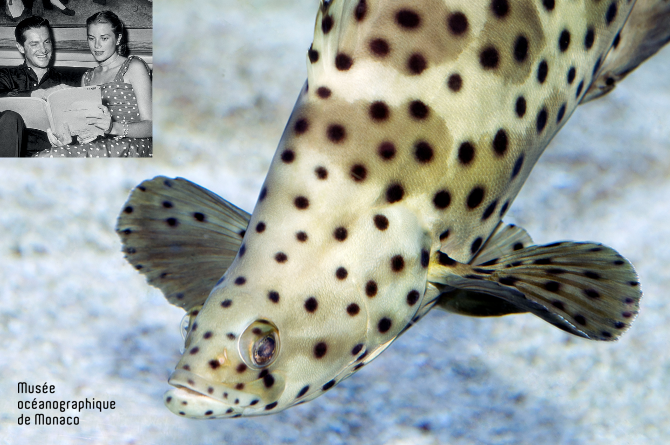 Our 'little' fish is found in the indo-pacific region, from 2 to 40 meters deep, usually in reefs with a lot of hideouts. When he is afraid or asleep the large brown spots you can see on the photo above appears. He is a predator, hunting on the lookout for small fishes and crustaceans. An interesting fact, but not uncommon, he is hermaphrodite and protogynous : hermaphrodite means he have a gender change during his life, and protogynous (from proto = first - gynos = female) means that during the first steps of life it's a female (1-2 years old), and become a male after (9-14 years old). He have a solitary behavior except on the spawning season.

In 2007 the IUCN got him on the vulnerable list of species. But nowadays, even if we know he is threatened there is a lack of data, so he is under data deficient with a decreasing population. And here is why.

In Asiatic countries, the Humpback grouper is a luxury meal, I have found online between 90 MYR (Malaysian's currency the Ringgit) arround 40 EUR, and 990 HKD (Hong-Kong Dollars) so up to 115 EUR per kilogram ! To get an idea, the Salmon is under 17 EUR in France. If usually fishers tend to catch them alive, some of them are using Sodium Cyanide and kill everything around to get the precious fish. We can add that C.altivelis juveniles are collected for the aquariology market, because he is an easy and famous saltwater fish to keep (I have found some 5-7cm arround 45 USD), even if he can live up to 50 years old for a good 70cm long ! Fortunately, they can be spawned in captivity, and since the late 90' and the beginning of 2000, they have been produced in floating cages in the Philipinnes and Indonesia. 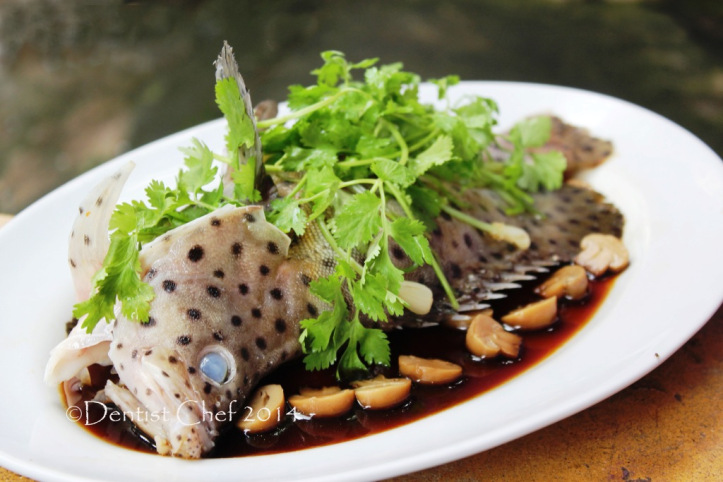 With the market exploitation, especially by Hong-Kong, C.altivelis is declining on his whole repartition area, and the traders and fishing men have to go further and further to get some Humpback grouper. But the increasing price of the Grace Kelly's grouper (yes thats my translation, the international world lacks of cute and fun names for fishes), encourage the fishing effort and overexploitation. Some countries are starting to protect this specie like Vanuatu and Australia. And a few aquaculture projects are started to try to supply the Central Asian demand for live reef fish, trying to release the pressure on wild populations.

I wasn't expecting to get that long, diving into this fish and Valenciennes's life I thought I wouldn't have a lot of material... then I searched on the Internet, and found that Cromileptes altivelis is a world renown fish, for both his aspect... and taste.

That's all for me, Take Care.