The Dolphinfish, Linnaeus pupils and a space shuttle - 1001fishes project

I found myself playing around with some china ink and watercolors, and It was super fun ! I hope you enjoy the result as much as I loved the outcome ! :) Today I'll talk about the Coryphaena hippurus, and as it is a Linnaeus described specie, I want to emphasis one of his pupils and a famous vessel nammed Endeavour ! 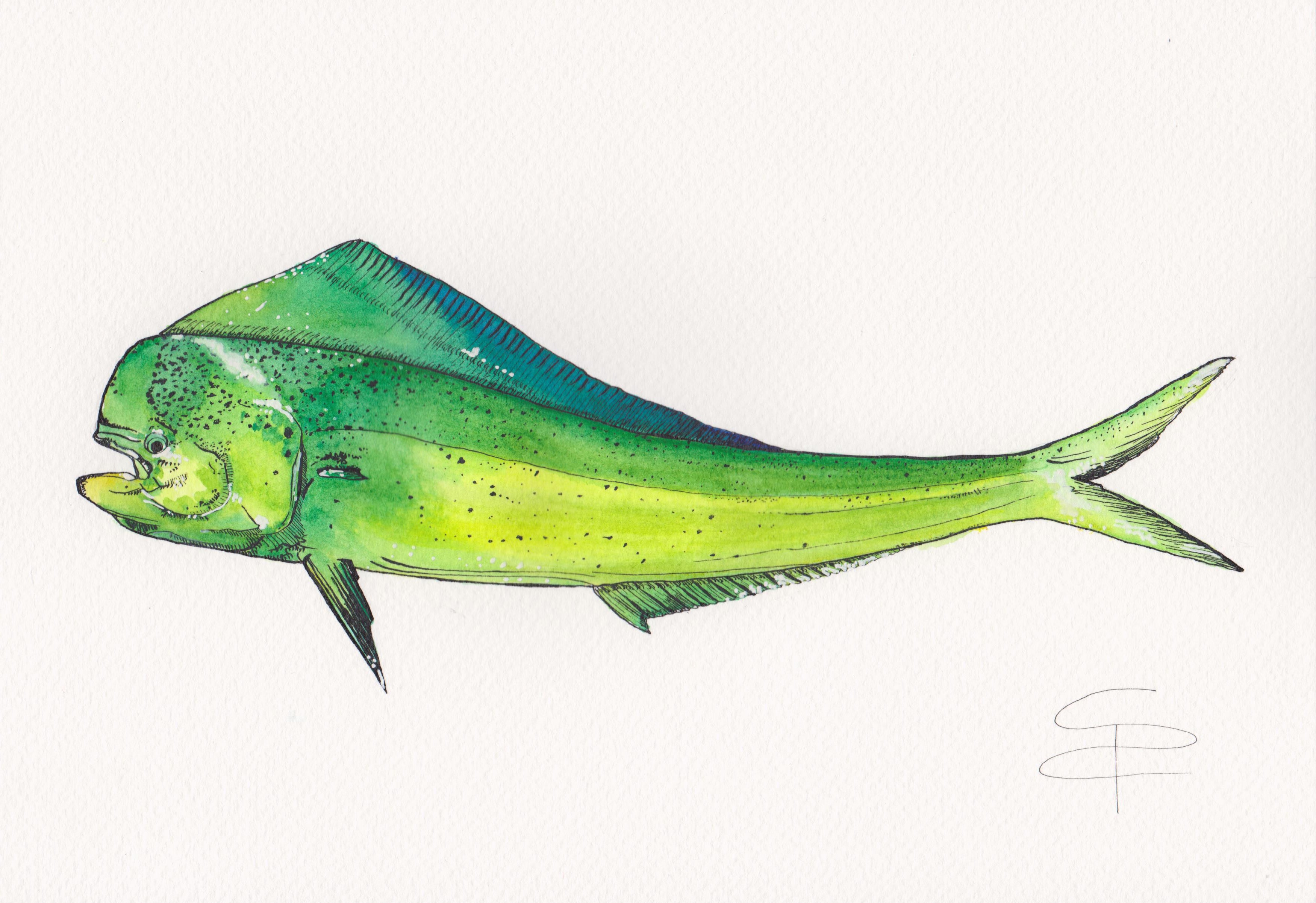 Linnaeus pupils around the world

As I said Carl von Linné have done a few explorations journeys, especially one in Lapland. He have worked with specimens brought back by fellow scientist, explorers, a banker and other Indian Companies' leaders. A lot of his students went abroad, some of them becoming really famous. Like Daniel Solander, whom get on-board with the renowned James Cook ! During that campaign they went across Oceania, and Solander gave his name to some Islands on the south of New Zealand : the Solander Islands. That famous trip was the 1768-1771 campaign of the Endeavour.

A famous ship and his descent

The HMS Endeavour is a world renowned vessel, launched in June 1764, and was commanded by Lieutenant James Cook during the Oceania discovery journey from 1768 to 1771. In 1770 it became the first ship to reach the Australian east coast. It was a 29.77m full rigged ship (see lien post), and have been replicated in 1994 and landed next to the Australian National Maritime Museum in Sydney. One of his descent is the NASA OV-105, a space shuttle named after it : Space Shuttle Endeavour.

HMS Endeavour off the coast of New Holland by Samuel Atkins c. 1794

Operating 25 missions between May 1992 (mission STS-49) and May 2011 (mission STS-134 to the International Space Station). Constructed to replace the Challenger space shuttle, the Edeavour Space Shuttle is now displayed at the California Science Center. And as the astronauts in their extravehicular suits, our open sea fish is known for his vibrant goldish (does that word actually exist ?) helmet.

From a helmet to Dolphinsifh

Its a widespread specie, with a large variety of nouns founded in the world. The scientific name is Coryphaena from ancient Greek roots : kórys = helmet, phainô = show - hippurus, and I am so sorry but haven't found from what roots comes hippurus, but some good news, there is other names for the Coryphaena hippurus. One of them stands out : mahi-mahi coming from Hawaiian language and meaning very strong. In the Mediterranean seas its known as dorade coryphène, or lampuka in Malta island.

Despite the fact that the coryphaena is widely spread across all the temperate and tropical seas and oceans, its commercial value is quite high (I've found around 80USD per kilograms). A lot of fishing, from commercial, to sport fishing, create some local overexploitation. But mahi-mahi have some tools under his belt to thrive. This well known and studied fish grow up pretty fast, its lifespan is about 4-5 years maximum, and usually do not exceed 2 years ! We can find them between surface and 85m deep. The biggest Dolphinfishes can reach over 2 meters long ! Kind of bigger than our previous 20cm fishes uh ?

Cannibalism is the solution

Different studies found that there is a lot of cannibalism as they grow. In captivity the survival rates are around 4 percent because of that factor. I haven't read that, but I think the cannibalism is a good way for a large scale reproducing, fast growing specie, to optimize resources by eating the weakest ones during the whole growing phase. The IUCN have classed them into the Least Concern with a stable population (yay ! since the start of my project it is the first fish not threatened or on a population decline). And here's good news for the fish meal enthusiasts ! The Environmental Defense Fund and the Monterey Bay Aquarium are classifying the C.hippurus as top fish to eat with a little ecological impact, when caught by line/pole. In opposition to long-line fishing witch use hundreds of lures/baits on a 50m or more long line, and have a great chance to capture non desirable species, like sea turtles or sharks (killing them btw).

Hoping you've followed me trough this one, I've found myself pretty scattered between a lot of different informations, trying to tie them up into an interesting story. But I think its more like a fact checking list more than a story. I will try to get a better overview of my story next time ><, thank you, and take care !