Visually the entire history of Bitcoin has compelling evidence of my posited expectations for fractal acceleration:

Click here to view the live version of the above chart.

That updates a chart from my blog Bitcoin’s Whiplash Bear Trap 3 months ago:

Tangentially note, Bitcoin ended up bottoming in December 2019 exactly according to my prediction from that blog:

so a higher target such as $6.35k is also possible:

Also tangentially note in my blog Upwards Bitcoin Price Acceleration Imminent that Bitcoin and the altcoins are ostensibly again bottoming again exactly per my recent predictions:

Now there’s clarity as the scenario from my blog 13 days ago Bitcoin Movements Ahead on the Way to the Moon has come to fruition:

The repeating fractal pattern portends another spike to ~$22k later in April. And then in the middle of May a blow-off peak of ~$35k although the spikes could be progressively higher because acceleration is a non-linear projection. 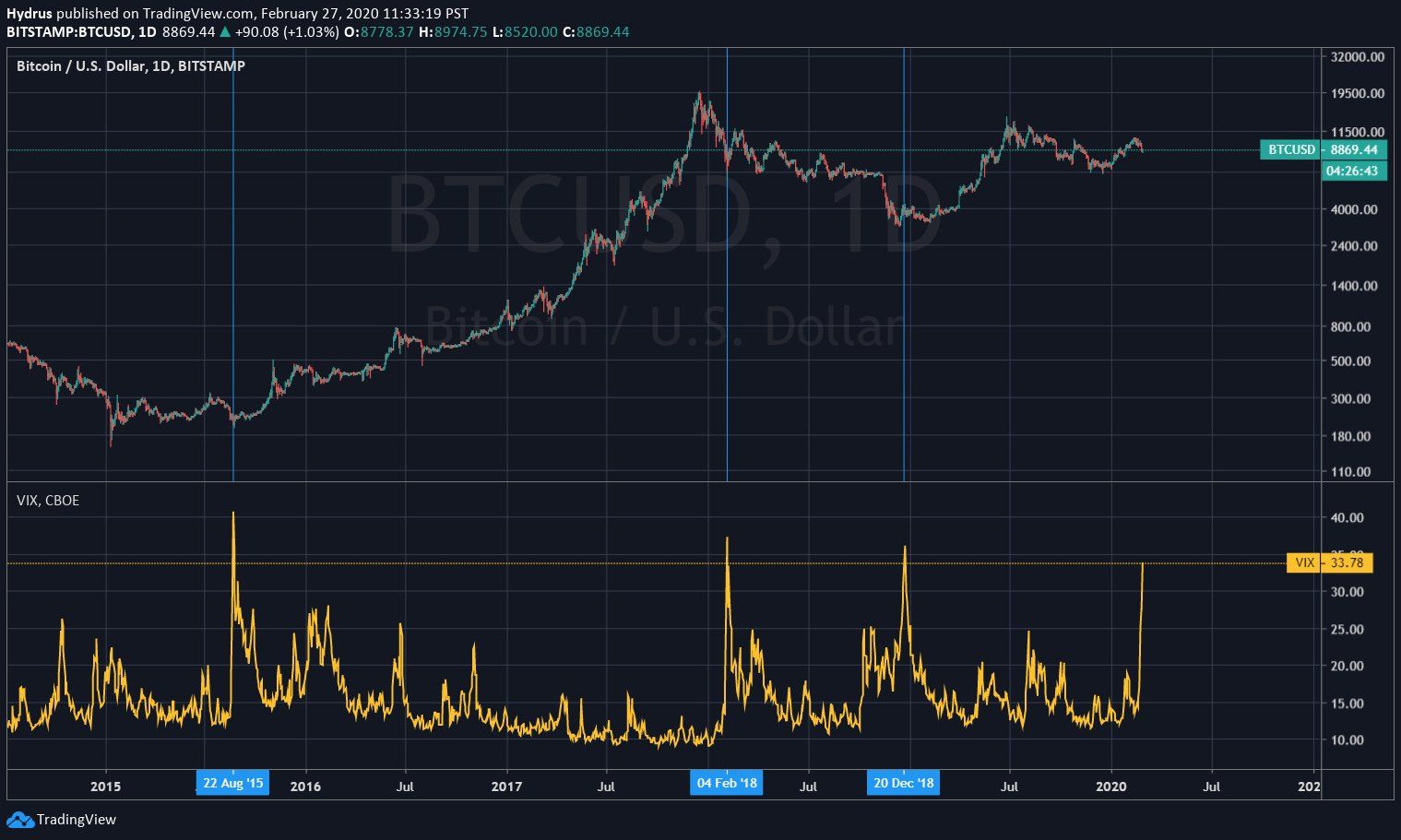 spikes in the VIX correlate (spurious?) with Bitcoin bottoms 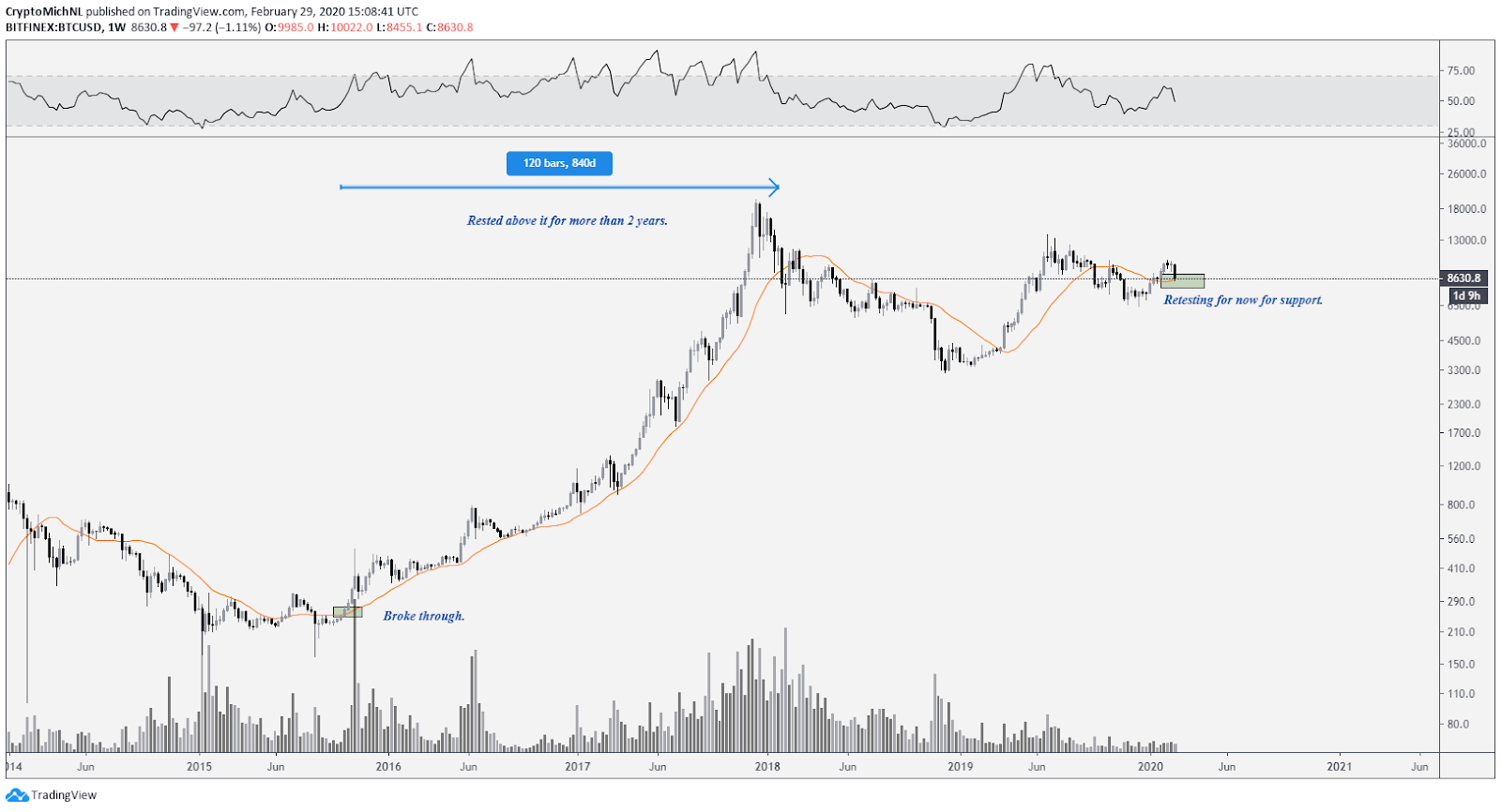 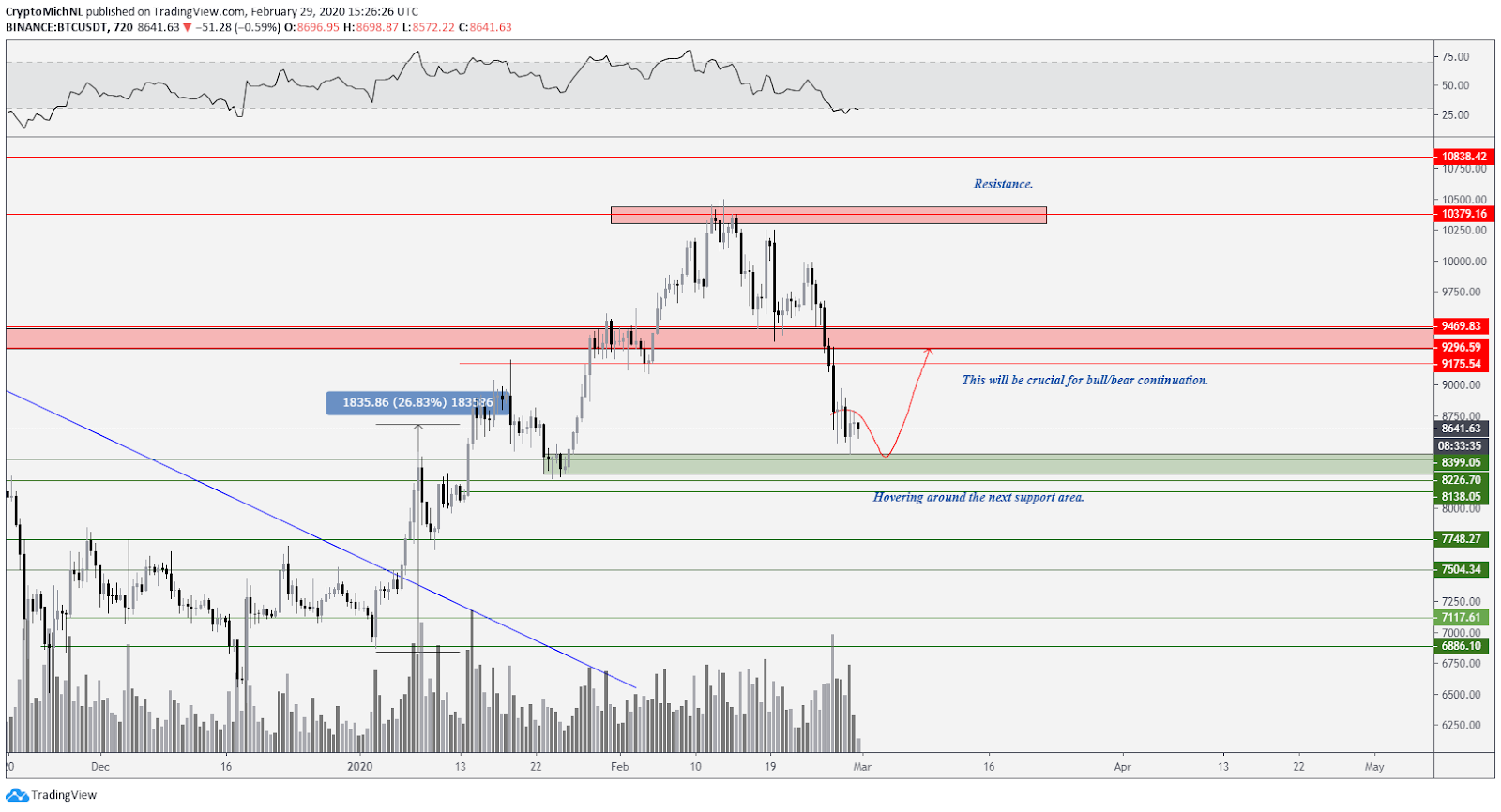 I decided to share my findings in this blog after reviewing my hypothesis to debunk the F.U.D. of the following chart: 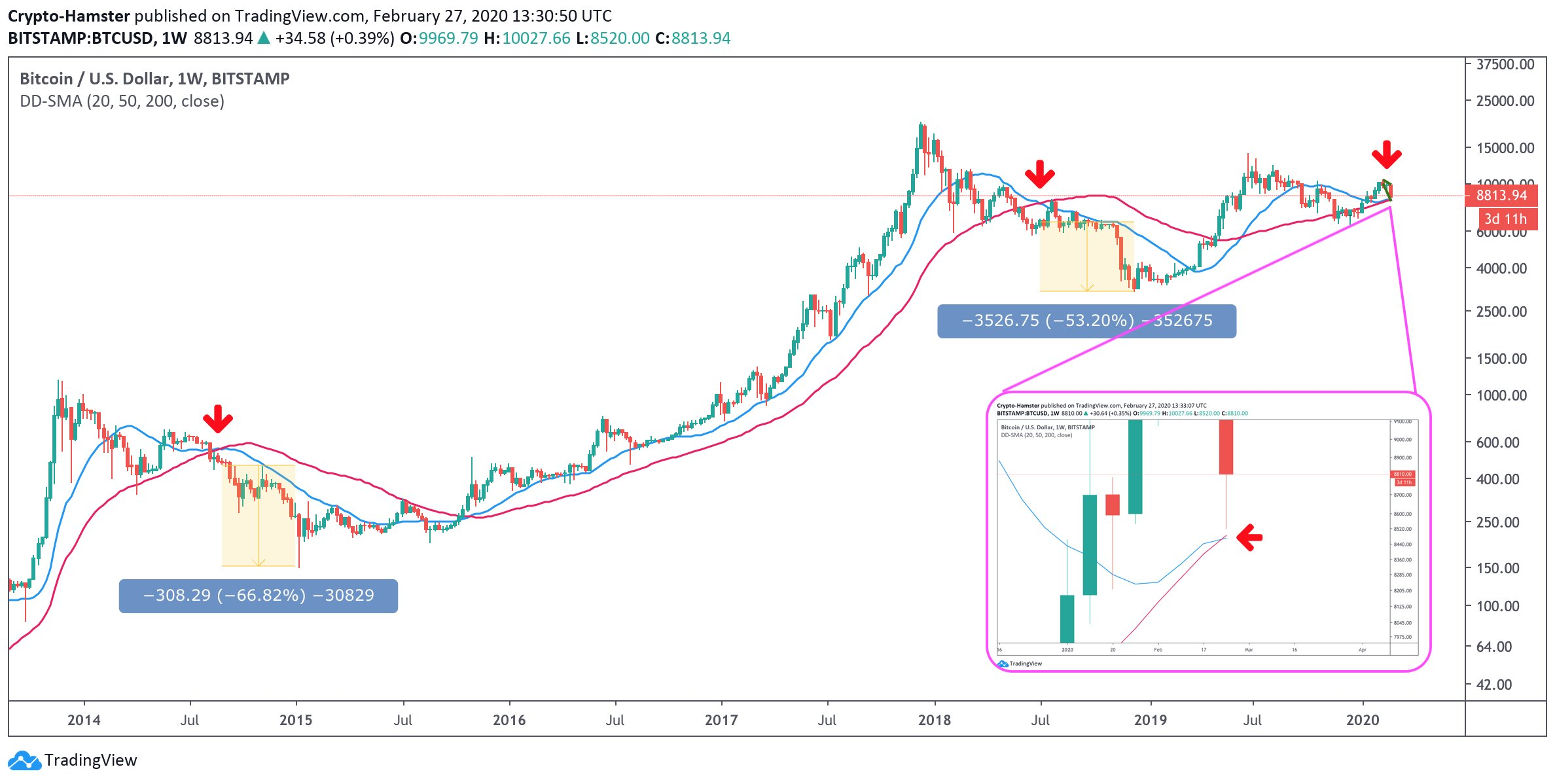 Bitcoin Fractal Indicates a Massive Price Crash to Below $3,000

However, in addition to the turning up of the 20 WMA (isn’t currently declining, thus won't go very far under nor stay under the 50 WMA very long if the Bitcoin price increases soon), the bullish crosses (50 up over the 100 WMA in December and recently 50 up over the 200 DMA), I had rebuked that sort of idea for a fractal correlation 3 months ago in my Bitcoin’s Whiplash Bear Trap:

I also refuted the more extreme bearish predictions in a comment on my prior blog:

Note though there is a speculation (c.f. also) by Willy-Woo that Bitcoin could crash. Here’s the most extreme idea for a crash to $1000:

That extreme idea depicted in the chart above is incongruent with the topological interpretation I posited in this blog of mine. His idea makes no sense because he is presuming topological equivalence between a -30% decline to a -85% decline (at the neckline lows to the left of each of his arrows)!

The F.U.D. chart idea above isn’t congruent with the topology I posited in McAfee’s Dick Math: illuminating Bitcoin’s ACCELERATING price:

So 7→8 should repeat as an enlarged fractal pattern 10→11 (11 is coming) — not repeat as 8→10 as implicitly assumed by the aforementioned F.U.D. chart idea. For 7→8 to repeat as 8→10 would violate both my fundamental reasoning/conjecture and also the fractal nature wherein patterns are complex deterministic chaos — not simplistic, repeating trends (i.e. that most everyone erroneously thinks Bitcoin is decelerating due to maturation of adoption and speculation).

And discussed fundamental reasons for this acceleration:

Let’s tie this into the entire Bitcoin price history:

The white, horizontal dashed line is my posited bottom for this current correction before moving back up to the top of the bullish wedge and probably rocketing up from there.

The thin brown, horizontal, dashed lines are the posited breakout from top of wedge and projected rise, as correlated to the prior bull market.

Note the duration of the current bull market underway is ~0.8X to 0.9X the duration of the prior bull market, measured and computed by comparing the relative duration from the peak to the bottom(s) of the decline and/or the first significant peak from the bottoms. Thus the aforementioned breakout (i.e. above the top of the bullish wedge) is posited to occur between January and April — mostly likely March.

Additionally the amplitude of the current bull market underway is ~1.5X that of the prior bull market. Thus the thick brown, dashed lines are the posited price levels if this amplitude, amplification adjustment factor is applied.

However, Bitcoin isn’t linearly accelerating (nor linearly decelerating if you prefer that erroneous interpretation) and I’ve posited that 10→11 correlates topologically (and a fractal pattern match) to 7→8. And note the spike down right before the rocket to the moon:

But these topological and fractal correlations are not isomorphic, homomorphisms. There’s a complex deterministic chaos, and we’ve previously posited (c.f. also) that facets of the 5→6→7→8 pattern will also factor into the outcome of the current bull market underway:

More bullish analysis which was also conceptually included in a more detailed analysis I posted in mid-November (almost two weeks ago): 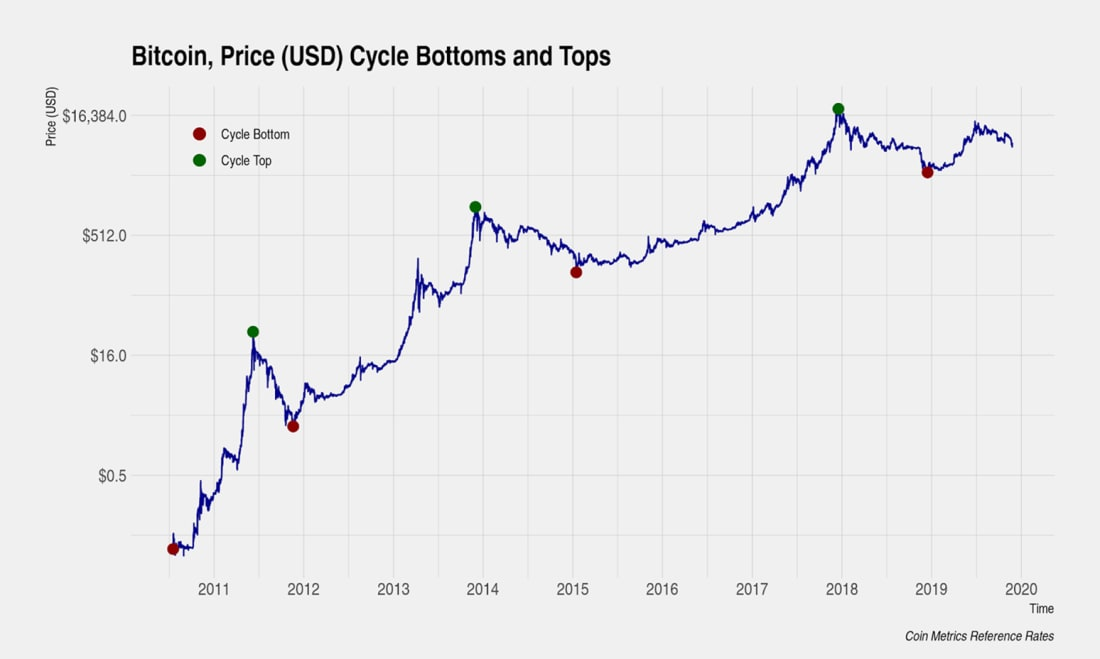 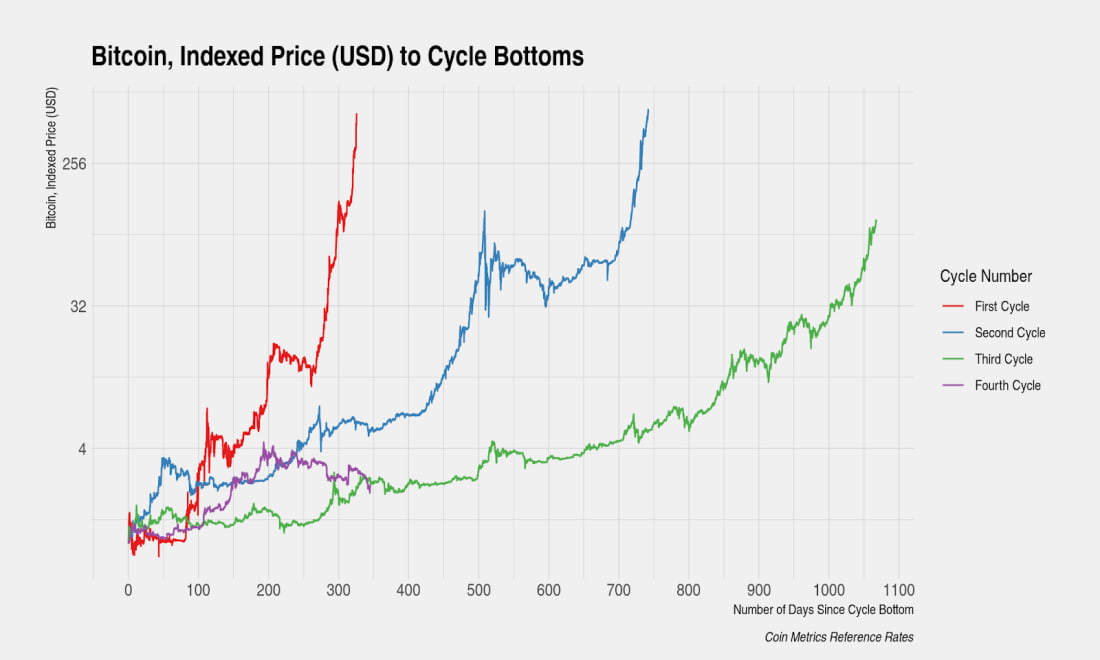 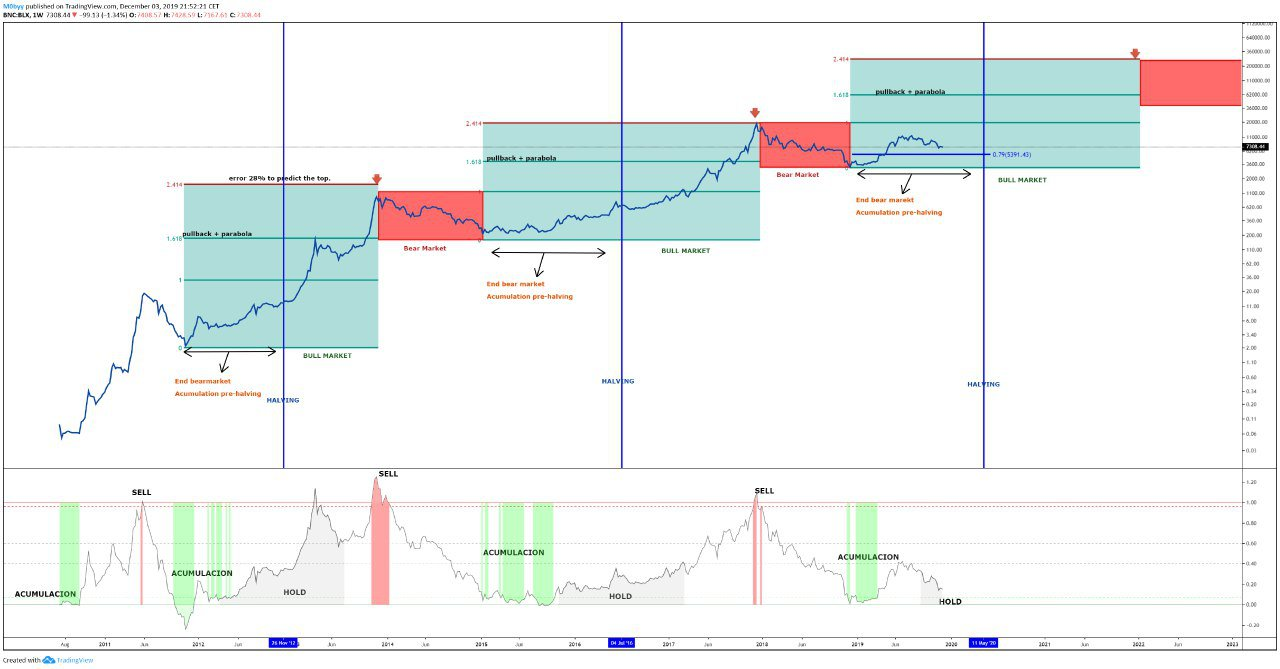 Dr. Albert Bartlett stated, “The greatest shortcoming of the human race is our inability to understand the exponential function.”

Imagine a caretaker that comes to check on his lily pond once a month. It requires 36 visits (i.e. months) for the pond to be completely covered with lily pads. But on the 35th visit the pond is only half covered. If not thinking in terms of exponential math, the typical human caretaker’s linear extrapolating, visual mind will be fooled into thinking there’s 35 more visits after the 35th visit before the pond will be fully covered. 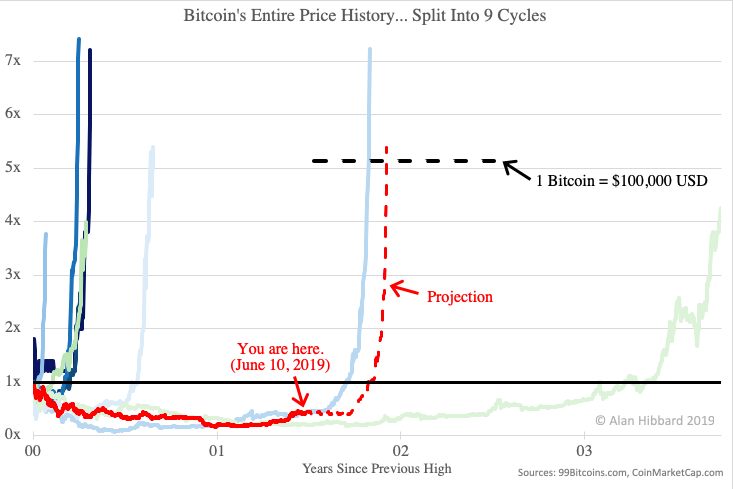 Remember my hypothesis is that a confluence of fractal patterns (combined with the fundamental reasons that legacy Bitcoin is being readopted as the impostor Core softfork will soon be kicked off of Bitcoin) means the acceleration prior to $31 peak in June 2011 will be repeating.

So that to-da-moon rocket to $2.5 million could occur by late 2020 or within 2021. Whereas, longer-term Bitcoin Fractal Projects an Infinite Price as the U.S. dollar loses its reserve preference after 2032 or 2036.

Before June 2011 there was a stampede to buy Bitcoin while nearly no one knew about it and new early adopters were going bonkers for its future potential.

Subsequently the long hangover waiting for some new reason to rush into Bitcoin. In 2013 ASICs arrived for mining and and so the increase in difficulty kick-started a rise in the price that domino-ed into FOMO leading to the 2013 peak. Here’s a pertainent excerpt from my blog Precisely Why Bitcoin Is Re-accelerating:

Six months ago I blogged in Secrets of Bitcoin’s Dystopian Valuation Model: 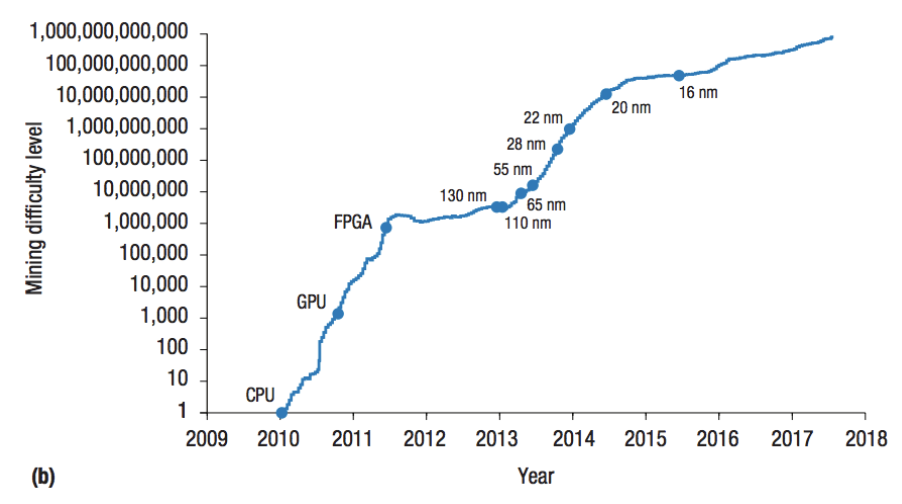 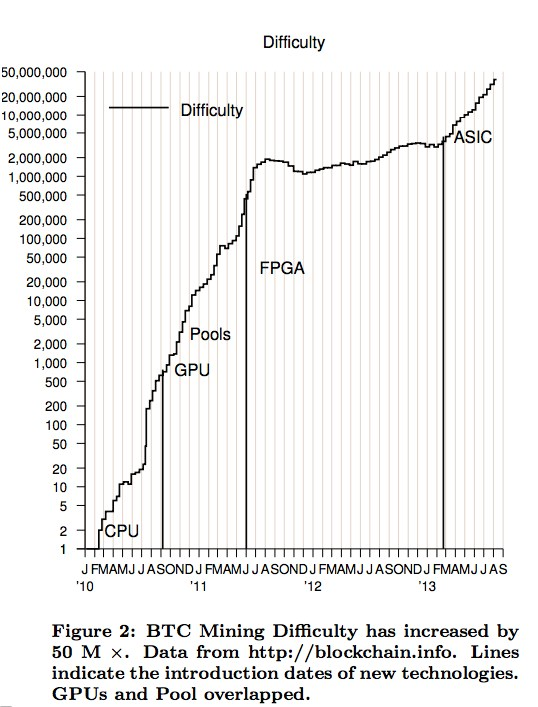 Uh oh, some of you may now really be contemplating if I’m Satoshi. 😲

So now we know why cryptocurrency scales so much faster to monetary dominance than the 1000s of years that gold required:

Compare the periods in the charts above to the following chart and note this is the reason the following interpretation is topologically incorrect:

Note that in 2013 which was the corresponding topological juncture as current fractal pattern, the price peaked at 20 times higher than the stock-to-flows model price. So that projects a ~$2 million peak price in 2020/21: 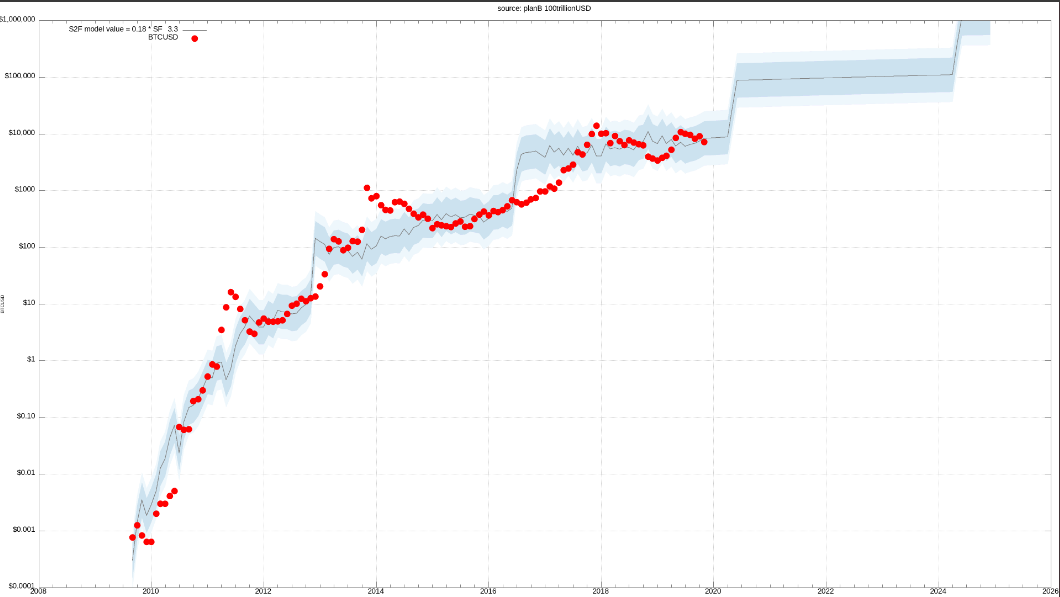 After 2013 there wasn’t anything to rush into until Ethereum spawned an ICO Tulip mania with the ERC-20 copycoin crap. That FOMO insanity was able to push the Bitcoin price up a nosebleed peak in 2017.

There’s really no reason to rush in now — the general public thinks Bitcoin is a scam and the altcoin greater fools are depleting. That is except for being able to move capital out of the accelerating, global pandemonium:

And if that hypothesis is correct, the mad rush to obtain much more scarce legacy Bitcoin could recreate the stampede from before June 2011.

The posited topological, fractal pattern correlates to the following interpretation/analysis of the fundamentals:

Hey so I used to watch Columbo when I was a child:

Future Demand for Bitcoin is Monetary — Not Transactional

The entire concept of Bitcoin as a transactional coin for the masses was a scam by Core. Was never Satoshi’s intended design.

Future demand for Bitcoin must be monetary in order for the “going for the gold” stock-to-flows model of Bitcoin’s price to remain valid — contrary to the jealousy confirmation bias (because Ethereum due its mutability and centralization can never have monetary demand) in ‘Rationalized Bulls**t’ — Vitalik Buterin Pans Bitcoin Price Forecasts.

Legacy Bitcoin will be much more scarce because the $billionaire (and powers-that-be $trillionaire) whales (behind the curtain) are going to take most of it (and hodl it long-term) as Segwit donations, via a mad rush to mine legacy (as Core’s hashrate plummets with its mining difficulty stuck skyhigh preventing blocks from being created). And tangentially because a significant portion of the private keys for Bitcoin have already been lost, and more may be lost by those who die from the pandemic underway. Additionally the whales will attempt to trade this tainted Bitcoin for untainted coins, before the FATF freezes those tainted coins further reducing the supply. Additionally the skyrocketing demand for a safe haven asset with sufficiently high market capitalization which can be transported surreptitiously.

The ridicule of this blog in the pertinent forum discussion Long term advance notice! is indicative that — Bitcoin’s “go for the gold” monetary adoption stage (only for the uber wealthy because blocksize will be forever immutable at 1 MiB) — was designed to deal with the confirmation-bias, pride, sense-of-self-worth phenomenon “It's easier to fool people than to convince them that they have been fooled.” by enabling men to die impoverished clinging to the ridiculous belief that Bitcoin failed “because” the circus clown, designated-fall-guy Craig Wright was a scam artist who succeeded in destroying Bitcoin (Core), instead of recognizing the absolutely necessary monetary phenomenon poison pill that “Satoshi” (i.e. the globalist powers-that-be) designed into Bitcoin:

I noticed the Shelby's still peddling the same hypothesis...

Still dribbling about ‘legacy’ Bitcoin and now he's even snuck in a quote from everyone's favourite Australian impersonator. He needs to score some fresh goals to give that cred a top up. However I'm not so sure he scored any the first time round either.

Disclaimer: This is for your entertainment, not financial planning nor legal advice. Consult your own professional (perhaps licensed) adviser. I’m not responsible for any decisions you make after reading this post.